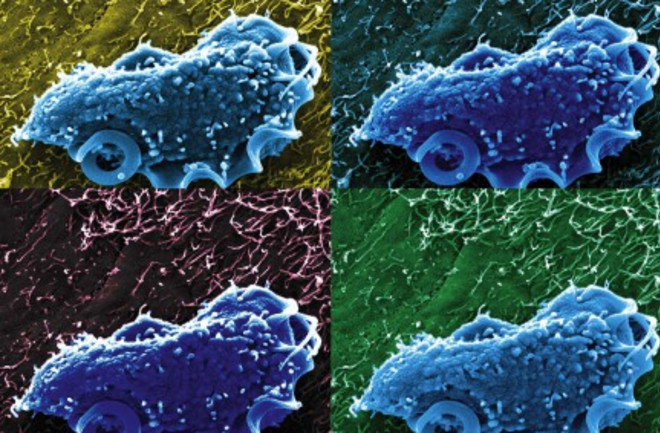 Growth rate is a fundamental aspect of life, a metric that can separate biology’s winners and losers. Even a small advantage can lead to complete dominance in short order, given the exponential scaling patterns of biological growth. Calculating growth rate is pretty straightforward when you’re looking at plants or animals, where it’s possible to measure an organism’s mass with relative ease. But what about microbes? How can minuscule changes in a cell’s mass be measured when the whole organism weighs just a picogram (10-12 grams)?

Over the last few years, physicists, biologists, and nanoscale engineers have joined forces to tackle this question. One camp has examined cells under the microscope, tracking their expanding diameters over time, but this method makes broad assumptions about cell geometry and takes a long time. A different approach pioneered by Scott Manalis, a Professor of Biological Engineering at MIT, combines microfluidics and resonating cantilevers to calculate a cell’s mass as it flows through tiny channels just three microns across.

The cantilever principle is functionally similar to a seesaw. Sit an NFL lineman on the opposite end, and you’ll have a much harder time moving up and down than if your playmate were a toddler. In the microfluidic chip, the cantilever (essentially a finger-like extension, the cell flows out to the end and back again) shakes at a predictable frequency based on the mass distributed within it. With a light cell inside, it moves quickly; heavier cells cause the oscillations to slow down.

This is all relatively well-understood physics, but what’s remarkable is that the device has enough resolution to watch cells grow in real time. Earlier efforts have kept individual cells in a single cantilever for ten minutes or more – long enough to detect a changing mass. But if you can only measure one cell at a time, larger studies of individual variation within a larger population, or a comparison of different types of organisms, will take a prohibitively long time. The latest study from the Manalis lab solves this problem by combining a dozen cantilevers in series, tracking individual cells as they flow through the system over about 20 minutes. This way, it’s still possible to watch each one for the necessary amount of time, but several cells can be in the pipeline at the same time.

Measuring the growth rates of individual cells is more than just a technically astounding parlor trick – it brings the microbial realm into view as a diverse, varied world where individual cells exhibit distinct behavior. When microbiologists lack this type of resolution, they default to bulk analyses, like sequencing all of the DNA in a scoop of mud, or measuring overall increases in cell abundance in a microbial culture. Such large data umbrellas can obscure important trends – it’s like analyzing economic drivers by looking at a country’s average overall growth rather than partitioning the data by cities or neighborhoods: narrowing the scope reveals more detailed relationships among variables and exposes root causes.

After proving the device’s efficacy with human cells, Manalis' team moved on to microbes. They showed that dormant yeast cells are able to re-start metabolism almost immediately after being reintroduced into a nutritious medium, growing at a rate of about 20% per hour right off the bat. With E. coli cells, individual growth rates were tightly clustered, revealing an average doubling time of 19.4 minutes. Adding the antibiotic kanamycin led to a dramatic decline in growth rate, providing an opportunity to quantify the kinetics of drug effectiveness.

Seeing the world at the scale of an individual microbe is an extremely valuable contribution to experimental microbiology, and alluring possibilities await. To date, cantilever-based microbial analyses have all involved single-species cultures under uniform growth conditions. Examining mixed microbial populations representative of distinct microbiomes – and linking growth rate to identity – would provide unprecedented resolution on interspecies heterogeneity and broader ecosystem function. In the meantime, throughput and sensitivity of cantilever-based growth devices will undoubtedly increase, bringing microbial-scale view of the world into ever greater resolution.