New Genome Sheds Light on the Axolotl, a Master of Regeneration

Axolotls, a kind of salamander, are famous for their ability to regrow body parts. We're closer now to learning how. 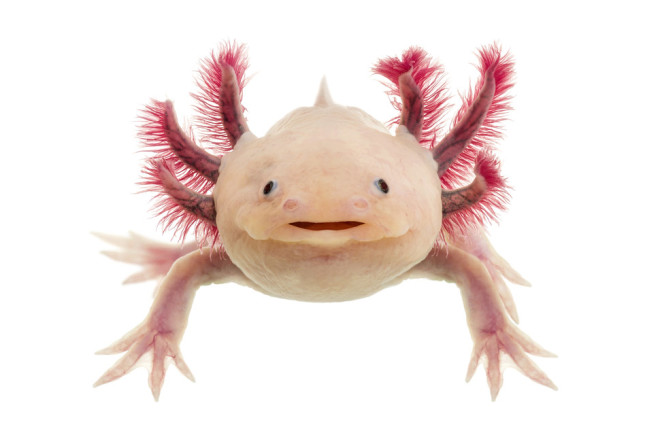 Wouldn’t it be sweet if you could regrow your arm after it’s been chopped off? Such is the life of a salamander, those adorable slimy four-legged amphibians that can regenerate limbs or even their spinal cords.

But salamanders are interesting for more reasons than their mad regeneration skillz. Especially when you consider the axolotl, a salamander that’s widely used as a model organism in biology. It’s got a ginormous genome that’s 32 billion base pairs long, which means every one of its cells contains 10 times more DNA than a human’s. And it has a unique way of maturing, or should we say, not maturing — adult axolotls become sexually mature without ditching their childhood traits like other animals do. In other words, the adults look like larvae. It’s like if adult frogs still looked and swam like tadpoles.

Anyway, scientists have been working on assembling the axolotl genome for years. And they’ve just had a major breakthrough. A team from the University of Kentucky just released the most complete axolotl genome to date, published in the journal Genome Research. They figured out a way to combine cutting-edge DNA sequencing with some old-school genetics techniques to form an updated map of the axolotl’s genes.

The new genome will open up some noteworthy opportunities for research. First, genome researchers hope to learn why the axolotl’s genome is so massive. There’s still a lot to learn about the evolution of genomes, and how they are shaped over time.

Another research angle is to compare axolotl genes to genomes from other species that are more distantly related. The University of Kentucky team already started down this path, comparing their new genome to ones from a frog, a chicken and a human. This will allow them to look for genes that are conserved across species — like genes that occur in both salamanders and humans. That way, they can study one species to learn about the other, and study both to learn about their evolutionary history.

Of course, a lot of people are stoked about salamander genes because of the insight they might lend to human regeneration. Jeramiah Smith, associate professor and lead author of the paper, says that’s a long way off. “But there are intermediate lessons we can learn in terms of how a salamander responds to injury,” he says.

“A salamander reprograms itself after an injury to basically go through development again in a controlled way that makes an arm instead of, say, making a tumor,” says Smith, vertebrate biologist at UK. “Smaller lessons about how cells work or how genomes are reprogrammed — those are things that I think have much stronger potential to be relevant lessons that can be applied to human health over the shorter term.”

Elly Tanaka, senior scientist at the Research Institute of Molecular Pathology in Vienna, studies axolotl regeneration. Her team, which wasn’t involved in this study, put out an earlier version of the axolotl genome a year ago. She says this new genome is “a really great advance.”

“The axolotl genome was (previously) in 200,000 pieces,” says Tanaka. But the new assembly effort put those pieces in order. “It allows us to know at some resolution which genes are nearby other genes along the chromosome.”

This is particularly important for evolutionary biologists who want to know how genomes evolved over time.

“It’s an exciting time,” says Tanaka. “There are all these fancy ways now to sequence DNA quickly, or to sequence large stretches of DNA. And that gives us access to understanding the DNA sequence of not only the axolotl but many other organisms that people didn’t used to work on that can regenerate or do other crazy interesting things.”

“I think there’s going to be a real rejuvenation of looking at nature and being able to study very fascinating things that were previously inaccessible,” she says.