New Fossil is the Oldest Bird Relative Ever Found

A tiny skull, dated to the era of the dinosaurs, is giving scientists a rare glimpse into how ancestors of modern birds evolved. 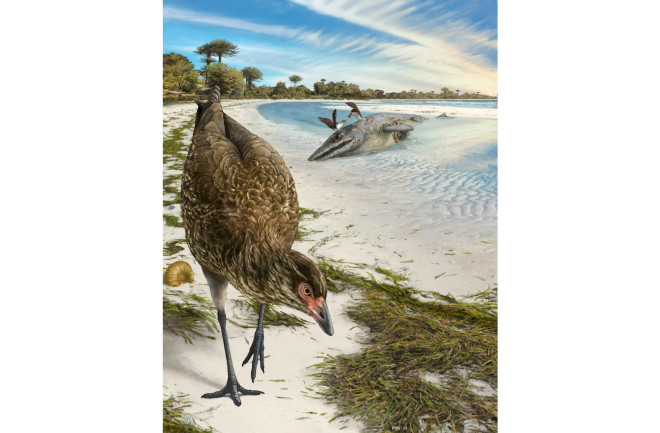 Daniel Field wasn’t expecting to see much when he put a broken rock in a CT scanner. The University of Cambridge paleontologist and his student, Juan Benito, were looking at a donation to the Natural History Museum of Maastricht, the Netherlands, which appeared to have some prehistoric bird leg bones sticking out of it.

CT scans are a matter of course in this kind of research, Field says. The technology uses X-rays to outline 3D versions of whatever is inside scanned objects — and, in paleontology, lets researchers see through stone. When the team scanned the rock, they hoped the data would reveal more information about the limb bones.

But when Field digitally swept aside a layer of rock, staring back at him and Benito from the screen was a remarkably complete, 3D bird skull. “We almost died,” Field says.

Since then, the team has learned that, at 66.7 million years old, the fossil is the oldest ancestor to the modern bird yet found, according their new report published in Nature. A few of its features support theories about how some ancient birds survived the mass extinction event that took out dinosaurs and most other life — which happened less than a million years after this avian specimen got trapped in sediment.

“We know so little about that interval, so it’s hard to know how [birds] survived that extinction event,” Field says. “This skull is super well-preserved and provides a lot of important information.”

It’s not clear how some organisms made it through the catastrophe that wiped out 80 percent of species on Earth 66 million years ago. Clearly, some ancestors of modern birds did, and paleontologists have some theories about what those ancient relatives must have been like in order to survive.

For instance, it’s possible they were better adapted to living on the ground than in trees. And they were probably on the smaller side, Field says: The smaller the bird, the fewer resources it would have needed. These birds probably had beaks of certain shapes that would have allowed them to tackle a huge range of foods, too.

“What’s so amazing about this new fossil is that everything we can we see about it is consistent with those hypothetical expectations,” Field says. Its leg bones indicate a life more comfortable on the ground, and estimates of the overall weight of the bird clock in at less than a pound — on par with modern small birds, Field says. The beak doesn’t seem tailored to a specific kind of diet, either; in fact, the entire skull looks like a mashup of a modern duck and chicken.

The fossil came from Belgium. An amateur geologist plucked it from the ground less than an hour’s drive from the museum, and Field thinks it could reinvigorate searches for ancient birds in the Northern Hemisphere.

Paleontologists have recovered prehistoric birds mostly from the Southern Hemisphere, leading some to believe that maybe that’s where this line of life first evolved, Field says. “The fact that it comes from Europe gives people in the Northern Hemisphere a lot of hope.”

Field is one of the hopeful. Though people have been digging for fossils in the site where this particular skull came from for over 200 years, he wants to find even older bird ancestors in Europe or in the Northern Hemisphere. “The only evidence we’ll find on how, when and where modern birds got going is in the fossil record,” he points out.