New, Extra-Vicious Python Species Is on the Loose in Florida 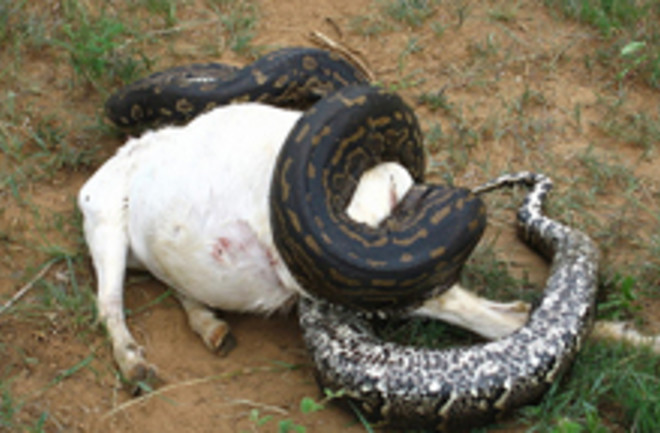 What's worse than having one gigantic-but-relatively-docile python species invading Florida? Finding out that an extremely aggressive python species is moving in as well, and learning that the two species could theoretically interbreed to create a hybrid monster. Florida wildlife officials have been concerned for some time about the 20-foot-long Burmese pythons that are thought to have been released by irresponsible pet owners and have established a thriving colony in Everglades National Park. But over the past year, four African rock pythons have also been sighted or captured in Miami-Dade county, giving biologists new cause for concern. Says herpetologist Kenneth Krysko:

"They are just mean, vicious snakes.... You couldn't get a worse python to become established. A Burmese python is just a docile snake. These things will lunge at you" [Miami Herald].

The two species have been known to interbreed in captivity, and that fact has scientists worried about a phenomenon known as "hybrid vigor," in which the hybrid offspring of two different species is stronger or in some other way genetically superior to its parents. Experts say that

the looming possibility of "hybrid vigor" between nonnative species means the Everglades are turning into a herpetologist's version of Dr. Frankenstein's lab. "It's a big petri dish," says Kevin Enge, an invasive species expert.... "You keep introducing things and, yeah, you don't know what's going to turn out" [ABC News].