New Dinosaur Species May Have Flown Like a Bat

Dinosaur Ambopteryx longibrachium was likely able to fly thanks to wings similar to bats today. 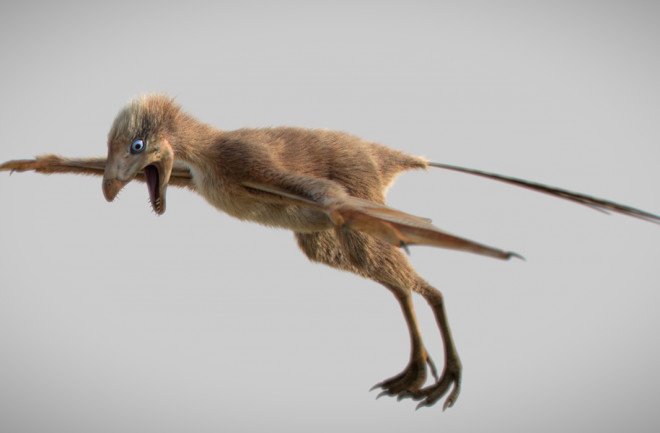 Powered flight among large living things has been around for hundreds of millions of years. Dinosaurs, and their relatives the pterosaurs, figured out how to take to the skies long before their avian descendants today did. Now, a new species of dinosaur is shedding some light on the evolutionary path that lofted reptiles skyward.

The fossil, discovered in Liaoning Province in China and named Ambopteryx longibrachium, is actually notable for the fact that it seems to be an altogether different experiment in flight than the one that led to birds today. Instead of the feathery wings that give birds lift, this dinosaur, dated to 163 million years ago, had a wing structure that looked much more like a bat’s.

Like birds, bats rely on elongated forearm and finger bones to support their wings. Bats, however, use a thin, fleshy membrane called a patagium to provide lift, in place of feathers. This adaptation has served bats well for millions of years, but it appears that their unique take on flight wasn’t necessarily new.

A. longibrachium, as well another related dinosaur, Yi qi, have arm bones that look quite similar to those of a bats, and their fossils show evidence for a patagium-like membrane. Additionally, both species had a special wrist bone, called a styliform element, that pointed backwards from the wrist and helped to support the wing membrane. Both species are part of the scansoriopterygids, a family of small, feathered theropod dinosaurs that likely lived in the trees.

The styliform element and patagium were unique adaptations among theropods, they say, shared only with Y. qi, and probably allowed the dinosaurs to glide from trees like flying squirrels. The find was published Wednesday in Nature.

Ambopteryx longibrachium, seen from the top in a digital reconstruction. (Credit: Min Wang, Institute of Vertebrate Paleontology and Paleoanthropology, Chinese Academy of Sciences)

Dinos in the Sky

Theropod dinosaurs, the large group that includes the scansoriopterygids as well as more notable species like Tyrannosaurus rex, also include the lineage that would one day become birds. Those avian dinosaurs evolved the ability to fly entirely separately, however. With this latest find, it’s likely that theropod dinosaurs found the path to flight on two separate occasions.

Another group of ancient fliers, the pterosaurs, had a similar wing structure, but that group of reptiles diverged long before A. longibrachium appeared, and aren’t even considered dinosaurs. This means that these kinds of bat-like wings evolved in A. longibrachium entirely on their own, an altogether separate experiment in flight.

The fossil also gives some indication of what A. longibrachium ate. Gastroliths, stones that helped grind food into digestible bits, were found along with the fossil, as well as what appear to be bones in the dinosaur’s stomach. The theropods were likely omnivores, the researchers say.