Some are bumpy. Some are smooth. Some are shaped like a garden spade. Researchers want to know why these amphibians’ noggins come in so many shapes. 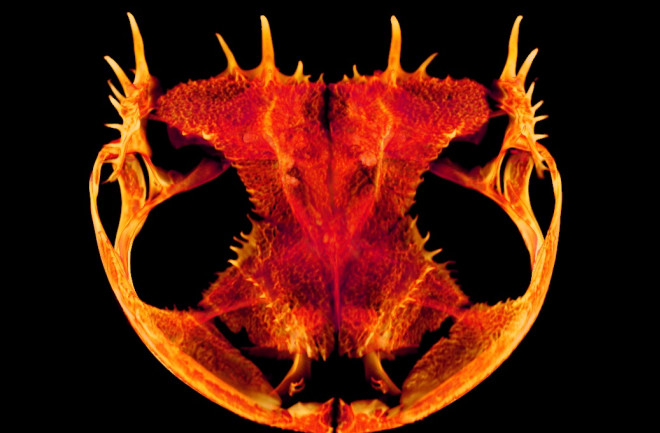 As slick as a frog might seem, spikes and lumps erupt from their skulls in places we can’t always see. “A few of them, if you could poke them on the head, you could feel it,” says David Blackburn, a herpetologist with the Florida Museum of Natural History at the University of Florida. Most of the features are a surprise, visible only when peering beyond the skin and soft tissue.

So that’s what Blackburn and his student, Daniel Paluh, did. The team compiled digital 3D images of the skulls of 158 frog species to visualize all their lumps, bumps and enormous jaws. It turns out that frogs probably developed their strange head gear to help them hunt, protect their homes or even deliver poison, the team concluded in their research, published in the Proceedings of the National Academy of Sciences.

Historically, researchers haven’t paid as much attention to frog evolution as they have other vertebrates, Blackburn says. Connecting some of their cranial nooks and crannies to their abilities might open up more investigations into where these strange amphibians came from. “These things we think about as so froggy — when did they evolve, and why did they evolve?” Blackburn asks. “We just don’t know.”

In the past 40 years, the number of known frog species has boomed, Blackburn says. Instead of studying museum specimens — which lose color over time, or don’t include tadpole phases that could mark two similar-looking species as distinct — researchers run genetic tests to differentiate the hopping amphibians. CT scans appeared as a kind of substitute, harmless surgery. These 3D X-rays map bone lying underneath the skin, showing everything researchers miss when studying the slick, bug-eyed heads from the outside.

When Blackburn and his team compared the CT scans with the genetic ancestry of these frogs, they found that some beliefs about these braincases don’t apply. Build-ups of bony growth don’t happen in mostly small frogs, like some research has hypothesized. Instead, those protuberances cropped up in all kinds of species, no matter how big the owners were.

The frog’s diet or behavior seemed a bigger determinant of head shape. For example, some had jaw joints that stretched so far behind their head, the hinge lined up with the middle of the frog’s back. These frogs all dined on other vertebrates and seemed to need massive mouths to conquer their meals. Others had jaw joints that were more proportional to their body size. “If you could imagine a diversity of people that had their jaw joints like that, it would look remarkably weird,” Blackburn says.

Some had aggressive spikes on top of their heads, something that might help deliver poison to predators. These species plug the entrance to burrows with their head as a blockade against pecking birds, and some have poisonous glands on top of their skull. The bony spikes lying just beneath the pocket of poison might help deliver the toxin to attacking birds, Blackburn says.

Because similar-looking skulls appeared amongst frogs that are not closely related, the team thinks these bony spikes and spurs evolved about 20 times along different lineages of frog. Ancient amphibian specimens show even more intense skull growths, Blackburn says, suggesting that today’s frogs are still tapping into ancestral growth patterns. “Somehow, these frogs are turning on some ancient developmental machinery in their DNA.”

More research will see how these theories hold. Researchers don’t know much about the biology and life cycle of many elusive frog species, and Blackburn would like to know more — for example, if many other frogs that barricade with their own heads also have poison glands and spikes on their skull.

As the discoveries continue, Blackburn can’t wait to see what else the CT scans reveal. “This is just the tip of the iceberg.”

When the study is made available online at PNAS.org, it will be posted here.

Check out their skulls, here:

Most frogs, including this gray tree frog, share a simplified skull with a reduced number and size of cranial elements.

Species that live in certain environments have specialized heads. The shovelnose frog of sub-Saharan Africa spends most of its life burrowing underground, eating ants and termites; their skull has a pointed snout and a frontward-shifted jaw.

Philippine flat-headed frogs have a long, flat skull shape that is adapted to living in fast-flowing streams.

Several frogs, including this horned tree frog, are known to hunt other vertebrates (including other amphibians, mammals, birds and reptiles) and have fortified skulls covered in intricate patterns of grooves, ridges and pits formed by extra layers of bone. This trait, called hyperossification, likely allows these species to more effectively eat larger, harder prey.

Some of these voracious predators, including this African bullfrog, have a formidable bite due to large, bony fangs on the lower jaw (highlighted in orange).

The shovel-headed tree frog also has a fortified skull covered in spikes that it uses as a plug when it backs into rock crevices or bromeliad axles to hide. This behavior, known as phragmosis, is thought to protect these frogs against predators.

Three species of hyperossified frog, including Bruno’s casque-headed frog, were recently discovered to be venomous, with enlarged poison glands that are associated with the spines of the skull. When a predator rams the head of one these frogs, specialized spikes pierce through the glands just under the skin as a defense.

The spiny-headed tree frog is not known to be phragmotic or venomous, but it has very large spikes covering its head to deter predators.

Some species, including the eastern spadefoot, have hyperossified skulls but are not known to prey on vertebrates or have specialized defense mechanisms. In these species, the function of the trait may be linked to conserving water in arid environments, but further research is needed to test this.