Neurons in a pigeon’s brain respond to magnetic fields 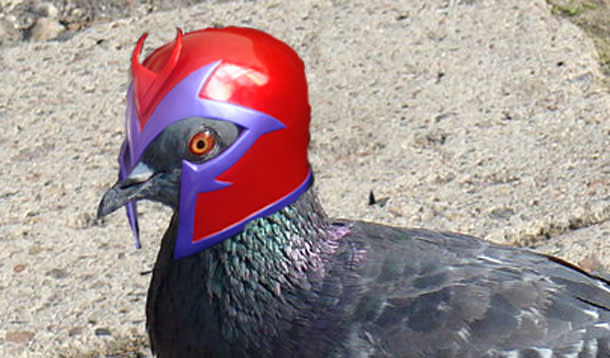 In retrospect, the helmet should have been a clue...

Of all the super-senses that animals possess, the ability to sense the Earth’s magnetic field must be the most puzzling. We’ve known that birds can do it since the 1960s, but every new attempt to understand this ability – known as magnetoreception

from the Baylor College of Medicine have found neurons in a pigeon’s brain that encode the properties of a magnetic field. They buzz in different ways depending on how strong the field is, and which direction it’s pointing in. This is a big step. Scientists have identified parts of the brain that are important for magnetoreception, but no one has managed to nail down the actual neurons responsible for the sense. Miriam Liedvogel

, who studies magnetic senses, calls it “a milestone in the field”. It’s a key puzzle piece that has been unavailable for a very long time. But Wu and Dickman’s discovery doesn’t solve the magnetoreception puzzle. If anything, it makes it more complex. Until recently, scientists thought that birds had two separate magnetic detectors – one in the eye and one in the beak. And it looks like the new magnetic neurons don’t hook up to either of these. “We can’t say where the signals come from,” says Dickman. If these neurons are responding to magnetic fields, which part of the bird is feeding them their information? Is there a third sensor? Finding the neurons Wu and Dickman found their neurons by placing pigeons in a set of coils that can produce bespoke magnetic fields. First, they programmed the coils to cancel out the Earth’s magnetic field around the pigeon’s head. Next, they created fields of their own, and gradually altered their strength and direction. As the fields shifted, Wu and Dickman recorded the activity of individual neurons in the pigeons’ vestibular brainstem – an area that connects the brain and spine, and is involved in balance. Based on earlier experiments

, they knew that neurons in this area fire when pigeons are using their magnetic sense. The duo found 53 neurons that fire at different strengths depending on how strong the magnetic fields around them are. They’re most sensitive to a range of intensity that’s naturally produced by the Earth’s actual magnetic field. They also fire differently depending on where the field is pointing along the horizon (the azimuth), where it points above or below the horizon (the elevation), and the direction it points in (the polarity). The last bit was a surprise. Earlier experiments from the 1970s showed that birds aren’t sensitive to the polarity of the Earth’s magnetic field. But Wu and Dickman’s experiments suggest otherwise. As “north” moves around the bird’s head, the neurons fire at their fullest in one direction, and at their weakest in the opposite one. Now, the duo wants to understand how birds use this information to navigate. It’s easy to take a guess. Sensing the azimuth tells the bird where to head, just like a compass. Sensing the elevation provides information about latitude. Sensing intensity could tell the bird where exactly it is, because the strength of the Earth’s magnetic field varies from place to place, often at a very fine scale. This is all plausible in theory, but how it works in practice is another matter. And there is an even bigger mystery… Where’s the sensor? If these neurons are processing magnetic fields, what’s feeding them with information? Where’s the compass? We know that birds have a compass in their eyes, which relies on a protein called cryptochrome

and a dash of quantum physics. When the protein is struck by blue light, it shunts one of its electrons to a partner molecule called FAD. Electrons normally waltz in pairs, and molecules with lone electrons – as cryptochrome and FAD now do – are called radicals. Electrons have a property called ‘spin’. The solo electrons of cryptochrome and FAD are linked, so that they either spin together or in opposite directions. These states have different chemical properties, and the radical pair can flip between them. Here’s where the Earth’s magnetic field comes in – it can influence these flips. In doing so, it can affect the outcome or the speed of the chemical reactions involving the radical pair. This explains how living cells can be sensitive to something as weak as the Earth’s magnetic field. It also explains why birds need to see for their internal compasses to work. A robin in a shuttered cage will try to escape in a fixed direction, even if it can’t see any landmarks. If you cover the robin’s right eye, it loses its bearings. (Read my feature from New Scientist for the story of the cryptochrome discovery.

) Cryptochrome is found in the retina, and it seems to connect to a part of the brain called Cluster N. To this date, we still don’t know how information about magnetic fields gets from the eye to the brain, or how it’s processed there. Thorsten Ritz, who helped to uncover the role of cryptochrome, once told me

: “We need to find that magnetic neuron.” Wu and Dickman’s study might look like it provides the answer, but it doesn’t. The brainstem neurons they identified aren’t anywhere near Cluster N, and they responded to the polarity of magnetic fields. “The cryptochrome idea can’t give you polarity information,” says Dickman. The duo thinks that the properties of their magnetic neurons are more consistent with a sensor that uses magnetite – a magnetic iron mineral that could act as tiny compass needles. Until recently, scientists thought that birds have such as sensor in their beaks. Neurons in their bills supposedly contained magnetite crystals, and send information to the brain via the trigeminal nerve. Cutting the nerve robs pigeons of their ability to detect strong magnetic fields. Everything added up. But a study published earlier this

month blew that idea apart. Christoph Treiber showed that the iron deposits in the beak are actually are found in immune cells called macrophages, not neurons, and they don’t contain magnetite. Instead, these cells are simply recycling iron from red blood cells, rather than using it to sense magnetic fields. There might still be a magnetic sensor in the beak (how else could you explain the effects of cutting the trigeminal nerve?) but it’ll be a very different to the one that people had assumed. So if the magnetic neurons in the brainstem aren’t getting their signals from the eye or the beak, what’s the alternative? Dickman thinks that the answer lies in the inner ear, and that’s where he is currently looking. “Maybe there are two or even three receptors that come together in the brain to work together,” he says. For example, as you move about, your brain combines what you see with your eyes with information form the inner ear. Perhaps the magnetic sense works in the same way. Reference: Wu & Dickman. 2012. Neural Correlates of a Magnetic Sense. Science http://dx.doi.org/10.1126/science.1216567