In 2021, the country announced its rhino population had jumped by over 16 percent from 2015. But struggles like the COVID-19 pandemic still risk both human and rhino health. 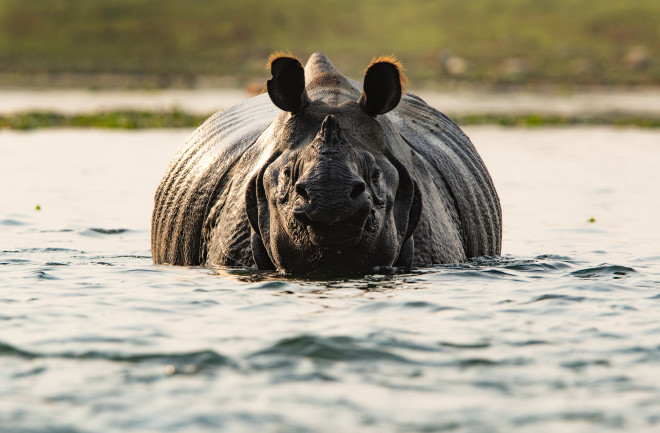 The census takers set out in the spring of 2021 not in cars, but on a fleet of elephants. More than 300 people, including conservation experts and forestry officials, swept Nepal’s national parks in search of rhinos.

Two months later, the team announced that Nepal’s rhino population had risen to 752, a 16.6 percent jump from 2015. After decades of work, this progress demonstrates how local and global efforts can save an animal species from the brink of extinction.

One-horned rhinos once roamed the Indus and Ganges river plains in northern and eastern India, southern Nepal, parts of Pakistan and Bhutan, and most of Bangladesh. But hunting and habitat destruction culled the animals to small patches of their former range, mostly in India and Nepal.

By the 1970s, Nepal had fewer than 100 rhinos left. Ramped-up conservation efforts and the expansion of protected areas followed, yet stalled during a civil war that spanned 1996 to 2006. “The social and political unrest periods were not good for conservation,” says Naresh Subedi, a biologist and program manager at Nepal’s National Trust for Nature Conservation. “When there are lapses in security, the poachers take advantage of that.”

These fluctuations in Nepal’s rhino population prove that when people struggle, animals do too. “The population is directly affected [by] the political condition of the country,” says Subedi. The loss of tourism and economic opportunities associated with COVID-19 encouraged poaching, and the rhino reproduction rate has lagged slightly since 2015. Despite the recent win, the animals still require close monitoring and anti-poaching efforts: At the height of the pandemic, poaching killed five Nepalese rhinos. “It may escalate if timely actions are not strengthened,” says Subedi.