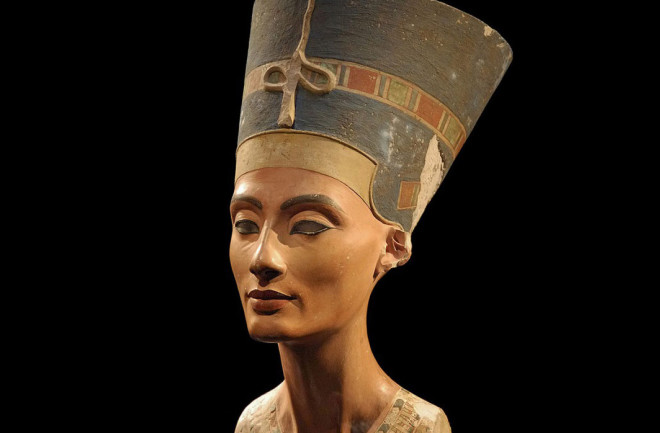 Back in June of 2015, the archaeological world was electrified by a paper that suggested hidden rooms lay behind a wall in King Tutankhamen’s’s tomb.

Nick Reeves, the author of the paper, and a respected Egyptologist at Arizona State University, suggested that, based on detailed photographic scans of the tomb, a doorway to an unopened room was hiding in plain sight, covered up by paintings on the wall. In his paper, he cites both visual evidence — the presence of telltale lines in the artwork — and contextual evidence, such as a right turn in the L-shaped tomb, suggesting the burial is part of a much larger excavation meant to house a female pharaoh.

The latest update to the story came several weeks ago, when an analysis of radar scans by Japanese experts that there was indeed something behind the walls, and offered evidence of metal and organic material. Another round of scans took place Friday, aimed at providing more concrete evidence of possible chambers. The results of those, and upcoming scans, are expected to be announced early this month.

The Tomb of Nefertiti?

The most exciting part of Reeves’ paper was the suggestion that the tomb of Nefertiti lay beyond the wall. Believed by some to be the mother of Tutankhamen, Nefertiti was a wife of the pharaoh Akhenaten, and may have gone on to become one of the only female Egyptian rulers, although perhaps under a different name. Definitively discovering her final resting place would be a scientific coup, and would provide physical evidence of one Egypt’s most important figures.

Except, she may have already been discovered. Or, she may lie in a completely different tomb, yet to be found. Or, she may not actually be Tutankhamen’s mother. Theories about Nefertiti — who she was, what her role was, where she was buried, abound, underlain by competing hypotheses based on data that has been repeatedly questioned. Ancient Egypt, the 18th Dynasty in particular, has captured our imaginations for well over a century, making it the subject of intense scrutiny and even more intense debate.

Much of the disagreement over Nefertiti’s identity concerns a mummy called the “younger lady.” Discovered in 1898 in a side chamber of the tomb of Amenhotep II, she was interred with two other unidentified mummies and was found with a broken-off forearm lying across her chest — obviously not hers, as she still had all of her limbs. There is evidence to suggest that the younger lady is indeed Nefertiti, based on how she was buried. It has also been claimed that she was Kiya, another wife of Akhenaten.

Many who believe the younger lady was not Nefertiti cite an analysis of her DNA performed in 2010, along with the DNA of Tutankhamen and other royal mummies. This study suggests that the younger lady is actually Tut’s mother, and backs up the claim that Akhenaten was his father. The results of the analysis, published in The Journal of the American Medical Association have been criticized, not only because of the conclusions drawn by the authors, but also on the purported ability to sequence 3,000-year-old DNA.

“As far as the actual science goes, it’s highly problematic,” says Stephen Buckley, an expert on archaeological chemistry, and a research fellow at the University of York. “What they said they achieved, the U.S. military can’t do. They can’t do with Vietnam vets that are only 30, 40, 50 years old. They can’t recover DNA from them and yet we’re supposed to believe that these scientists recovered DNA from these Egyptian mummies.”

In an editorial published later that year in JAMA, several researchers also offered similar criticisms of the research. While he criticized the DNA study, Buckley still believes that the younger lady was Nefertiti, although his conclusions are based on other evidence.

“Everyone has assumed that everything we know about these royal mummies is purely attached to what the DNA is telling us, which is absolutely nonsense,” says Buckley. “The royal mummy scans tell us a very great deal without the need for DNA. And, actually, you can tell a great deal about the relationships and who they were without DNA…there is an over reliance on the idea that DNA is this magic bullet, and it’s all-knowing and all seeing.”

Another wrinkle in the debate comes from a discussion over who Tutankhamen’s mother was. While some claim Nefertiti as a probable candidate, others contend that Kiya most likely gave birth to the child king. Some scholars on both sides support the notion that the younger woman was Nefertiti, others oppose it in favor of Kiya.

Joann Fletcher, who has worked closely with Buckley, first forwarded the theory that the younger lady was Nefertiti in 2003, a bold claim that saw her banned from Egyptian archeological sites by the then head of the Supreme Council of Antiquities, Zahi Hawass. She based her claim on the famous “Berlin Bust,” a statue of Nefertiti made by the sculptor Thutmose, the striking beauty of which is largely responsible for Nefertiti’s fame. Fletcher conducted detailed craniofacial measurements of both the younger lady and the bust, and concluded that they were one and the same.

As for Hawass, he claims to have found Nefertiti himself in the Valley of the Queens, in a burial labeled only as Tomb 21. According to The Telegraph, he has removed the bodies in order to conduct DNA testing on them. He contends that the younger lady is Kiya, as well as being Tutankhamen’s mother, and has fervently opposed any further scans or excavations of Tut’s tomb.

What Are We Fighting For?

The furor over whether Nefertiti is buried behind the wall may ultimately be pointless. Despite previous claims that secret chambers were all but a certainty, there has yet to emerge any concrete evidence of such rooms. The validity of the scans themselves was recently called into question as well by independent radar experts, who criticize the fact that they were not peer reviewed.

“The radar results are suggestive, but are by no means definitive, especially as there seems to have been no peer review of the raw data,” says Aidan Dodson, a research fellow in the Department of Archaeology and Anthropology at the University of Bristol, in an email conversation with Discover. “There indeed does seem that there may be cavities, but I would remain dubious as to whether ‘organics’ and ‘metals’ have indeed been detected. Other royal tombs have a total of four store chambers, so an additional two would seem logical, but it is still possible that they could be false-echoes from faults in the rock or unfinished cuttings from a projected enlargement of the burial chamber.”

Buckley agreed, stating: “The valley of the kings is a very interesting place, its geology is quite complex. So natural fissures are there anyway, so spaces aren’t so surprising…there’s even the possibility that there could be a chamber that relates to another tomb — there are still undiscovered tombs in the Valley of the Kings.”

Dodson was also skeptical of the claim that Nefertiti could be found behind the wall.

“The evidence for a burial of Nefertiti is extremely weak, verging on the non-existent,” he said. “[Regarding] the claim that ‘female tombs turn right’ — the sample size is minute and the ownership of the subject tombs disputed. Also, there is good evidence that Nefertiti’s mummy is one found in 1898 and now in the Egyptian Museum.”

Reservations aside, Buckley said that he was nevertheless excited about the news, and not entirely ready to dismiss the possibility of hidden rooms. According to him, the practice of covering hidden doors with paintings is not without precedent — a similar tactic was used in the tomb of Amenhotep III, Tut’s grandfather, to conceal a secret chamber.