Neanderthals Were Just As Violent As Early Humans 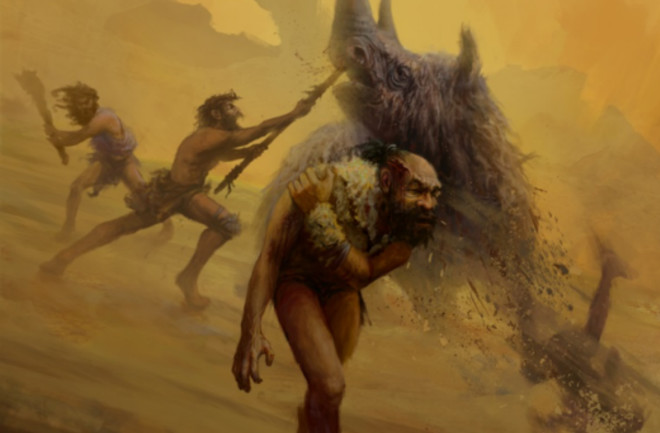 Is it time to put the stereotype of the violent and brutish Neanderthal to rest? New research paints a different picture of the ancient hominin — one that looks similar to Homo sapiens.

Researchers previously thought that Neanderthal lives were far more nasty, brutish and short than ancient H. sapiens, based mainly on studies looking at levels of injury among both groups. Now, however, in a much more comprehensive look, a team of University of Tübingen (UIT) researchers found that both Neanderthals and H. sapiens living in the Ice Age sustained similar levels of head trauma.

The new research, published this week in Nature, may help dispel some Neanderthal stereotypes that still persist in popular culture and the science community. Previous studies of Neanderthal trauma has inferred that inferior, close-range hunting methods and a violent social culture made the species more prone to injury. Instead, the study suggests that Ice Age Eurasia probably was a difficult and harsh environment for all.

“Our results suggest that Neanderthal lifestyles were not more dangerous than those of our ancestors, early modern Europeans,” said lead researcher Katerina Harvati, a paleoanthropologist.

Previous studies of Neanderthal trauma have been largely anecdotal and based on case studies of individual Neanderthal skeletons. Often, Neanderthals’ injuries were compared to modern human populations instead of Ice Age humans. UIT’s study, however, is the first known large-scale analysis comparing fossil records of Neanderthal injuries to those belonging to early humans.

The team’s discoveries came from a database they created that catalogued 295 Neanderthal bones and 541 human bones originating from Eurasia between 80,000 and 20,000 years ago. They looked for statistically significant differences based on skull trauma, sex, age at death, the level of preservation of the remains and the location where they were found. Regardless of the statistical model they used, the researchers didn’t find higher rates of head injury among Neanderthals compared to H. sapiens.

This study isn’t the final word on Neanderthal trauma. The team hopes to expand their studies to the full skeleton to learn more about the behaviors, activities and social norms of these Ice Age inhabitants. But for now, it appears as though we may have gotten Neanderthals wrong.

“The commonly cited Neanderthal behaviors leading to high injury levels, such as violent behavior and inferior hunting capabilities, must be reconsidered,” Harvati said.