Neanderthals Really Were All Fired Up 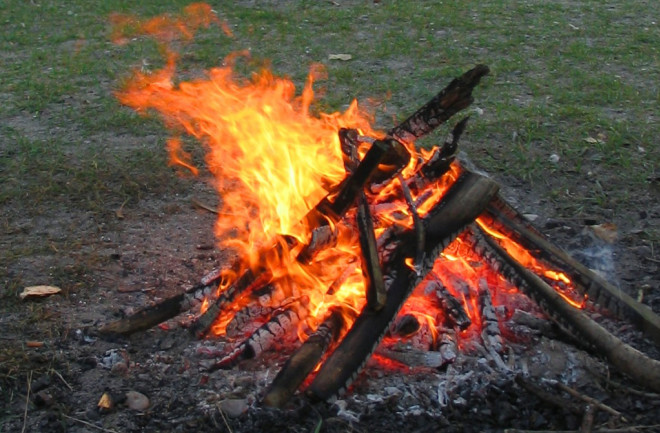 Production of fire was long thought to be a skill exclusive to Homo sapiens, but new research suggests Neanderthals could light it up just as well. (Credit: Wikimedia Commons) Fire at will! Researchers present evidence that Neanderthals were just as capable of producing fire as early Homo sapiens were, sending another long-held notion of our species' exceptionalism up in smoke. I'm not just fanning the flames here: The question of whether our closest evolutionary kin used fire the same way our ancestors did has been a controversial one for decades, and its debate mirrors broader trends in paleoanthropology. Members of the genus Homo appear to have been using fire for at least a million years — long before either Homo sapiens or Neanderthals had evolved. But researchers have debated whether earlier hominins were capable of producing fire, or simply collected it from natural occurrences, such as a wildfire stirred up by a lightning strike. The act of producing fire, after all, requires considerable cognitive skills — or at least it did, back in the days before you could flick a Bic. To start an old-school fire, one needs to gather appropriate materials, create sparks that will get a nice tinder-smolder going, layer additional materials and introduce more oxygen at judicious times and in the right amounts. Before the Iron Age, when it became possible to strike steel against flint and produce sparks, would-be firestarters were, well, between a rock and a hard place. No, really. There's ample evidence that Neolithic hunter-gatherer groups and later cultures without access to steel would strike flint against pyrite or the closely related mineral marcasite. Fire, Fire! The archaeological record is full of evidence of fires, from hearths to charred bones and heat-scarred rocks (heating rocks was, in fact, a key part of stone tool-making). Researchers have had a difficult time finding the actual tools used for fire production in the Paleolithic, however, which covers most of the last two million or so years. Blame "pyrite decay" for at least some of the trouble: the mineral corrodes upon exposure to humid air, so much of the material used to produce Stone Age campfires has likely disintegrated. There have been enough distinctive flint tools recovered from early Homo sapiens sites, however, to determine that our species was producing fire tens of thousands of years ago. But no similar implements were found at Neanderthal sites, leading many researchers to believe that the Neanderthals did not produce fire but merely collected it from natural occurrences. Interwoven in this belief was the idea that Neanderthals lacked the brainpower to produce fire. Keep Your Powder Dry As more details about our closest evolutionary kin emerge, however, researchers are finding that Neanderthals may have been very capable cognitively of making fire. What's more, they may have been using some savvier techniques. Collections of manganese oxide have been found at many Neanderthal sites. Traditionally, the material was thought to have been used as a black pigment for body decoration and other symbolic uses, similar to the way Homo sapiens have used ochre for hundreds of thousands of years. A 2016 study, however, suggested that Neanderthals added the powdered manganese to their tinder to make it more easily combustible because yes, they were producing fire on their own, no lightning strikes needed, thanks very much. Hot stuff, indeed. Now, researchers have more evidence Neanderthals were fire-makers of the first order. Striking It Rich Presenting what they call "the first direct artefactual evidence for regular, systematic fire production by Neanderthals," the team analyzed microwear patterns on dozens of stone tools from Neanderthal sites in Europe that were about 50,000 years old. They focused their effort on bifaces, also called hand axes. The Swiss Army knives of their day, bifaces were often used for a range of purposes, from butchering meat to scraping hide. Bifaces were valuable tools and often carried from one place to another. (In contrast, it seems many of the firestarter tools used by our species may have been of an expedient nature, used once or twice and discarded.) The sharpened edges of the tools showed the expected wear, and often signs of re-sharpening. But on most of the bifaces studied, a consistent pattern of microwear emerged on the flat faces as well. The striations were not random, and the team was able to rule out natural processes. C-shaped marks in particular were consistent with percussive strikes.

Multiple views of one of the bifaces analyzed in the study reveal patterns of microwear consistent with percussive striking on the flat surface of the tool. The arrow indicates the direction of the strikes. On Side A, an area of percussive C-shaped marks are outlined in white. The star shape on Side B, however, shows the approximate area of a different kind of percussive mark, more likely due to knapping, typical of stone tools used and re-used for various purposes. (Credit Sorensen et al/Scientific Reports) The researchers then conducted numerous experiments using replicas of the bifaces in different ways, from grinding manganese and ochre to striking pyrite. They discovered that the patterns most similar to those on the Neanderthal tools — including the C-shaped marks — were made by striking the flat hand axe surfaces against a hard mineral, as one would to kick up some sparks and start a fire. To be clear, no pyrite residue was found on the Neanderthal tools in the study when the team used an optical microscope. Based on that initial finding, they did not conduct potentially destructive chemical tests for residues. However, in their conclusions, the authors note they're investigating the possibility of using RAMAN spectroscopy, a non-destructive way to build a chemical profile of residue, and other methods to look for pyrite on the artifacts in the future. We Didn't Start The Fire The finding, while intriguing, likely won't convince everyone that Neanderthals produced fire at will. But, like a separate recent study on Neanderthal hunting techniques, it does suggest they were capable of more complex cognition and behavior than long thought. Perhaps most tantalizing, the findings open up a new avenue of inquiry even deeper into our evolutionary past. The Neanderthal bifaces are similar to those used by earlier members of our genus, such as Homo erectus. If Neanderthals used these tools to start fires, it's very possible their predecessors — and ours as well — did the same, making our species' long-held exceptionalism, well, a little less exceptional. The study appears today in Scientific Reports.