NASA Announces Slate of Discovery Mission Finalists, With One Thing In Common

The four potential targets for NASA's next Discovery Mission have been announced and they're all worlds with lots of volcanism. 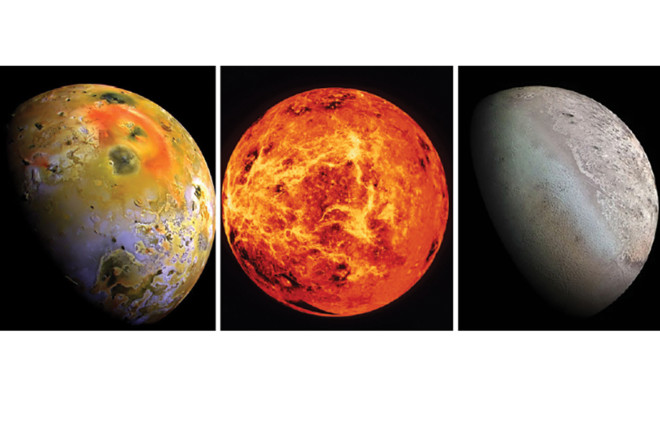 The three potential destinations of NASA's next Discovery Mission, from left to right: Io, Venus and Triton. (Credit: NASA)

Every few years, NASA announces its next wave of solar system exploration. This year, the four finalists for the space agency's Discovery Missions were announced and they all shared one conspicuous feature: volcanoes.

Potential missions to Venus, Io and Triton are on the table and two of the four proposed missions will be picked to continue development. This new batch of potential missions each receive three million dollars to construct a full mission plan to prove their value and feasibility.

The Discovery Missions are not the big flagship missions like Galileo or New Horizons. Instead, they're more targeted missions with smaller budgets that can nevertheless produce amazing results. Alumni of the Discovery Mission program include Mercury's MESSENGER, the comet hunter Deep Impact and Dawn's visits to Vesta and Ceres.

The four finalists propose to visit three potential worlds, all of which have not been closely studied by an American mission for decades. Two would travel to Earth's sister planet, Venus.

DAVINCI+ (Deep Atmosphere Venus Investigation of Noble gases, Chemistry, and Imaging Plus) would examine the atmosphere of the planet while VERITAS (Venus Emissivity, Radio Science, InSAR, Topography, and Spectroscopy) would be focused on the surface geology.

Both missions' goal is to understand why Venus' history diverged so dramatically from Earth's -- and volcanism is a key to that question. The atmosphere of Venus is choked with carbon dioxide, likely emitted by volcanoes, some of which might still be going on today.

DAVINCI+ would actually land on the planet, a formidable task for any mission as the surface temperature is over 500 degrees Celsius and pressures are over 75 times that of Earth. VERITAS, by contrast, would orbit the planet and map the entire surface in remarkable detail (and 3D!)

Currently, Japan's Akatsuki mission is in orbit around Venus, but the last American mission to the planet was Magellan in the early 1990s. The last lander on Venus was the Soviet Union's Venera 14 in 1981. Either of these proposed Discovery Missions would bring Venus back into the forefront of planetary exploration.

The other two finalists would head to the outer solar system. IVO (Io Volcano Observer) would head to the most volcanically active body in the solar system: Jupiter's moon Io. It would search for potential sources of the copious lava that erupts from massive calderas on the tiny moon's surface. Io was explored by both Voyager missions and Galileo, but never it's never had a dedicated mission.

Finally, TRIDENT would explore one of the strangest moons in the solar system, Neptune's Triton. Not only does it orbit Neptune in the opposite direction of almost every other moon, but it also is home to cryovolcanism — ice erupting from its interior. Triton may be a captured Kuiper Belt object (like Pluto) and as New Horizons discovered, these icy dwarf planets can be highly geologically active. Neptune's moons haven't been visited since Voyager 2's flyby in 1989.

Any of these Discovery Missions would explore worlds that have been neglected for decades. Combine that with missions like Dragonfly to Titan and Osiris-REX to asteroid Bennu, and we'll soon be visiting some of the most unique objects in our solar system.