Narwhals Can Dive 6,000 Feet Below Arctic Waters, But When Do They Do It?

Scientists are applying an area of mechanics and mathematics called “chaos theory” to describe the diving behavior of narwhals. 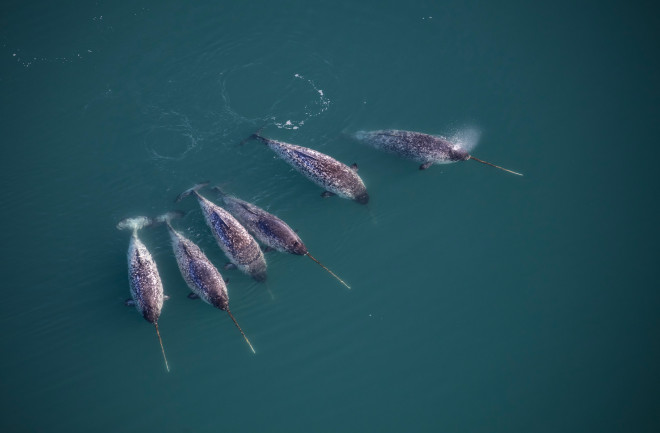 Narwhals, also known as Monodon monoceros, are small whales that swim through the Arctic Ocean. They’re famous for their singular spiraled tusks that protrude as far as 10 feet from their faces. But one other oddity of the species is that it dives and surfaces within the water without any apparent rhyme or reason.

A new paper published in PLOS Computational Biology makes sense of the narwhal’s seemingly random swimming. Putting an area of mechanics and mathematics called "chaos theory" to work, this paper states that specific diurnal and seasonal patterns do direct narwhals’ diving and surfacing behaviors, despite all appearances to the contrary.

Narwhals are one of the deepest-diving whales in the world. They can descend around 6,000 feet below the surface of the water. But while narwhals’ diving abilities are widely recorded, the whales implement these skills in ways that scientists still struggle to understand. In other words, specialists simply cannot anticipate when these animals will dive, nor to what depths they will descend when they do take a plunge.

"There is a lack of adequate methods to analyze records of irregular behavior," says Evgeny Podolskiy, a study author and geophysicist at Hokkaido University, according to a press release.

That is, until now. Podolskiy and a colleague devised a new way to study narwhal swimming, one which discloses previously unidentified patterns of diving and surfacing when applied to individual narwhals in the wild.

To identify the daily and seasonal patterns of wild narwhal swimming, the team turned to "chaos theory," an area of scientific study that inspects irregularities and identifies patterns within those irregularities that would be otherwise difficult to detect without complex mathematics.

Applying the tools of this theory to the swimming-depth data from a single tagged narwhal over a period of around 80 days, the team identified new patterns of diurnal activity. Specifically, they found that the tagged individual tended to stay at the surface of the water around midday but descended deeply whenever it did decide to dive down. Alternatively, the animal tended to dive for prolonged periods at reduced depths during the night, potentially due to increased predation activities around that time.

In addition to these daily patterns, the analysis also revealed that the narwhal’s diving and surfacing shifted with the seasons. In fact, the narwhal avoided the increasingly frozen surface of the water when the weather cooled, resulting in more intense diving during the icy season.

"Our approach is relatively simple to implement and can map and label long term data, identifying differences between the behavior of individual animals and different species, and also detecting perturbations in behavior caused by changing influences," the two study authors say, according to a press release.

Ultimately, the researchers conclude that their method could contribute to the future conservation of the narwhal, as well as other arctic animals, which struggle to adapt to shifts in sea ice and other forms of climate change.