They live unexpectedly long, don't get cancer and can't feel pain. Oh, and they have a queen. 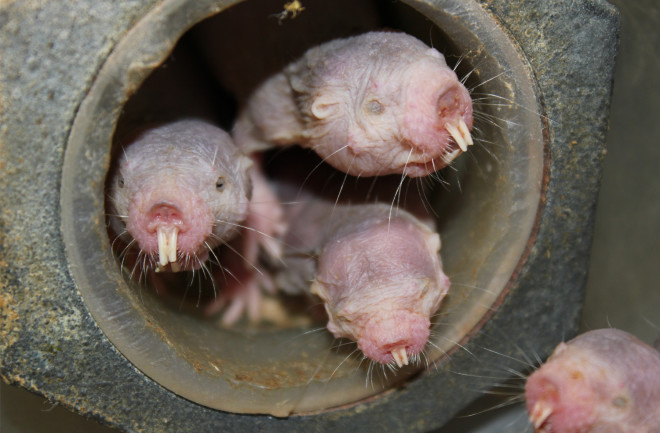 In 2017, a study from University of Illinois at Chicago found that naked mole rats could survive up to 18 minutes without oxygen. (Credit: Thomas Park/UIC)

Beady eyes, protruding fangs, wrinkly skin — the naked mole rat looks like it may have dropped down to Earth from another planet. In reality, the small mammals are very much at home on our planet, spending much of their lives underground in tight-knit societies centered around a dominant queen.

Odd appearance aside, the naked mole rat is a marvel of strange abilities and adaptations. For starters, they're cold-blooded mammals — one of few in existence. That trait, like many others they possess, is probably due to their subterranean lifestyle. Life is just different underground.

But it gets weirder. Naked mole rats live in societies with insect-like social structures, have abnormally long life spans and eat each other's poop. Oh, and they can't really feel pain.

The rodents, native to East Africa, live in dense warrens honeycombed through the earth, where oxygen levels are low. So researchers from the University of Illinois at Chicago hypothesized in a 2017 study that naked mole rats wouldn’t need as much oxygen as humans to survive. And it turns out they need far, far less — the researchers found that the rodents could survive for up to 18 minutes without any oxygen at all, and for hours at very low levels of oxygen.

When researchers placed naked mole rats into a zero-oxygen chamber, their heart rates dropped drastically and they laid perfectly still, appearing almost dead. But once oxygen was restored the rodents became animated once again, with no lingering ill effects.

How do they do it? Normally, the rodents need oxygen to activate glucose reserves that store energy, just like humans do. But when faced with oxygen-sparse conditions, researchers found that naked mole rats can rely on a second system: one that taps into fructose, another kind of sugar. Though they can’t operate at their normal metabolic rates with little oxygen, the rodents can survive conditions that would normally kill other small mammals and humans alike.

Naked mole rats also have another superpower: they can't feel pain on their skin. The rodents don't respond to heat or acid burns, and lose two-thirds of their pain receptors by the time they are adults.

They also rarely, if ever, get cancer. Unlike in humans, naked mole rats' cells stop growing before they can form tumors. Researchers observed in a 2009 study that their cells cease dividing when a certain density threshold is crossed — a mechanism called early contact inhibition that prevents tumors from ever forming.

This could be part of the reason why naked mole rats outlive their rodent counterparts by several decades. Where mice and guinea pigs live anywhere from two to eight years, naked mole rats can survive for 30 years or longer. But despite their death-defying adaptations, the species also faces a few challenges due to their subterranean lifestyle.

Chief among the naked mole rats' problems is inbreeding. This leads to, among other things, an increased susceptibility to disease.

In 2007 researchers tested naked mole rats' ability to fight off a lethal coronavirus, and found their genetic similarities led to extremely high mortality rates. In that study, the inbred naked mole rats were over 300 percent more likely to die than outbred ones.

And when it comes to breeding, the naked mole rats' sperm contains all kinds of abnormalities that stunt its ability to fertilize eggs. The males' swimmers are abnormally shaped, with squished heads and odd bulbs sometimes growing off of them. Plus, they swim much slower than other mammalian sperm, due to a lack of the mitochondrial rings that typically circle sperm tails. Researchers estimate that only one of every 15 of a naked mole rat's sperm can actually swim.

The spermatic issues they face could be due to the unique way a naked mole rat colony is organized. Most males never breed, which could explain the stunted sperm. And it is in their social organization that we find some of the most peculiar naked mole rat behavior of all.

Naked mole rat society bears more similarities in many ways to insects than to their fellow mammals. The rodents live in tightly packed burrows, much like ants or termites. Their society is hierarchical, with the majority of naked mole rats functioning as workers. These members do the bulk of the day-to-day work of the colony, foraging for roots and tubers, fighting off predators and caring for pups.

Like bees, naked mole rat colonies are ruled by a single, domineering queen who produces all the offspring. She breeds only with a select male, producing a new litter every 80 days.

Females aren't born into queendom, though — they have to fight their way to the top. This often results in vicious battles between females as they vie for the crown.

And that lucky queen and her mate tend to live longer than the rest of the pack. A 2018 study found that sex seems to slow aging in naked mole rats. But even if they aren't procreating, the rodents seem to remain fertile throughout their entire lives. Females show no sign of menopause, meaning that an older queen could still birth a litter of pups as she nears the end of her life.

Female worker naked mole rats are tasked with caring for the queen’s offspring. And the queen has a peculiar method of passing along the message that she's about to deliver a new litter: she sends hormonal messages through her poop.

Though naked mole rats have a good sense of smell, their noses can’t pick up on pregnancy hormones that signal a new litter is near. So, the workers eat the queen's poop instead.

Then, they added the pregnancy hormone progesterone to a non-pregnant queen’s poop and fed it to the workers. The naked mole rats were still attentive to the pup's cries — signaling to researchers that they could pick up on hormonal fluctuations by feasting on feces.

Eating poop not only passes along hormonal messages, it also helps naked mole rats digest their food. The rodents don’t have powerful stomach enzymes to break down the tough roots and tubers they eat — so a few extra passes through their digestive system gets the job done instead.

Sure, naked mole rats are odd, but why do so many researchers study them? Despite their death-defying characteristics, muddled DNA and strange social norms, the wrinkled wonders are still mammals.

Much like how researchers use mice in the lab to understand how certain processes might work in humans, studying the naked mole rats' peculiar traits might allow us to translate those abilities to humans.

Cancer immunity, pain resistance and tolerance to zero-oxygen conditions, for example, aren't commonplace in humans. But studying these traits in another mammal could help us break down the mechanisms behind them — and one day develop treatments for our own species.

While the research continues, our fascination with these strange creatures remains steady. Several museums across the country have mole rat cams where you can watch colonies live out their lives online. And maybe, if you're lucky, you can see some in person at your local zoo — or even in the wild.