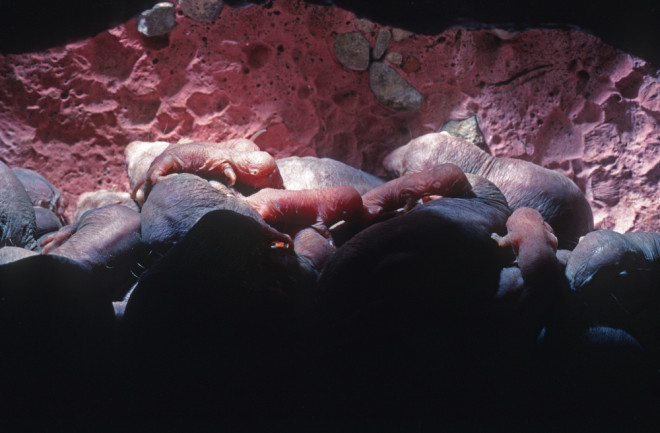 As in marriage, business and volleyball, good communication is essential for the health of any society. That's doubly true when you're the sole ruler of a thriving colony of dozens of pink, wrinkly and decidedly unconventional mammals.

To pass directives to their workers, naked mole rat queens have internalized — and then externalized, as it so happens — this tenet of societal well-being in a brow-raising, though certainly effective manner. Faced with the numerous constraints brought on by living in a warren of tunnels underground, they've opted to communicate with their poop.

In the East African desert, resources are slim, so naked mole rats have adopted the practice of coprophagy, or poop-eating. Though it sounds objectionable to us, it allows them to supplement their diet of roots and tubers, and passes gut bacteria crucial for digestion on to pups.

Along with nutrients and bacteria, though, some worker rats are ingesting something else in their fecal food. Female workers near the queen get hormonal messages that their leader passes on in her poop. These messages let them know when she's about to give birth. Apprised of incoming babies, the workers get more attentive to the cries of pups and display more motherly behavior.

While other species use hormones to communicate with each other, it's quite uncommon for them to be passed on in poop. This kind of hormonal note-passing may have arisen because naked mole rats, while excellent smellers, don't have the well-developed pheromone sensing organs that other species do. Or it may be that airborne scents simply don't move well in poorly-ventilated underground tunnels. In any case, it appears that the system functions well for the wrinkled wonders.

In naked mole rat colonies, the queen and a few males are responsible for breeding while the rest of the workers remain sterile. This division of labor means that worker females are responsible for pup-rearing, something known as alloparenting. Along with coprophagy, and a host of other surprising adaptations too numerous to name here, it's something that allows naked mole rats to prosper underground.

Only recently, though, did researchers from Japan put the two together. In experiments with a laboratory colony of naked mole rats, the researchers fed worker females fecal pellets from both pregnant and non-pregnant queens and watched to see how responsive they were to the cries of pups. Those who had ingested fecal matter from queens who were with child were more attentive to cries.

They also tried the same thing with fecal pellets from non-pregnant queens with estradiol, a pregnancy hormone, added to them, and got the same effects. The experiment singled out estradiol as the hormone responsible, and further experiments with the worker females found that their levels of the hormone tracked the queen's as she went through a pregnancy. In effect, the worker rats were experiencing a kind of pregnancy-by-proxy, and the end result was to bring out mothering instincts in them to coincide with the birth of a fresh round of pups.

In this sense, it's a little less like communication and more like brain-washing, but the result is worker females who are better surrogate mothers to the new generation of naked mole rats. The ends justify the means, perhaps. The research appeared Monday in the Proceedings of the National Academy of Sciences.