Mystery of the Vanishing Eels

Tackling a migration enigma, scientists are getting a grip on where these slithery fishes call home. 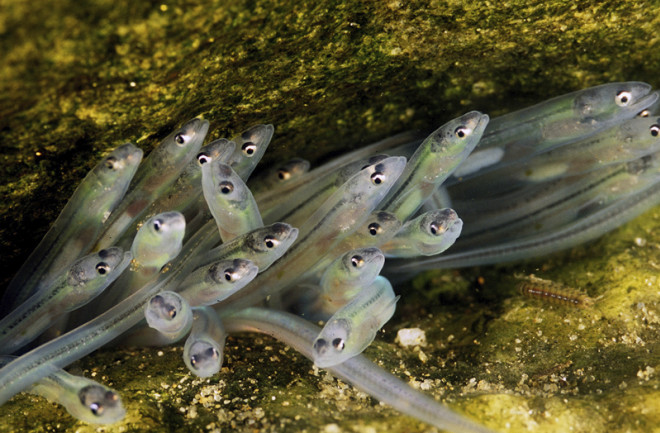 Johannes Schmidt spent 25 years chasing an enigmatic fish across the Atlantic Ocean. The Danish biologist surrendered the hunt only after his ship was torn to pieces on a Caribbean coral reef. Schmidt was trying to solve an ancient mystery about one of nature’s strangest fish: eels. Aristotle suggested the slithering species emerged spontaneously from the earth. But by the early 1900s, Schmidt and others suspected eels bred in the open ocean, instead of their lifelong freshwater homes.

Schmidt’s early sea expeditions stayed close to shore, casting nets off European coastlines. Then, in 1904, he caught a young eel south of Iceland, implying the fish were indeed spawning at sea. So Schmidt journeyed farther into the open ocean. The tinier the eels he found, the closer he figured he was to their spawning grounds.

Eventually, he sailed from northern Europe toward the Caribbean, ultimately catching dime-sized eels near the Sargasso Sea. It’s an enormous patch of seaweed in the southwest Atlantic Ocean. He guessed this calm stretch of ocean was the eel asylum — the place where European and American eels are born, spawn and die.

It’s been nearly a century since Schmidt’s hypothesis, but eels still haven’t surrendered their secrets. We now know that American eels inhabit streams, lakes and rivers from Venezuela to Greenland, and the similar (yet genetically distinct) European eels live anywhere from Norway to North Africa. But scientists still haven’t seen these eels spawning. So, that eel you ate on your sushi roll? No one knows for certain where it was born.

In recent years, however, scientists have been closing in. Like Schmidt, they’re trying to track eels as they migrate back to the Sargasso Sea. To crack the case, Canadian researchers devised a way to attach satellite tags to the eels to trace their routes during the 1,500-mile swim from shore.

Along the rugged coast of Nova Scotia, scientists caught several dozen eels in 2014. They dumped the slithering fish into a water tank in the back of a pickup truck and drove to the little village of Bay St. Lawrence. There, the team attached satellite tracking tags — picture several feet of eel dragging a huge fishing lure — and put the fish back in the Atlantic. They’d tried a similar feat the two previous years, releasing the squirming fish from a nearby estuary, but sharks ate all the eels before they reached the open ocean. Just eight of the 38 eels released over the course of the three-year experiment even made it to the ocean.

Biologist Mélanie Beguer-Pon of Quebec’s Laval University says tracking the eels is hard because the tags are cumbersome for the eels. They’re also expensive, so scientists can only buy so many.

One eel from the 2014 tracking attempt did make the team’s efforts worthwhile. Eel No. 28 swam from Nova Scotia and reached the far northern limit of the suspected Sargasso Sea spawning site — a first. But that’s where No. 28’s tag popped up to the surface, as designed, leaving the team to guess at its fate.

“We don’t know what happened to the eel and why it went much farther than the others,” Beguer-Pon says. “We just hope that eel No. 28, as the other tagged eels, all made it to the spawning area in the Sargasso Sea.”

Scientists recently released satellite-tagged eels along the Nova Scotia coast and tracked one all the way to the Sargasso Sea — a first. (Credit: Martin Castonguay)

No. 28 also taught Beguer-Pon’s team about its migration route. The fish commuted in two phases. First, it swam north along the continental shelf in shallow waters about 100 miles from the Canadian coast. Then it made a beeline south for the Sargasso, vanishing east of Bermuda and confirming Schmidt’s theories nearly a century earlier.

And late last year, a large group of European scientists published their results of tracking eels from that continent. They tagged some 700 eels, but only 87 made it from coastal waters into the open ocean. Then predators ate most of the fish not long after they left the coast. None made it to the Sargasso.

“How they get there is not known,” says behavioral ecologist David Righton of the Centre for Environment, Fisheries and Aquaculture Science, “or why the journey has become so long over evolutionary time.”

Other adult fish, like salmon, live their lives at sea and return to the rivers and streams of their birth to spawn. Eels do the opposite: They’re born in the Sargasso, and then ocean-spanning currents carry them to their home waterways, whether that’s in Maine or Maryland. That ride determines where they end up. But on their return trip, eels aren’t heading for some set location. The Sargasso Sea’s boundaries shift because it’s surrounded by ocean currents; it’s the only sea not bounded by land. So how do adult eels know where to go?

“Navigation is likely helped by a number of cues and clues like odor, magnetism and other oceanographic features,” says Righton, the lead author on the 2016 European study published in Science Advances.

Recent genetic studies are also uncovering clues about eels’ hidden spawning. Lab studies reveal that European and American eels each belong to a single population. So an eel that lives in a Norwegian fjord is no more cold-adapted than one living in the Mediterranean. It implies that these eels, like their kin in other oceans, breed in massive orgies, with European eels mating somewhere east of American eels. Scientists call it panmixia. “It takes place deep in the water column, not on the surface,” says ecologist José Martin Pujolar of Denmark’s Aarhus University. “That’s why no one has seen it.”

To picture this secret spawning, imagine swarms of eels writhing about in the dark. The males cast their sperm into the water. The females are fertilized at random — no natural selection during breeding — and then lay millions of eggs. Afterward, all the adults likely die. The little orphan eels then venture back to their species’ coast.

“These are tiny little creatures, and they do not swim that well,” says oceanographer Irina Rypina with the Woods Hole Oceanographic Institute. Her team modeled how eel larvae traverse the Atlantic and found that the tiny fish must swim their way toward currents, which help them along to far-off shores.

Earlier this spring, an American-led team of scientists explained how that happens in the journal Current Biology. The team let young eels swim around a contraption that mimicked the magnetic fields found along the animals’ migratory path. Rather than guiding the little swimmers toward land, the researchers found infant eels have a “map sense” that steers them toward the Gulf Stream, which offers an easier ride toward Europe. Another team, which published results in Science Advances in June, tested even younger eels in a Norwegian fjord and found similar magnetic navigation abilities.

Catch as Catch Can

Scientists hope that unraveling the eels’ secrets will help recovery efforts. Baby eels, called elvers, now face a major obstacle to survival. Elver fishing is booming in Maine and along the East Coast. The Japanese have obsessed over “unagi no kabayaki,” a type of grilled eel, since ancient times. So as global fisheries have banned the capture of eels to protect populations — Japan did so after the 2011 tsunami — consumers have turned to American eels. European eels are also critically endangered.

American fishermen can now net thousands of dollars per pound for the live, squirming elvers. Once caught and sold, they’re shipped to farms in China and Japan, where they’re raised to adulthood and sold globally for sushi.

That makes understanding the natural migratory path crucial to preserving the species. For instance, knowing that eels in Spain and Sweden are no different could add geographic flexibility to reintroduction efforts. And a better understanding of how eels reproduce might one day let people farm eels from birth, something that’s currently impossible. But until cameras catch eels spawning in the Sargasso Sea, scientists can’t fully claim they’ve put Aristotle’s mystery to rest.

This story originally appeared in print as "Mystery of the Vanishing Eels."