Music: The Good, the Bad and the Ugly 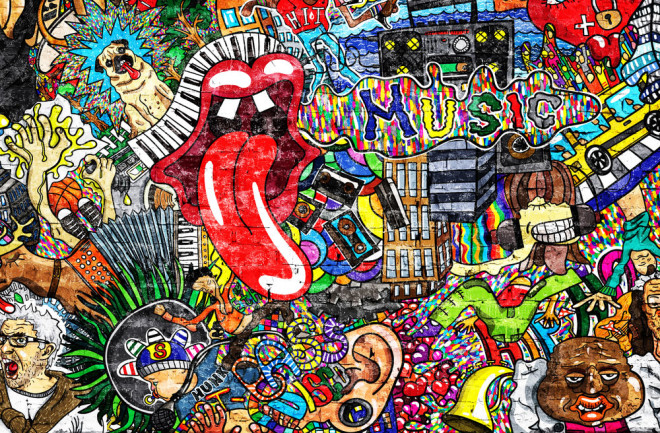 (Credit: Zarya Maxim Alexandrovich/Shutterstock) Our lives are awash in tunes. Songs are blasted through the radio, piped into supermarkets, they waft through the air at public gatherings and soundtracks can make or break a blockbuster movie. Humans seem obsessed with melody and rhythm. But when did it begin in hominin history? What purpose does it fulfill? And does music have a dark side? The first bands started gigging at least tens of thousands of years. Archaeologists have found 40,000-year-old flutes carved from bird bones. The specimens’ craftsmanship suggests that hundreds of years of proto flutes must have been made, either of bone or organic materials (reeds, grasses or wood that has not survived), says Jeremy Montagu, an ethno-organologist, or expert in musical instruments, at the University of Oxford. He is author of an article on the genesis of music published this month in the online journal Frontiers in Sociology. Montagu claims that hominins, 1 million years ago, had the anatomical capability to sing, though it’s of course unknown if they did. Singing, he claims, probably preceded speech. Animal calls by ancient hunters could have been the grist that led to structured melody and rhythm — in other words, songs. Montagu imagines early humans finding a rhythm while making tools or skinning animals. “It is well accepted in anthropology that when people are working, or moving together, their movements fall into a rhythm, that people may grunt and make other noises into that rhythm,” Montagu writes. “The grunts may move into something that verges on or morphs into song.” Lullabies from mother to child may have been an early song form, he adds. (A Discover story from the June 2017 issue discusses how lullabies might have evolved.)

There are several reasons for why hominins developed music, according to Montagu. They include communication, ritual and, most important, social cohesion. As with religion (the consummate purveyor of ritual), melodies bring people, family and groups together. “It may be that the whole purpose of music was cohesion — cohesion between parent and child, cohesion between father and mother, cohesion between one family and the next, and thus the creation of the whole organization of society,” Montagu writes. Music can uplift people’s mood, create a shared sense of intimacy in a group and create a feeling of self-empowerment, writes Paul Elvers, a music researcher at the Max Planck Institute for Empirical Aesthetics in Frankfurt, Germany, in an article published last year in Frontiers in Sociology. The right song can also enhance the mood of a person involved in repetitive work and in physical exertion. A 2009 study led by psychologist Laura Mitchell found that people listening to their favorite music could withstand their hands being placed in icy water longer than the participants who performed the experiment in silence. The music listeners also reported less discomfort.

But there is also a dark side to melody and rhythm. Music makes a direct appeal to the emotions, which is why Plato was suspicious of it. “When a man abandons himself to music,” he wrote in The Republic, “he begins to melt and liquefy.” Music is not rational. It can lead people to commit rash actions. It also bestows grandeur on events and words that bedevils common sense. It’s easy to find contemporary examples. Hollywood is aware that dropping in a musical score behind movie dialogue makes the content more dramatic and ring deeper, even if it reads as drivel when printed out on white paper. Few lyrics of popular songs can stand as poetry, yet the music carries us along, adding weight to what otherwise is middlebrow or nonsense sentences (e.g., The Beatles: “I am the eggman, They are the eggmen / I am the Walrus / Goo, goo, ga-joob”). “Most opera lyrics are second-rate poetry, most musical-theater songs are worse, and most popular tunes are worse yet,” wrote American author Joseph Bottum in a 2000 essay on music in The Atlantic. If music is emotion, its expression may not always be a happy one. Setting aside musical devices of dissonant intervals and minor and major modes, how music is experienced depends greatly on a listener’s mood, taste and beliefs — or those of the group he or she is part of. Montagu’s definition of music is “sound that conveys emotion.” But “what that emotion may be is largely irrelevant to the definition; there is an infinite range of possibilities,” he writes. Montagu acknowledged that, in the Neolithic period, as populations increased and resources became scarce in regions, music likely was used to help bind the men together to fight other tribes. It’s not hard to imagine a pre-historic group working themselves into a frenzied state around a nighttime fire to the beat of drums and warrior wails. It’s not an accident that music has been part of wars for centuries. Music has even been used as a weapon. In 1944 at Auschwitz, the Nazis played happy songs on a phonograph as prisoners marched back to camp after a grueling day of labor; a mocking gesture meant to break prisoners’ spirits. More recently, in its war against terror, the United States employed music as psychological warfare against suspected terrorists at Guantánamo, Abu Ghraib and other holding sites—they blasted suspects with songs like the Barney theme song, or the Meow Mix jingle on a loop, 24/7. Music is cohesive and brings groups together, Montagu reiterated in an email. But “what each group does [with it] is up to them,” he went on to say. “Of course, some [applications] are good and some are evil — we are humans.”