Mummies in the Americas Belong to a Vanished Civilization 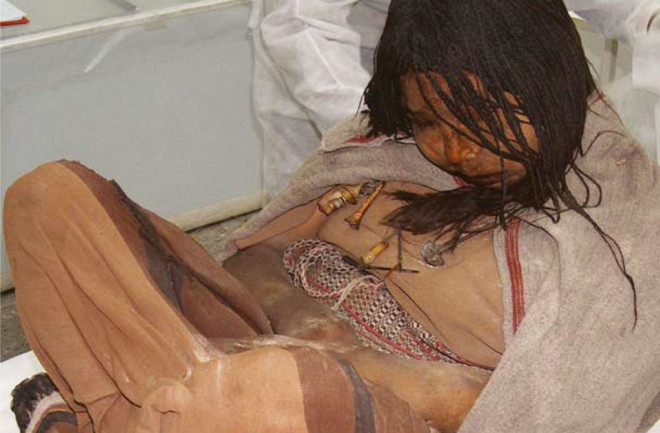 The remains of a young girl called "La Doncella" who was discovered frozen in the Andes, likely sacrificed. Her DNA was among the samples used in the study. (Credit: Pedro Groover/Flickr) In a comprehensive study, researchers have mapped the spread of indigenous settlers throughout the Americas, from their first steps off of the Bering Land Bridge some 16,000 years ago to their sudden disappearance in the 15th century. That’s when Spanish and Portuguese explorers all but wiped them from the face of the Earth.

To accomplish their task, researchers from the Australian Centre for Ancient DNA (ACAD) at the University of Adelaide enlisted the help of 92 mummies and skeletons ranging in age from 500 to 8,600 years old. By sequencing mitochondrial DNA from these specimens, the researchers were able to construct a rough timeline of population dispersion in the Americas. They found that a small group of indigenous settlers first reached the continent from Siberia and moved down the Pacific Coast around the year 14,000 B.C. These groups spread throughout the Americas relatively quickly, the researchers say, reaching the southern part of Chile roughly 1,500 years after they entered what is now Alaska. Using a computer model, the scientists traced back differences in the mummies’ DNA to see where various mutations occurred. If a mutation stayed around for a long time, they could assume that particular specimen belonged to a distinct group, where interbreeding would not cause it to disappear. Compiling a list of these unique mutations and cross-referencing with geographic information gave them a rough idea when and where various populations split off. The team published their research Friday in the journal Science Advances. Because the original group of inhabitants was so small, the scientists started off with a relatively limited gene pool, making it easy to track subsequent mutations. Additionally, working with a large sample of specimens allowed them to track populations over a period of thousands of years.

The indigenous people would go on to become great civilizations like the Aztecs, Inca and Maya, as well as countless other small tribes. The arrival of the first European explorers, however, brought new diseases such as smallpox, typhus and the flu, which they had never been exposed to. After the epidemics had finished their deadly rampage, the number of indigenous people was reduced to a mere handful. Those who survived were quickly absorbed into European bloodlines. The drastic decline of indigenous populations following the arrival of the conquistadores was well documented, but never empirically proven. Now, peering back in time with the help of genetics and statistics, the researchers were able to definitively show the unprecedented decimation in South and Central America. It didn't take much detail to identify the sudden disappearance of almost all genetic lineages in the 1400s, however. The native people had been separated from Europeans for thousands of years, producing marked changes in their DNA. The sudden switch was immediately noticeable. The researchers compared the DNA of indigenous people today to that of the ancient mummies and found no evidence that the two populations were related. They did not analyze DNA from Native Americans in North America, however, who were largely unaffected by European settlers at that time. "Surprisingly, none of the genetic lineages we found in almost 100 ancient humans were present, or showed evidence of descendants, in today's indigenous populations," says joint lead author Dr Bastien Llamas, Senior Research Associate with ACAD, in a press release. In other words, the populations of South and Central America were essentially destroyed and replaced around 600 years ago.