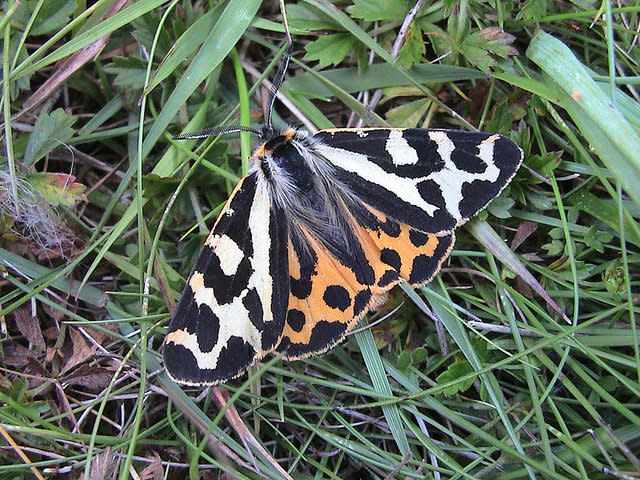 You should never bring a knife to gunfight, or try to beat a bird with ant repellant. That's how the expression would go if a wood tiger moth coined it, anyway. Other animals are lucky if they have the resources to make just one poison. But this moth is the first species known to make two different chemical weapons that target different predators. The moth, Arctia plantaginis, lives throughout the Northern Hemisphere. Its wings are bright and boldly patterned, a tactic that many animals use to warn predators they're poisonous or bad-tasting (because even better than tasting gross to your enemy is never ending up in its mouth at all). If a predator does attack, the wood tiger moth may ooze liquids from two parts of its body. It secretes fluids from its abdomen "in response to subtle disturbances," write Bibiana Rojas of the University of Jyväskylä in Finland and colleagues. Or the moth may leak what the authors call "neck fluids" in response to being squeezed near the head. To study the difference between these two goops, the researchers bred wood tiger moths in the lab. There, the insects enjoyed eating dandelion leaves and not being attacked by any other animals. But the researchers squeezed the moths' necks or abdomens to make them surrender some of their liquids, then tested the effects of those liquids on other creatures. First, birds. The scientists offered oats to blue tits, three little flakes at a time. They had soaked the oats beforehand in moth neck fluids, abdomen fluids, or plain water. Then they watched to see how quickly the hungry birds approached and ate the oats. They also tested the fluids on ants. The researchers went into the woods in Finland and found ant colonies, then placed little discs in the middle of existing ant trails, where the insects would have to walk over them. Each disc held drops of liquid: either plain sugar water, or moth neck or abdomen fluids mixed with sugar water (to make it more likely the ants would taste them). Birds wanted little to do with the neck fluids from moths. They took longer to approach oats that had been mixed with this liquid, and were slower to eat them. But oats mixed with abdominal fluids didn't bother them. Ants, on the other hand, were reluctant to drink from droplets of moth abdominal fluid. But they didn't mind the neck fluid—in fact, they preferred it to plain sugar water. Chemical analysis confirmed that the makeups of the two liquids were different. The authors say this is the first evidence of one species producing two different defensive chemicals to fight off different types of predators. In the neck fluids, the scientists found a chemical called SBMP that they believe deters birds by making the liquid smell foul. Birds often grab moths by their heads. So it makes sense that the bird-deterring weapon comes out when a moth's neck is squeezed. The abdominal fluid might work better against ants and other predators that attack from the surface a moth is resting on. Wood tiger moths mainly ooze their abdominal goo during their earliest adult days. The authors point out that this weapon might even be the remnants of the liquid that was inside the pupa. When the moth has finished metamorphosing and is just wriggling out of the pupa, it's especially vulnerable to predators. The scientists still don't know how the wood tiger moth makes both of these fluids. It must be costly for the insect to make not one, but two separate defensive chemicals. But for this species, apparently, it's worth it to always bring the right weapon to a fight.

An Explorer Tours the Planet of the Viruses