Moth Drinking Tears of a Sleeping Bird Caught on Video

It's as weird as it sounds. 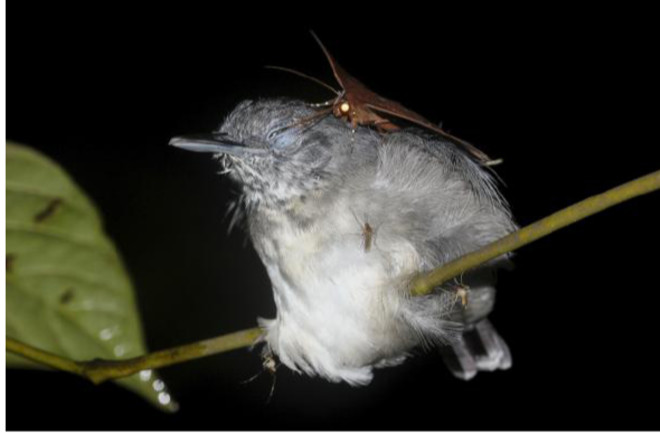 In what is perhaps the strangest update we’ve heard from ecologists in a while, a Brazilian researcher has documented – on video – a moth feeding on the tears of a sleeping bird.

The researcher, Leandro João Carneiro de Lima Moraes from the National Institute of Amazonian Research, was conducting amphibian and reptile surveys in the Brazilian Amazon last November when he noticed the behavior – twice in one night – and got it on camera.

Though a human observer might be tempted to consider this behavior somewhere between gross and creepy, the observation might not be terribly surprising from a biological standpoint.

Moths have been fairly well documented sipping on crocodile tears (turtle tears are also fairly common), and there have been a few previously recorded observations of moths drinking from the eyes of birds.

But the moths aren’t just thirsty and kind of weird; there are a handful of reasons why tear drinking makes biological sense.

The moths are likely searching for specific nutrients – like sodium and specific proteins – that are important for moth health and can be found in the tears.

Besides, a sleeping bird, or another relatively immobile animal like a sunbathing croc, is an easy target. The moths’ long proboscises make it so they don’t have to land too close to the eyeball, which might disturb the animal.

More research will be needed to flush out the exact details surrounding this oddball eyeball moth behavior, so for now, enjoy this video.

This observation was published in the journal Ecology.

Video: An erebid moth (Gorgone macarea) feeds on the ocular secretions of a Black-chinned Antbird (Hypocnemoides melanopogon) in the neotropical forest in Amazonas, Brazil.