Monkeys fall into the uncanny valley

In the movie industry, special effects and computer-generated imagery are becoming better and more realistic. As they'd improve, you'd expect moviegoers to more readily accept virtual worlds and characters, but that's not always the case. It turns out that people are incredibly put off by images or animations of humans that strive for realism, but aren't quite there yet.

A character like Wall-E is lovable because he's clearly not human but has many human-like qualities and expressions. In contrast, the more realistic CG-characters of Beowulf or The Polar Express are far closer to reality but somehow less appealing because of they haven't tripped the finish line. This phenomenon is called the "uncanny valley" - it's the point where, just before robots or animations look completely real, they trigger revulsion because they almost look human but are just off in subtle but important ways. 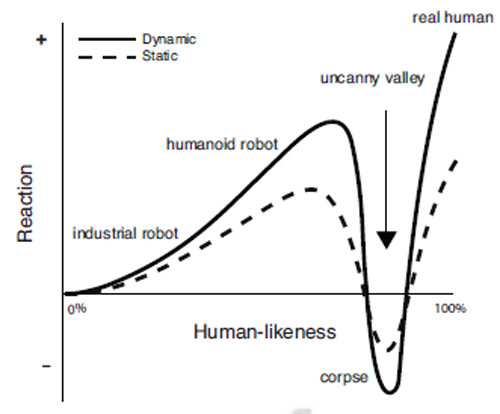 This isn't just a quirk of humans - monkeys too fall into the uncanny valley. Shawn Steckenfiner and Asif Ghazanfar from Princeton University showed five macaques a set of faces of real or CGI faces, pulling a few different expressions. They found that all five macaques consistently reacted more negatively to realistic virtual monkey faces than to either real or completely unrealistic ones. They spent much less time looking at the realistic avatars than the other two options, particularly if the faces were moving rather than static.

Steckenfiner and Ghazanfar say that the simplest explanations is that the monkeys "are also experiencing at least some of the same emotions" as humans. But for the moment, we can't say if the monkeys felt the queasy disgust that humans do when we fall into the valley, or whether they were simply more attracted to the other two options.

The best way to do that would be to repeat these experiments while looking for possible signs of unease - sweaty skin, dilated pupils or clenched facial muscles, as examples. Steckenfiner and Ghazanfar also want to see if combining fake faces with real voices would put the macaques are greater or lesser ease.

For the moment, the duo hopes that macaques will be able to help us understand why the uncanny valley exists, or what goes on in the brains of people who feel its characteristic revulsion. For a start, it's not about movement. The realistic virtual faces were only marginally less attractive to the monkeys when they moved compared to when they were static.

Steckenfiner and Ghazanfar's favoured idea is that the part of our brains (and those of macaques) responsible for dealing with faces fires up when it sees realistic animations. But the features of these avatars fail to meet the expectations that we've built up through a lifetime of experience. Perhaps their skin colour is slightly off making them look anaemic. Perhaps their skin is too smooth, or their features out of proportion. Whatever the clash, the idea is that the increased realism lowers our tolerance for these anomalies.