In a classic episode of the Simpsons, Homer's brain explains to him that "money can be exchanged for goods and services". That's obviously true for humans (even cartoon ones) but monkeys use an altogether different form of payment - grooming. It's as close to a currency as monkeys have and it can be redeemed against a wide range of goods and services including more grooming, a free pass from aggression, permission to handle babies, back-up in fights and even sex.

The purposes of these exchanges go well beyond cleaning. Grooming, it seems, is also an enjoyable activity that releases brain signalling chemicals involved in pleasure and rewarding feelings. It's a social bonding activity, the monkey equivalent of a human hug. Grooming does have costs though, despite its appearance as a leisurely activity. For a wild monkey, time spent cleaning a peer is time that's not spent foraging yourself or watching out for predators. So it pays an individual to groom only as much as it needs to.

Cecile Fruteau from the University of Tilburg has been studying the exchange of grooming among wild vervet monkeys in South Africa's Loskop Dam Nature Reserve. Through her experiments, she has shown that vervet grooming works like a biological market, governed by the laws of supply and demand. The amount that any individual is willing to give in exchange for a service depends on how rare or abundant it is.

After seven months of initial observations, Fruteau's team created an artificial market for two groups of vervets with the aid of mechanical food containers. Each housed five pieces of apple that were unreachable, but could be seen through a plastic mesh. The team trained one low-ranking female in each group to open the containers by touching the lid (when they did, one of the researchers triggered it with a remote control).

At first, the subordinate monkey spent much more time grooming others than being groomed herself. This inequity stems from the fact that grooming is the only currency that subordinates have to trade with, while dominant females can offer other resources like support or even tolerance. But suddenly, the subordinate monkey became leadership material, gaining the power to bestow a small banquet upon her group. When this happened, she suddenly transformed from groomer to groomee with the rest of the troop combing through her fur far more than she combed through theirs.

Things changed in the next phase, when the team introduced a second food container that opened in a different way and trained a second low-ranking female to 'open' it. Now, the five-apple bonanza was sliced into smaller pieces and divided between the two containers.

The monopoly of the first female had suddenly become a duopoly and her unique selling point was no longer unique. As a result, the amount of grooming she received fell to somewhere between its level before the containers and her later heights of power. Meanwhile, the second trained monkey started receiving more grooming and the two box-openers ended up meeting in the middle. 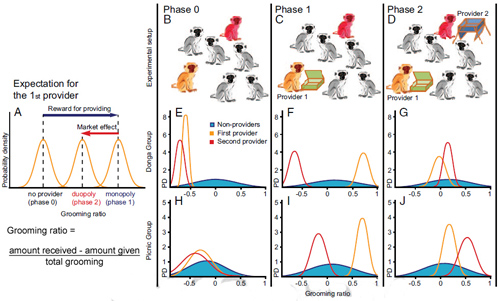 These are exactly the sorts of pattern that market theory would predict. The value of the first female's container-opening ability fell by half when the second female was trained and the grooming she received followed suit. The second female's stock rose, but only to half the extent that that of the first female initially did - the fact that two of them could provide a service meant that it became less valuable than when one monkey operated without competition.

Fruteau confirmed that these social shifts weren't down to radically different behaviour among a few individuals, but due to broad changes among the various relationships of the troop. These changes happened very quickly, which suggests that this sort of strategic behaviour is all part and parcel of a vervet's life.

In these natural markets, exchange rates could be set in two different ways - the individuals who provided the apples could be groomed more or they themselves could groom others less. Individuals can end a bout of grooming at any time and check their partner's reaction - signs of dissatisfaction would mean more coming from someone that controls goods, be it through rank or through knowledge (such as the location of food).

In this way, bouts of grooming at like a continuous negotiation, where the monkeys set the price of their exchanges in a dynamic way. It allows them to fine-tune their monkey business without the need for bankers, contracts or consultants.