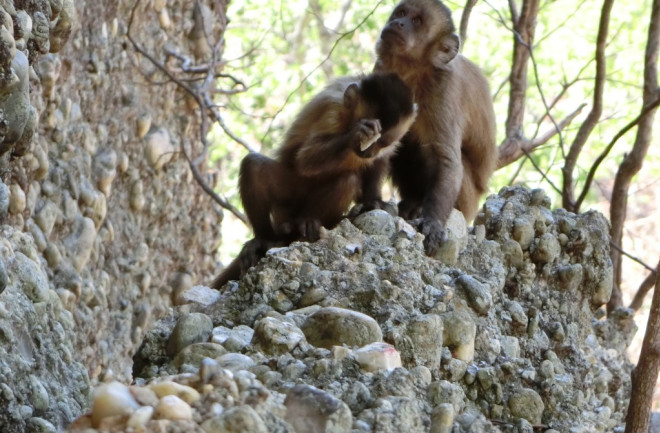 A capuchin monkey repeatedly smashes one rock into another in Brazil's Serra da Capivara National Park. The other monkey wears the same expression of anyone who's ever had a roommate learning to play the drums. Credit: M. Haslan. Stone tools are arguably the most important artifacts we have in telling the story of human evolution. While they're not as helpful as finding actual bones, the tools are much less fragile and can give researchers a lot of valuable insights. The way a tool was made tells us about the individual's hand strength, for example, and maybe even the toolmaker's cognition and language skills. In the absence of fossils, stone tools can be an important way to document that humans were even present at a site. But what if I told you a new study suggests that it might be bananas to assume sharp-edged stone tools are evidence of hominins? Making stone tools with sharp edges was long thought to be a distinctly Homo skill set. New research, however, has been chipping away at that idea. Last year, for example, researchers announced they'd found stone tools significantly older than our genus. Also in 2015, a separate team studying hand strength in both humans and an earlier hominin, Australopithecus africanus, found that our ancestral kin were capable of the same power grip that allows us to hold hammers (well, most hammers, anyway). And now, researchers have documented monkeys intentionally smashing stones into shapes that look an awful lot like stone tools found at hominin sites around the world. While they're not claiming the monkeys are using the sharp-edged rocks as tools the way hominins did, the researchers are suggesting it might be time for a reappraisal of stone "tools" that archaeologists have long assumed to be hominin-crafted artifacts.

To sum up their paper, published today in Nature, researchers working in eastern Brazil's Serra da Capivara National Park observed wild capuchin monkeys picking up certain types of quartzite stones and intentionally smashing them into other quartzite stones. Analysis of the stones afterward showed that the process created sharp-edged stone flakes which bore striking resemblance, even under a microscope, to other stone flakes which have been attributed to hominins, including members of our own species. While the researchers don't suggest the monkeys are using a hammer with the end goal of creating a sharp-edged stone flake, they do claim that their observations prove that sharp-edged stone flake creation is no longer just a hominin skill.

If I Had a Hammer

I contacted paleoanthropologist John Shea of Stony Brook University, who is a bit of a rock star when it comes to the study of stone tools. He was not involved with the study but is familiar with it.

In other words, just because bats and birds have wings, it doesn't mean they're closely related. And the differences in the hominin tools and monkey stones really emerge when you take a closer look at what happens after the stones are shaped.

The tools made by the monkeys (and also, says Shea, similar tools made by chimpanzees) are a lot bigger, proportionately, than hominin tools. "Imagine trying to pound a nail into a board using a brick or concrete cinder block. That’s non-human primate tool size scaled up to human size," Shea explains.

Aside from requiring a lot of energy to use, huge tools are also not exactly fun to carry around (just imagine the tool belt required). The smaller hominin tools, however, were not only easier to use but were often transported over large distances (hey, when you make the perfect hammer, you don't just toss it aside).

The second big difference is that hominins worked at knapping a tool just so to get a sharp edge that they could then cut with. Stone tools are often found alongside bones with cut marks showing they were used in butchering. Increasingly, the tools themselves are being tested for protein residues that can tell us what species was butchered with which tool.

The Brazilian monkeys, however, don't do anything with those nice stone shanks they're making. The edge is a byproduct, not the goal of all that smashing and bashing. So why all the rock-breaking work? The researchers themselves admit, they dunno. But after shaping the stone (see the smashmonkey in action for yourself over at YouTube), the monkeys do often appear to lick the rock they've been banging away on.

The researchers aren't sure what's going on with all that tongue action. They suspect the monkeys' smash-bash action may be to create quartz powder, which may have has some nutritional benefit (or maybe it just tastes delicious to the monkey...there's nothing in the paper that suggests the researchers gave it a lick). Monkeying Around With Archaeological Sites For more than two decades, wild capuchin monkeys have been observed using stones to break open nuts and perform other tasks, similar to chimpanzees. And, while interesting, finding a single population of capuchins creating sharp-edged flakes does not mean it's time to throw out everything we think we know about hominin stone tool creation and use, according to a commentary

on the study, also published today. Stone tool sites in Africa dating back hundreds of thousands and, yes, millions of years have been conclusively linked to hominins thanks to the presence of other material: hominin bones themselves, or evidence of butchery. We can also see a clear progression in the archaeological record from rather clunky Lomekwian tools to the more refined Oldowan style and finally the downright elegant Acheulean knives and pointy things, as beautifully demonstrated here:

Credit: Turkana Basin Institute/Stony Brook University. That said, however, there are a few stone tool finds in the Americas that have sparked ferocious debate. The best-known is Monte Verde

, in Chile, where researchers believe they've found evidence of human occupation up to 18,500 years ago, a few millennia before we believe the first humans crossed over to the Americas from Siberia via the Beringian land bridge. But other, even earlier South American spots have been declared proof of human habitation based on the presence of stone tools, including the controversial Toca da Tira Piera

sites in Brazil, both of which are more than 20,000 years old. Both sites are also in or near Serra da Capivara National Park, home of the stone-smashing monkeys. Coincidence or monkey business? Only further research will tell.