Citizen scientists report observations of species like monarch butterflies. Their efforts made a real impact on getting the special animals listed as globally endangered this year. 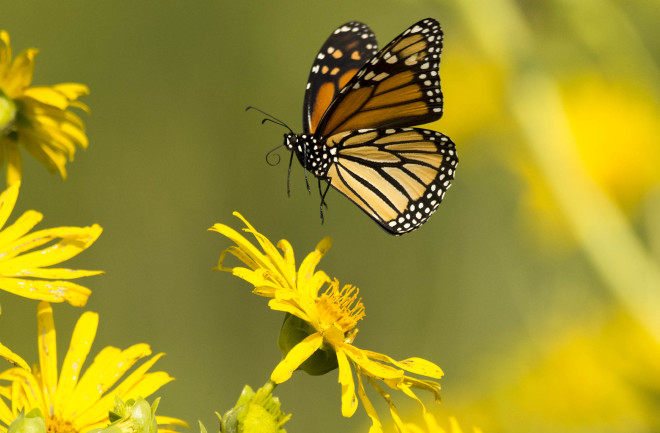 A monarch butterfly comes in for a landing. (Credit: Thomas Dunkerton/USFWS)

If you live in North America, chances are good that you’ve seen a monarch butterfly – if not highly enjoyed their pit-stops in your area. The black and orange beauties are a sure sign of the changing seasons, whether their arrival heralds spring, summer or fall where you live. With a flit, flit, float they glide over our gardens, looking for a sip of nectar or a milkweed leaf on which to lay their eggs.

Experts with the IUCN, which maintains the IUCN Red List of Threatened Species, officially listed the species as Endangered this July. It means they’re facing a very high risk of extinction in the wild.

Join us Tuesday, August 30, 2022 for a special SciStarter LIVE event: Observing Monarch Butterflies, for Science! Learn more and register for the free event.

Monarchs have a special migration pattern – it takes them multiple generations to travel across the continent. In summer, they live in the U.S. and southern Canada, nomming nectar from flowers and laying eggs exclusively on milkweed plants. In winter, they congregate in only a few sites in California and Mexico. It’s in these places where the decline has been most stark, and qualified the insects as endangered – in the winter of 2020-2021, they were only found in about five acres of forest. In California, they only counted 1,914 butterflies.

The monarchs’ biggest threat is logging and habitat loss in their wintering range. If the specific forests where these butterflies overwinter disappear, so will the monarchs. Add to that the widespread removal of milkweed plants – which are required for the monarchs to reproduce – all across their breeding range, thanks especially to improvements in the herbicides farmers use to keep agricultural fields weed-free. Top it all off with climate change bringing temperature extremes, droughts and shifts in the timing of when flowers bloom, it’s no surprise the butterflies are in such trouble.

The IUCN Red List is separate from the endangered species list maintained by the U.S. Fish & Wildlife Service, which offers species legal protections under the Endangered Species Act. Although the Red List has no legal backing, it’s considered the gold standard for assessing the status of species worldwide.

The new listing is important, explains entomologist Anna Walker, because it gives a frame of reference for how threatened a species actually is of being lost. “I think it’s really important to put the conservation status of an iconic species like the monarch into a global context,” Walker says. “It gives people a way to contextualize, how worried should we be?”

How a species gets listed as endangered

For a new species to get added to the IUCN Red List, conservation biologists like Walker put together a comprehensive report about how much the species’ numbers have declined and how fast, how much of their habitat has been destroyed, what threats remain, what conservation efforts are in progress and more.

“Most of the insect species I’ve looked at just have no information, and it’s really frustrating,” she says. “We did a project where we assessed all of the 132 North American firefly species, and more than half of them were data deficient, which just means we don’t know enough about the species to determine whether or not it’s at risk of extinction. That’s really common.”

Thankfully for monarchs, Walker had plenty of information to compile the report. “There was a lot of data to sort through, because there’s been not just academic research on it, but it’s a species that’s benefited from community science as well,” she says.

Walker says the most critical data for the assessment were population counts from the monarchs’ overwintering areas. “Because this butterfly clusters in a small area in the wintertime, it makes it relatively easy to figure out how many there are,” she explains. “Plus the overwintering population is smallest – that's when it has the least number of individuals, and therefore that's when it's the most vulnerable.”

Walker says her work in conservation would be easier if more people contributed to citizen science projects. “There just aren't enough researchers, we don't have enough resources for only scientists to be going out and collecting all of this data,” she says. “There are millions of insects, and we understand so little about most of them.”

Monarch butterflies have been somewhat of an exception due to their popularity. They’re easy to notice and identify, they’re aesthetically pleasing, they’re even easy to raise in classrooms or at home to release into the wild. As far as insects go, they’re incredibly well-studied and their declines well-documented.

“It's really, really important and people can make a big difference,” she says. “And I think the monarch is a good case in point for that.”

Take Part: Find citizen science projects that help monarchs near you on ScienceNearMe.org!

For instance, monarch tagging programs like the Southwest Monarch Study have led to a lot of researchers’ understanding about where specific populations – like those in Arizona – overwinter. “We definitely have community scientists to thank for a lot of the understanding we have about the migration,” says Walker.

Observations of milkweed, which can be submitted through citizen science apps like iNaturalist, can guide restoration efforts (where is milkweed missing?) and tell conservation biologists where important milkweed habitats are.

Even just general butterfly observations are helpful, too. For instance, the North American Butterfly Association holds an annual butterfly count, and that data is helpful for monarch conservation, too.  “Even if you're not looking specifically for monarchs, and you're just looking at butterflies generally, you can contribute to monarch research,” Walker says.

A future for monarchs

Walker did come across some good news while working on the IUCN report. Although monarch numbers are still too low, their decline at least seems to have tapered off a bit. Their summer breeding populations have been more stable lately. Walker suspects a big part of this is milkweed-planting efforts. “People are planting milkweed in their yards and their parks, and it seems like this might be making a big difference,” she says.