Mind-Controlling Parasites Find a Home in the Lab 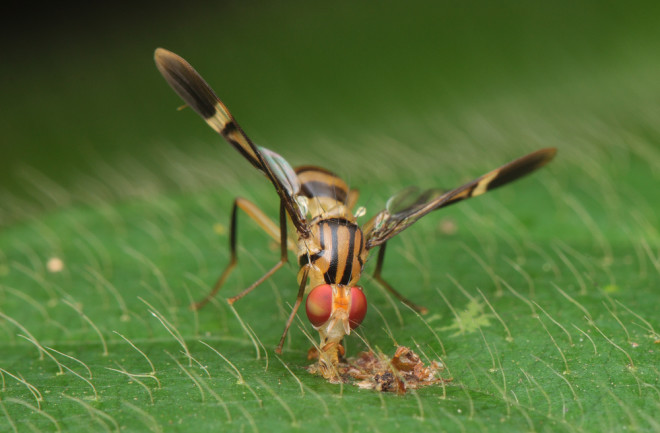 Fruit fly. (Credit: ELDIE AARON JUSTIM/Shutterstock) Mind-controlling parasites are the stuff of nightmares and blockbuster horror movies, yet organisms that turn normally sensible creatures into zombies are all too real. Most of the microbes and fungi that do this are restricted to the insect world, luckily, though those cases are gruesome enough. Ants with fungal spores growing from their heads, cockroaches eaten from the inside by parasitic wasp larva, fish driven to suicide-by-bird — the list goes on, and it's a veritable treasure trove of body horror.

How such parasites manage to gain complete control of their hosts is still poorly understood. There's evidence that many go right for the brain and manage to hijack neurons or launch chemical assaults to influence behavior, and at least one species of fungus takes control of ants' muscles directly, but most studies have so far been in species that scientists don't know well. That's why the realization that a type of mind-controlling fungus also infects fruit flies is such a big deal. It just so happens that fruit flies are one of scientists' favorite research subjects — they've been used to study everything from Alzheimer's disease to tissue regeneration and to screen for potential drug candidates. Fruit flies have been a scientific workhorse for over a century, and six Nobel prizes have gone to researchers studying them. The fruit fly genome was sequenced over 15 years ago, and researchers' have an intimate understanding of both their behavior and biology. In short, they're the perfect species to study parasitic fungi. The discovery in question actually happened by happenstance — researchers at the University of California, Berkeley were observing fruit flies outside for another research study when they noticed that a few had died in a very odd way. The flies had died with proboscis stuck to the researchers' dish and wings stretched out and upwards, a decidedly unnatural position. Looking closely, the researchers saw dark bands arching across their pale abdomens, a clear sign of infection by the fungus Entomophthora muscae. The parasitic fungus is known to infect other fly species, including the common housefly, but this is the first time researchers have studied it in fruit flies. They published their work this month on the preprint server BioRxiv. E. muscae lives out nearly its entire life-cycle in its fly hosts, and to do so it has become a master of puppetry. Once infected by a spore, which bores its way through the exoskeleton, flies have only about four days to live. Roughly 72 hours after infection, the fungus spreads throughout the unlucky fly's body, consuming organs and bodily fluids for nourishment and eventually infiltrating the nervous system. Once there, the fly's actions are no longer its own — it begins crawling upward, pausing only on the brink of death to anchor itself by the proboscis to whatever surface it's on and lifting its wings to the sky in a final salute. From there, the fungus forms structures called conidiophores that push their way through the dead fly's abdomen to release spores into the air. Individual spores are ejected at an astounding speed — the researchers had to use a high-speed camera at 54,000 frames per second to capture the process — and they rain down in search of another fly to infect.

Timeline of an Invasion

With DNA sequencing and microscopic imaging, the researchers watched this horrifying process unfold, gleaning some insights into how the fungus does its dirty work. By first sequencing the DNA of infected flies at various stages and looking to see how much fungus DNA showed up, the researchers gauged how fast the infection spread. They found that fungus doesn't actively divide until about 48 hours after entering the fly. At 72 hours, though, just a day later, the majority of DNA sequences they read came from fungus, not fly. Two dead flies in particular showed only trace amounts of fly genetic material — though they looked like normal flies on the outside, they were an entirely different organism inside. Microscopic images backed up their findings. To see the process unfold for themselves, the researchers stained the flies with a dye that differentiated fly and fungus cells and sliced them into thin sections to be put under a microscope. Staggered at 24-hour intervals, the images are a time-lapse of a total body invasion. It starts slow: 24 hours after infection, the only thing noticeable is a heightened immune response. Just a day later, and the fungus has begun to take over — showing up in small quantities in the brain and hemolymph (the insect equivalent of blood). At 72 hours, the fungus is everywhere, eating fat reserves to sustain itself and beginning to invade the entire nervous system. At 96 hours, or four days, the hemolymph is almost completely taken over by the fungus and the fly has only hours to live. After it dies, the fungus feasts on the remaining organs to gather strength before bursting out — the researchers couldn't even tell the sex of dead flies because their gonads had been totally consumed. Their research represents one of the most comprehensive views of a parasitic infection scientists have yet received. And, because the host is a fruit fly, researchers already have a deep understanding of their biology and possess the tools to conduct future research. Whatever they find, it will be an important insight into how "zombie" fungi operate, but it won't necessarily be the end of the story. This particular fungus infects flies, but there are numerous other mind- and body-controlling organisms out there, each of which has evolved alongside its hosts. Every mind-controlling parasite uses its own bag of tricks to take over hosts' bodies — meaning there's far more than one way to create a zombie.