Microcosm Winner #4: What Does E. coli Have to Say About Creationism?

Here's the fourth winning question about Microcosm, from Sigmund:

Creationists often point to the bacterial cell and say something to the effect of "the cell is so complicated it is highly improbable that it could have spontaneously formed - therefore God-did-it. Are there any particular features of E.coli that reveal simpler origins?

The answer below the fold... In Microcosm, I tell the story of how E. coli was embraced by the creationists. In particular, they adore the flagellum, the fast-spinning tail that E. coli and many other bacteria use to zip around. As far back as 1981, people from the Institute for Creation Research were announcing that the flagellum was like a Mazda engine--and the alleged likeness was evidence that it was created rather than evolved. The same argument was repurposed in the 1990s as evidence for "intelligent design"--aka, the progeny of creationism. The flagellum could not have evolved, it was argued, because it needs so many parts to work. Take away one part and it ceases to function. Ultimately the creationist love for the flagellum landned the microbe in court. Parents in Dover, Pennsylvania, filed suit because the school board had introduced intelligent design into science classes. The board's lawyers called expert witnesses to explain how the flagellum could not have evolved and showed pictures of E. coli's (since it's one of the best understood). The parent's lawyers called Ken Miller of Brown University to explain why the arguments didn't make sense. The best single introduction to the evolution of the flagellum came out not long after the parents won the Dover case. Mark Pallen of the University of Birmingham and Nick Matzke (now a grad student at Berkeley) surveyed the many lines of evidence pointing to the fact that the flagellum evolved. For one thing, there is no one flagellum, but lots of different ones with major variations from species to species. On the other hand, you can also trace relationships between the proteins that make up different flagella, as well as to the proteins in other structures in E. coli, as well as in other bacteria. Pallen and Matzke propose that these components were combined through evolution through a series of steps into full-blown flagella. The evidence continues to stream out of microbiology labs. Recently I was entranced by the picture I've reprinted below. On the top is E. coli's flagellum. On the bottom is a channel in the membrane of a microbe called Buchnera. Buchnera lives only in the guts of aphids--actually inside the insect's cells--and only spreads from mothers to eggs. Many studies have pointed to a close kinship between Buchnera and E. coli and its relatives. After they diverged and adapted to living inside cells, however, Buchnera underwent a drastic evolution, losing much of its genome and evolving adaptations to its peculiar niche. It helps aphids digest their food and gets lots of the compounds it needs from its host. Buchnera have lost their flagella, which is not surprising since they don't need to swim. But they haven't lost all their flagella proteins. The vestiges are left behind, still in the same arrangement as before. It's likely that these vestiges still function, allowing Buchnera to inject molecules into host cells and help them enter. In other words, you can indeed take away many parts of the flagellum and still have something that serves a function. 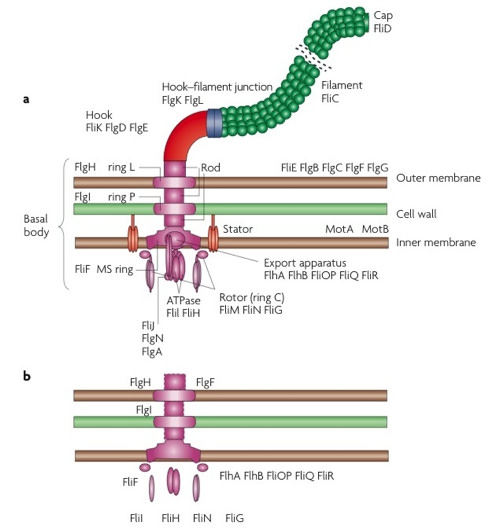 HealthAir Pollution Might Age Skin, But Is Anti-Pollution Skincare the Fix?
Recommendations From Our Store