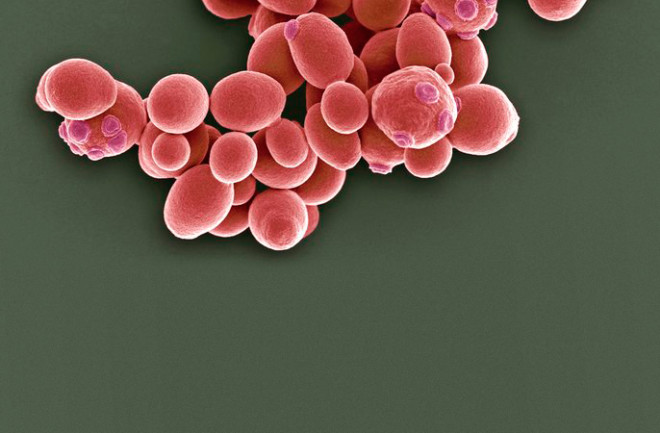 When Michigan State University artist Adam Brown learned of a type of bacteria, Cupriavidus metallidurans, that can extract pure gold from the toxic solution gold chloride (a totally artificial salt), he hurried to an expert colleague, microbiologist Kazem Kashefi, with a question: “Is it possible to make enough gold to put in the palm of my hand?” Brown merely wanted to satisfy his intellectual and artistic curiosity, inspired by the gold-tinted roots of alchemy, the precursor of modern chemistry.

Soon thereafter, Kashefi and Brown set to work designing a half-experiment, half-art-exhibit that exposes C. metallidurans to gold chloride in a hydrogen-gas-rich atmosphere that serves as a source of food. Over the course of a week, the bacteria gradually strip-mined the toxic liquid, leaving flecks of pure 24-karat gold behind.

The inefficient technique won’t supplant traditional mining, but the idea of using microbes as production facilities for a range of rare and difficult-to-produce materials has been gaining traction over the past several years.

An artist and a microbiologist created this experiment, which uses bacteria to turn gold chloride into microscopic gold.

OTHER MICROBIAL FACTORIES IN THE WORKS

Escherichia coli, or E. coli, is being used by University of Washington chemical engineer James Carothers to produce a chemical precursor of pristinamycin, an antibiotic used to treat staph infections. The microbial method could reduce the chemical-processing steps usually necessary to make the drug, potentially lowering the cost. Real-world deployment is at least five years out.

Biologist Jay Keasling of the University of California in Berkeley has shown how this species of yeast can be engineered to produce artemisinic acid, a key chemical compound in anti-malaria drugs, normally extracted from the wormwood tree. Limited supply has driven up the cost of the drug, but now pharmaceutical giant Sanofi-Aventis has licensed the technology to use S. cerevisiae for mass production.

Apply electric current to this microbe, and you produce pure methane, according to microbiologist Bruce Logan of Pennsylvania State University. Increasingly, methane is being mined through controversial methods like fracking, but with Logan’s technique, we could achieve green production of methane gas to power our appliances and heat our homes.

Across a range of applications, microbial factories just might introduce efficiencies that the Industrial Revolution never could achieve. “There’s a lot of promise in the approach,” Logan says.