It's as wild as it sounds. 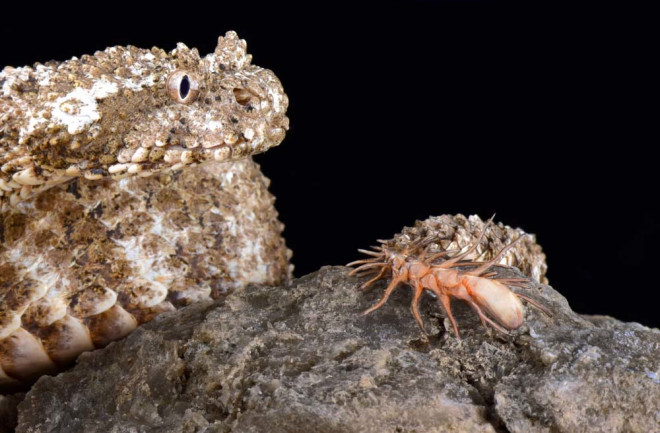 When Steven Anderson first examined a specimen of the Iranian spider-tailed viper, he, of course, noticed the arachnid-shaped lump on the dead snake’s tail. It was 1970, and the herpetologist was at the Field Museum in Chicago examining what the museum assumed to be a Persian horned viper, a snake common throughout the Middle East.

But this one had such a bizarre growth on its tail. To Anderson, a biologist who studies reptiles in Southeast Asia, it resembled “an oval knob-like structure,” with long scales resembling appendages or legs. But with only a single specimen, it was impossible to say if this tail modification was due to genes or something else, like a parasite or cancerous growth. For nearly four decades, the snake lurked in the back of Anderson’s mind.

“All of a sudden, a few years ago this Iranian amateur naturalist Hamid Bostanchi found another one,” says Anderson, now an emeritus professor at the University of the Pacific in Stockton, California. “And so then I realized there is something going on here.”

Unbeknownst to Anderson, the snake’s weird accessory was a caudal lure — an aggressive form of animal mimicry where a tail evolves to resemble the prey of another organism. When something like, say a frog, tries to gobble this fake food, it becomes food itself. In this case, the spider-tailed viper uses its caudal lure to capture birds.

Bostanchi’s second specimen was also dead and badly preserved — but the tails were similar. In 2006, Anderson and his colleagues published evidence that this was indeed a new snake species. They called it Pseudocerastes urarachnoides, meaning “fake horned with a spider-like tail.” Because the newer snake had a half-digested bird in its stomach, they believed that the viper might use the weird spider-shaped bulge on its tail as a way to attract prey.

Many animals, including a species of shark and some lizards, waggle their tails as a decoy that trick prey into coming near. Other snakes, especially vipers, employ this technique as well — but the spider-tailed viper stood in a league of its own. Still, to see just how deceptive the snake actually was, the researchers would have to find one alive in the wild.

It’s easy to miss the spider-tailed viper. Its skin is rippled with rough, corrugated scales that resemble the glittering hills of gypsum and limestone where it is often found. These are the Zagros Mountains and the snake blends right into this range that bleeds into Turkey and Kurdistan, although it’s only been found in western Iran. We still don’t know much about the snake, but you often won’t see one until it strikes, which can happen in less than a second.

In April 2008, a team tracked a pair of the vipers in the Ilam Province in Western Iran, and watched as one slithered into a cracked rock. When they illuminated the burrow with a torch, the snake hissed back. After cleaving the rock apart with a crowbar, they pinned the snake to the ground with a forked stick and captured it.

A close-up of the spider-like tail. (Credit: Bostanchi et al.)

The viper was transported to a cage in a lab that resembled the semi-arid land of scrub and forest the snakes normally inhabit. A few birds were released in the enclosure, and a video camera set up. The researchers watched as the snake gently swooshed its tail along the ground, the swollen bulb and frilly scales perfectly recreating the skittering motions of a tasty spider. The illusion is eerily accurate; several birds became instant meals after trying to attack what appeared to be a meal for them. Anderson and his team were right.

“It's one of those things that makes me feel awe in the power of natural selection,” says Kurt Schwenk, an evolutionary biology professor at the University of Connecticut, who specializes in the feeding and chemosensory systems of lizards and snakes. “The evolution of luring is more complex than contrasting color or simple shaking — the movement is precisely adapted to duplicate prey movement frequencies, amplitudes and directions, at least in specialized cases.”

It’s not uncommon for many snakes to do something similar with their tails to deceive prey. The common death adder of Australia buries itself in leaves, then writhes its tail like a worm to catch lizards and frogs. The Saharan sand viper conceals itself in sand with only its eyes and nostrils visible. When a lizard comes along, it sticks its tail out from the dirt, making it squirm like an insect larvae.

The behavior — and the elaborate body modifications that can accompany it — likely arose from a behavior common to many reptiles, Schwenk explains. When they are about to strike prey, any lizards and snakes enter a hyper-alert pose. The reptiles will focus their vision by cocking their heads to the side, arching their backs, and certain species will commonly vibrate their tail tip against the ground. This can distract the prey, which will shift its attention to the vibrating tail, ignoring the reptile mouth opening to grab them.

“This simple pattern leads to selection causing refining of the tail form and motion to be more attractive to such prey by more accurately mimicking actual prey movements,” Schwenk theorizes. “The other ancestral condition that could have led to caudal luring, or possibly an intermediate step in the process, is the use of tail vibration for prey distraction rather than for luring.”

Indeed, those most famous tail shakers, the rattlesnakes, sometimes also use caudal luring. For example, juvenile dusky pygmy rattlesnakes, whose rattle is so small it barely makes noise, wiggle their tails to attract prey. The behavior, in fact, may be key to how rattlesnakes evolved their distinctive rears, although this theory is somewhat controversial.

“Like many other apparently simple things in biology, there is a lot of complexity to caudal luring that has barely been explored,” Schwenk says. “Much of this has been considered in a piecemeal fashion, but a thorough review and synthesis ... has not been attempted.”

The spider-tailed viper’s distinctive caboose might also be leading it into trouble. Not long after this snake was first formally described, it became a matter of concern for the Iranians, Anderson says. Zoos and professional collectors have been looking for spider-tailed vipers, but the Iranian government has been reluctant to give any up, which Anderson says has likely led to poaching.

“I'm sure it's worth a lot of money,” Anderson says. “You can pay thousands of dollars just for odd mutations of various snakes … There's people who just collect venomous snakes because they like to live dangerously, I guess. I'm sure there's a demand out there.”

Luring From Both Ends

Spider-tailed vipers may be the flashiest caudal lurers, but the behavior is so common it’s presumed other snakes probably use it, too — it just hasn’t been recorded yet. There are even several snakes that use so-called lingual luring, such as the mangrove saltmarsh, which catches fish by looping its tongue in a way that likely resembles fish food. But only one snake uses both its tail and its tongue to lure prey: the African puff adder.

This literal tongue-twister was discovered by Xavier Glaudas and Graham Alexander, two researchers at the University of the Witwatersrand in South Africa. They surgically implanted 86 puff adders with radio transmitters and set them loose near where they were captured in the Dinokeng Game Reserve.

For two years, they used fixed cameras to film the snakes, ending up with 193 continuous days of footage. They noticed snakes used their tails as lures, but the researchers observed that wasn't the only trick up their nonexistent sleeves. They were using their tongues, too. And they were using them for a totally different prey, suggesting they can tell their targets apart by species. This kind of behavioral segmentation had never been observed before, which the researchers say is odd given how common the puff adder is throughout Africa and is frequently kept in captivity.

“We observed puff adders lingual luring only in the presence of amphibians, indicating that they have the ability to discriminate between prey types,” the researchers wrote, adding, “[This] indicates that snakes may have higher cognitive abilities than those usually afforded to them.”

Schwenk, though, downplays suggestions that caudal luring means that snakes must necessarily be more clever than thought. “This requires sophisticated sensory processing, but not a lot in the way of cognition or higher level processing,” he says. “Don’t get me wrong — it’s amazing! But snakes are very unlikely to be aware of their prey as other thinking entities.”

In other words, snakes may have no conscious idea why they wiggle their tails about suggestively just that it helps them eat. The spider-tailed viper probably doesn’t realize what its tail resembles or that birds eat spiders. Nonetheless, studying caudal lures is a fascinating case study of the transformative powers of natural selection, as well as a reminder to look again if you ever happen to see a spider while hiking in western Iran.