Meet the Oil-Covered Pelicans, Symbols of the BP Oil Spill 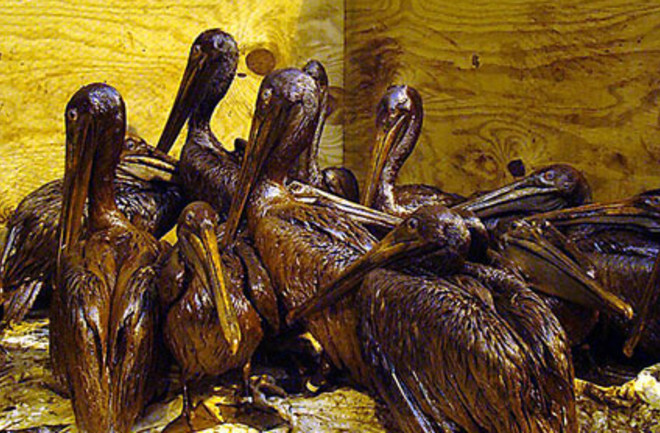 We have learned of top caps, top kills, junk shots, and dome plans. We have seen President Obama "furious," standing on the Louisiana shore. Last week, we saw pictures of the immediate victims of the BP oil spill, the Gulf marine life. Pictures that many believe will endure as symbols of the entire spill.Adding to the impact, the brown pelican is Louisiana's state bird, and was only recently removed from the endangered species list.

As a senior official of the US Fish and Wildlife Service, James Harris was too diplomatic to say if he thought the anger was justified, but, as a Louisiana native–from Pearl River, north of New Orleans, he pointed out forcefully why it was there, and how the first images of the oiled pelicans had intensified it. "I think it's possible that they might come to symbolise the whole disaster," he said. "For the people of Louisiana, the brown pelican is just as much a symbol of the state as the American eagle is for the nation as a whole, and to see the state emblem being threatened again and despoiled–people are very upset and angry about that." [The Independent]

But these images, including now famous photographs by AP Photographer Charlie Riedel, affect those who have never set foot in Louisiana.

“They’re definitely everlasting at this point,” said Denis Paquin, the deputy director of photography at The Associated Press. “That is the power of still photos. This is the start of it, in a sense. They have become that iconic yet horrible vision of what people had expected to see.... You will remember a bird completely covered in oil,” Mr. Paquin said. “In the eyes, you can see there’s something wrong. And you can study it. The eyes always tell a story.” [New York Times]

Some argue that the images took so long to surface because BP wanted them hidden, orchestrating any official spill tours as to avoid such sights.

"There is a lot of coverup for BP. They specifically informed us that they don't want these pictures of the dead animals. They know the ocean will wipe away most of the evidence. It's important to me that people know the truth about what's going on here," [a BP contract worker] said."The things I've seen: They just aren't right. All the life out here is just full of oil. I'm going to show you what BP never showed the President." [Daily News]

There are images of hope, such as this video of the most fortunate birds getting bathed before relocation to wildlife sanctuaries away from the spill. But some fear that even birds saved from danger will later attempt a return to their destroyed homes.

A BP spokesman denied any effort to conceal environmental damage, noting that BP has organized press tours to the spill zone. On Thursday, Times staff writer Tina Susman traveled with a group of three dozen wildlife rescuers operating from a houseboat 35 miles off Louisiana's shore, as they searched for oil-slicked birds. "This has the potential to be a huge ecological disaster," biologist Haven Barnhill told her. The search is brutally challenging: Temperatures soar into the 90s and the expanse covers tens of thousands of square miles of open water. Satellite images narrow the search field, but the effort still comes down to a biologist spotting a small, flailing victim through binoculars. [Los Angeles Times]

As of Friday morning, The Los Angeles Times reported 527 dead birds. Rescuers had brought in 85. Recent posts on the Gulf oil spill: 80beats: This Hurricane Season Looks Rough, And What If One Hits the Oil Spill? 80beats: We Did the Math: BP Oil Spill Is Now Worse Than the Exxon Valdez 80beats: “Top Kill” Operation Is Under Way in Attempt to Stop Gulf Oil Leak 80beats: Scientists Say Gulf Spill Is Way Worse Than Estimated. How’d We Get It So Wrong? 80beats: 5 Offshore Oil Hotspots Beyond the Gulf That Could Boom—Or Go Boom