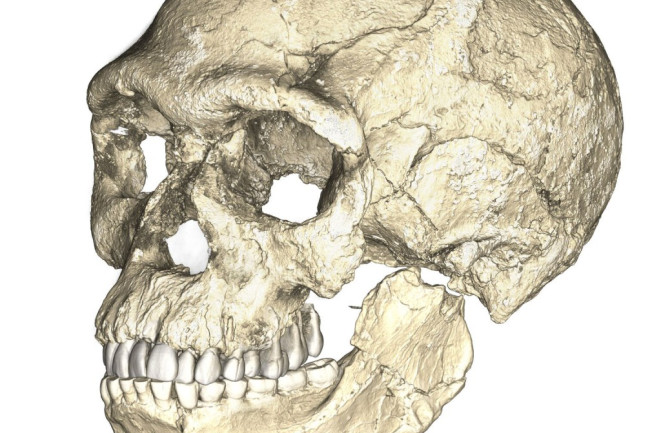 One of the earliest known members of Homo sapiens was this guy. The composite image, based on micro-CT scans of fossils from a site in Morocco, shows that the modern human face had already evolved by 300,000 years ago, smashing conventional thinking about our evolutionary timeframe. (Credit PhilippGunz, MPI EVA Leipzig) For decades, based on both the fossil record and, more recently, paleogenomic modeling, researchers have generally put the start date for Homo sapiens around 200,000 years ago. A trove of fossil and artefact finds from Morocco, however, pushes the age of our species back — way back. The new findings have implications far beyond how many candles to put on our collective birthday cake. In 2004, when researchers revisited the previously excavated early hominin site of Jebel Irhoud, about 60 miles outside of Marrakesh, it was a clean-up mission — at first. The mid-20th century mining operations that had turned up the first hominin bones had also destroyed much of the site, and the method in which some of those first finds had been collected made dating them with any confidence a difficult undertaking. The hope in reopening the site was to turn up some undisturbed rock layers that might help researchers establish a more conclusive age for the previously discovered fossils. But Jebel Irhoud was not finished sharing its secrets. The researchers found an area of the site that had been preserved, and discovered more fossils — from at least five individuals — plus numerous stone tools and other artifacts, some of which appeared to have been heated in a controlled fire. While the bones may get all the headlines, these bits of flint, apparently flaked off into the fire as tools were sharpened, are just as important: The material was perfect for dating using the thermoluminescence method. The results were startling: Most of the fossils and tools are about 300,000 years old. That's a date on the calendar about 100,000 years before any Homo sapiens should be out and about. "The dates were a big wow," said lead researcher Jean-Jacque Hublin, of the Max Plank Institute for Evolutionary Anthropology in Leipzig, at a Tuesday press briefing. "Early in the process we realized the site was much older than anyone could have imagined." The researchers at Jebel Irhoud had unearthed multiple individuals forming the earliest known population of Homo sapiens, 100,000 years older and more than 3,000 miles from the site that yielded the previous winner in the Who's Our Daddy? contest. Or, as Hublin said of the Jebel Irhoud fossils, "This material represents the very root of our species." The findings, published as two papers — one on the fossils and the other on associated stone tools and the dating methods involved — and an accompanying News & Viewsarticle, appear today in Nature. The Face of Us The newly described Jebel Irhoud hominins — at least three adults, one adolescent and a child the researchers believe was about 8 years old at time of death — have an intriguing mix of traits. Their faces were essentially ours: "It’s the face of people you could cross in the street today," says Hublin of the best preserved Jebel Irhoud partial skull. While some of the fossils had larger brow ridges, their facial feature measurements fall within the range of modern humans. Seen in profile, however, a key difference is apparent: although it had a volume "in the range of modern humans," according to Hublin, the Jebel Irhoud hominin braincase was lower and more elongated. Based on preserved features of the braincase (the part of the skull that encases, yep, the brain), the researchers believe the Moroccan hominins had a smaller cerebellum than modern humans, though not as small as that of Neanderthals. The cerebellum has been linked to fine motor skills as well as creativity; while the Jebel Irhoud hominins might have gone unnoticed walking down a city street today, it's likely that none of them would have had an Etsy shop. More seriously, however, finding early Homo sapiens with modern faces and teeth but more primitive braincases refines our understanding of the actual process of human evolution. “The story of our species in the last 300,000 years is the story of our brain’s evolution,” said Hublin, who added that mutations likely built up over that period, changing the brain's functional abilities along with its shape and giving the species cognitive advantages in everything from creating better technology to managing social complexities.

Despite the modern facial structure of the 300,000-year-old Jebel Irhoud hominin, the braincase (in blue) was more primitive, suggesting that the shape of the brain, and possibly cognitive ability, continued to evolve in Homo sapiens after the species was established. (Credit Philipp Gunz, MPI EVA Leipzig)Where The Zebra And The Antelope Play While Jebel Irhoud today is surrounded by desert, about 300,000 years ago it would have been more hospitable to hominins and their prey, said Shannon McPherron, lead author of today's paper dating the fossils and artifacts. When the hominins lived, the layer of the quarried hill in which their fossils were found would have been a cave providing shelter from the elements. Within that same area of the site were the bones of gazelles, zebra, wildebeest and the antelope-like hartebeest. Paleoclimate data points to the area being more humid than today, while the animal bones found suggest, said McPherron, "a landscape that is mainly open, with clumps of trees." "The overall picture one gets is of a hunting encampment, as they were moving across the area in search of subsistence," McPherron added. And there is strong evidence the hominins were indeed on the move. The flint they were using for their tools is not local. Analysis showed it came from a site more than 20 kilometers away, suggesting the hominins intentionally sought out quality tool-making material and carried it with them.

In addition to the hominin fossils, Jebel Irhoud is home to a number of stone tools, many made from non-local material which suggests a higher degree of intention than more primitive hominin tool-makers. (Credit Mohammed Kamal, MPI EVA Leipzig) “The thing that characterizes the Middle Stone Age from the time that came before is a shift from large, heavy-duty tools to an emphasis on producing lighter stone flakes that allowed increased efficiency in hunting. Along with an emphasis on pointed forms, there was an emphasis on quality materials,” McPherron explained, adding that the hominins' apparent ease of using controlled fire also speaks to their fairly advanced cognitive abilities for the time.

The Jebel Irhoud site first yielded hominin fossils in the 1960s; the latest find, remains of at least five individuals along with assorted artifacts, was reported today. (Credit Shannon McPherron, MPI EVA Leipzig)Don't Rock The Cradle Finding Homo sapiens setting up shop in Morocco 100,000 years before the next-oldest member of our species (from what's now Ethiopia) may excite our advanced cerebellums a little too much. So curb your imagination: Today's studies update the conventional timeline for human evolution but they do not establish a new homeland for our species. “We are not claiming that Morocco became the cradle of modern humankind,” Hublin said, adding that the broader conclusion from today's papers is that, by 300,000 years ago, a very early form of Homo sapiens had dispersed across Africa. That's across all of Africa. The partial skull and other fragments of a similar hominin, dated to about 259,000 years old, was previously found at the South African site of Florisbad. The Florisbad and Jebel Irhoud hominins may represent isolated populations of early Homo sapiens that dispersed from an as-yet-unknown "cradle" but eventually died out; Hublin's team believe that they are not likely to be directly ancestral to modern humans. Pushing back the start date of our species by at least 100,000 years with today's findings does, however, beg the question just how far back can we go? Hublin put the cap on finding Homo sapiens at 600,000 years — the estimated time, based on genetic models, of a split in the Homo lineage. One branch led to Homo sapiens, and the other to Neanderthals and Denisovans. "But what is happening between 400,000 and 600,000 years ago, we don’t know," Hublin said. You know what would be great? You know what would really help us sort it all out? Some ancient DNA from the Jebel Irhoud gang. After all, researchers successfully extracted and read genetic material from a much older Neanderthal ancestor found in Spain's Sima de los Huesos cave. Ah, but alas, Sima has natural climate control. The cooler, stable temperatures in the deep Pit of Bones protected ancient DNA from much of the degradation that typically destroys the fragile genetic code in a matter of millennia. "We did try to extract DNA but to date there is none," Hublin said of the Jebel Irhoud hominins. "It’s too old and too hot. This is very frustrating because I think there is little hope…we could have ancient DNA (in Africa)." Never say never, Jean-Jacques. Just in the opening years of the 21st century, scientists have made extraordinary advances in understanding more about human evolution, from the ability to extract and sequence ancient DNA to the discovery of entirely new species, including Homo floresiensis and H. naledi. We're slowly solving the puzzle of our family tree, one flint flake at a time.