The opah doesn't show the telltale signs of endotherms, but its adaptation gives the fish an edge over predators. 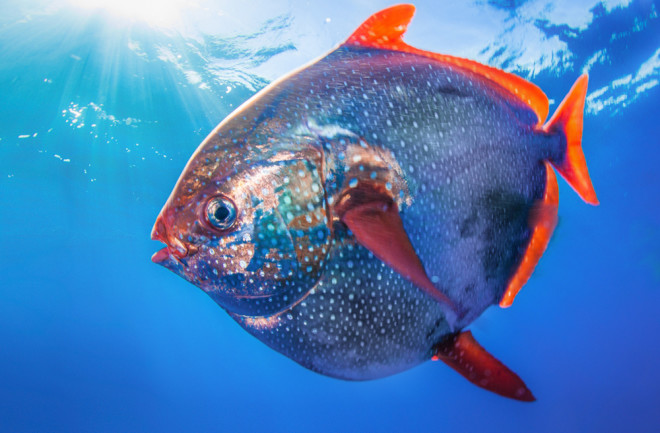 The opah’s adaptation gives it an advantage over other predators in cold depths. | Ralph Pace

The discovery of a warmblooded fish, announced in May in the journal Science, was no fisherman’s tale.

The opah, or moonfish (Lampris guttatus), with small fins relative to its big, disk-shaped body, seems an odd candidate for warmbloodedness: The deep-sea fish has lots of surface area for heat loss and definitely isn’t shaped for speed. But the opah generates heat by continually flapping those fins, says the study’s lead author, Nick Wegner, a fisheries biologist with the National Oceanic and Atmospheric Administration in La Jolla, Calif.

Fatty connective tissues around the opah’s muscles and fat layers around its organs — particularly the heart — help retain heat. Veins carrying warm blood from the heart to the gills interweave with arteries bringing colder, oxygen-rich blood from respiration. Heat exchange occurs between blood vessels in the gills, which are exposed to cold water. The opah’s ability to maintain its body slightly above ambient temperatures gives it advantages over the slower, colder prey it hunts. “Their warmer heart provides muscles with oxygen and nutrients. They swim faster and with more power,” says Wegner.

Tuna, marlin and great white sharks heat up certain areas — swimming muscles, parts of their viscera and the eye and brain — but these regional endotherms can stay at lower depths only for short periods and must rise to warmer waters, unlike the deep-dwelling opah.

No other known fish has such an adaptation, though Wegner notes the opah has a cousin, the southern opah (Lampris immaculatus), in the Southern Hemisphere. “We would expect it’s using the same strategy,” he says.