'Recording the sound of nature is my passion and life's work.' 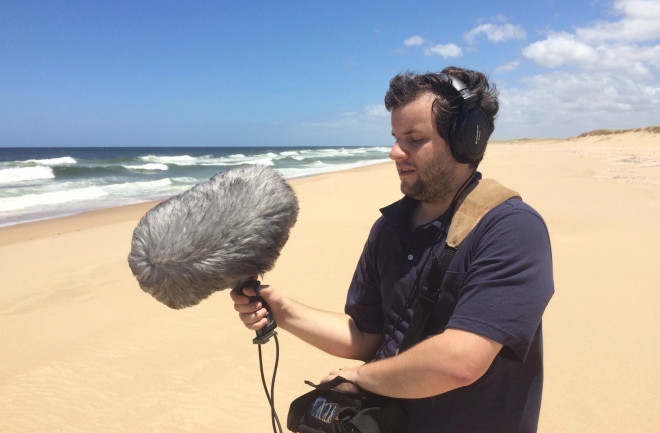 In April, Juan Pablo Culasso, a nature sound recordist and birder, released the first sonar map of the ecosystems of Uruguay. The map consists of a series of natural soundscapes recorded in some of the most iconic locations of the country. Culasso's goal was to show the world — through sound — a sample of the natural environments in South America that are disappearing at an alarming rate.

Culasso, 35, who was born without sight, says he chose the locations based on his memories from childhood. He wanted to revisit the places he traveled as a kid with his family. “For two months I traveled through my country, and in most places, there has been tremendous loss,” says Culasso. “It is very different to return as an adult, you have an idealized it in your memories, and a lot has changed. Nevertheless, I was very happy to be able to record these places and be able to publish them,” he added.

For the visually impaired outdoorsman, the process of recording is a mixture of experience, instinct, and training his collaborators to be more aware of sound. “Usually when I go to a new place, I find a local guide to help me,” says Culasso. “Most guides are used to showing birds to individuals interested in photographs, so they take to see the most colorful and beautiful birds, like tanagers and hummingbirds. For me, those birds don't have the most interesting songs.''

Culasso prefers the songs of the less colorful wrens and thrushes. For example, one of his favorite birds in Colombia is the Southern chestnut-breasted wren (Cyphorhinus thoracicu) known in Colombia as el cucarachero flautista, the flutist wren — not to be confused with Microceculus ustulatus (or more commonly known as the flutist wren).

Finding suitable locations can be very tricky, human noises such as traffic, airplanes, and electric scythes are everywhere. “My worst enemies are airplanes. It’s very hard to find a place where I will not record them,” says Culasso. Often he and his collaborators research airplane routes when scouting for locations. He also makes his guides use his equipment so they become aware of how they can affect recordings by loud breathing or by the clothes they wear. Culasso recommends and personally uses nylon clothes.

Editing can be a long and arduous process of listening to hours of recordings and choosing the best material for publication. “Usually, one hour of recordings will have 10 minutes I can use,” says Culasso. “Editing is a process of eliminating and deconstructing so that the sounds are as authentic as possible to the location. I aim for my work to be true to nature.”

Culasso excels in recording nature sounds, in part, for his memory and knack for absolute pitch, the rare ability to identify and recreate any musical note without a reference tone. However, he is the first to recognize that his ability to identify thousands of birds and their songs comes from “​​practice, hard work, and studying.”

He started learning bird sounds as a fun game when he was a kid, when his father would read him passages from an encyclopedia that came with recordings of several bird calls. Later, he started to play piano and gained the ability to train his ear — the notes, scales, chords, and arpeggios helped him to learn thousands of bird calls. Today he trains with his collection of thousands of records of birds from all over the world.

His abilities led him to win in 2013 the Nat Geo competition of Super Brains. The prize allowed him to dedicate himself to work as a speaker while recording the sounds of nature.

But is his work science, education, or art? Culasso has a very clear answer: “I consider my work as art because art is freedom to pursue what I love. If my work is used for science or education, it is a consequence of its quality.” He has contributed more than 240 recordings to the Macaulay Library, where it is archived and can be accessed by the public for scientific or educational purposes. Also, there are so few people recording nature in South America, that he is often contacted by TV and film crews so they can use his work in their productions.

“Recording the sound of nature is my passion and lifework,” says Culasso, whose career started in Brazil, where he learned to record in one of his favorite ecosystems, the Atlantic forest. He soon realized that in a dense forest “it is very hard to see any birds, which can frustrate many naturalists/birdwatchers. Listening helps us understand what surrounds us”.

Culasso hopes that his work will help to highlight the “invisible sounds, the hidden sounds that we often ignore.” For example in Colombia, where he moved to two weeks before the first COVID-19 lockdowns were enforced, “everyone in Bogota was shocked to hear so many birds singing. I tell everybody that the birds have always been signing! The noise pollution didn’t allow us to hear them,” he says.

The Uruguayan is currently working on developing the first avi-tourism route for people with visual disabilities. The project was chosen by the Natural Wealth Award 2020-2021, and has funding from the Colombian government and USAID. It focuses on training local bird guides in Santiago de Cali, Colombia, on accessibility and inclusion, with the goal of allowing people with visual disabilities to experience nature in a new and exciting way. The route, currently in its pilot stage, should be running by September 2021 and aims to highlight the sounds of the most representative birds of the Andean region.

Culasso's goal is to continue to travel, record, and publish new works. His next projects will focus on the birds of Colombia. After all, Culasso argues, Colombia “is the country of birds.” Beyond that, he hopes to replicate his avi-tourism route for people with visual disabilities in other places, too.

But ultimately, Culasso says, his dream is to “someday, visit and record in Africa.''