From clay-chomping gorillas to reindeer that munch on hallucinogenic mushrooms. 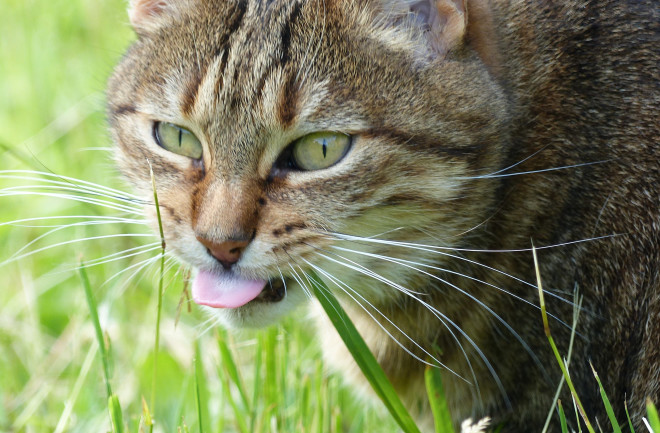 Humans aren't the only animals that take medication to treat pain, prevent suffering, alter our minds, or just to make ourselves feel better. Caterpillars, parrots, lemurs, dolphins and countless other species, too, take masterful advantage of the chemicals available to them in the wild — in plants, other animals, fungi and the soil itself. Basically, they treat the natural world as though it were a living medicine cabinet.

This type of self-medicating behavior is called "zoopharmacognosy," the subject of a relatively new field of biology formalized in 1987. Yes, the word itself — much like a cat chewing on grass — is a bit of a mouthful, but it comes from Greek roots that translate to "animal," "medicine," and "to know."

The ways that animals use medicine can be categorized according to that medicine's mode of delivery. Is it consumed, like the leaves of Aspilia plants, which are swilled in the mouths of chimpanzees to release the toxins that kill parasitic gut worms? Or is it applied topically, like the formic acid birds use to treat blood-sucking bird lice? (Over 200 species of bird are known to roll over and aggravate ant nests to pester the ants into spraying them with the alleviating acid.) It might be less direct, like the conifer resin that wood ants use to line their nests, which has anti-fungal and antibacterial qualities to keep the colony free from infection.

Zoopharmacognosy can also be categorized as either preventative or therapeutic. A preventative use of medication is seen in tropical parrots, bats, and sifakas, who consume dirt and clay packed with an array of salutary minerals and micronutrients: calcium, magnesium, zinc and more. A therapeutic use of medication is cats and dogs consuming grass as an emetic (a vomit-inducing substance) to relieve gut trouble, though there are other reasons for grass-consumption. And brown bears that make a paste from spit and chewed oshá root use it to both soothe and prevent insect bites.

For centuries — millennia, even — humans have observed the use of medicines by animals and emulated them. After observing brown bears and their compounding of oshá root, indigenous Navajo people co-opted the formula for their own devices, using the root to treat upset bellies. The name of the treatment? Bear medicine.

In another example, shamans of the Sami people used the hallucinogenic mushroom Amanita muscariaas as part of a ritual while herding reindeer across Finland and Siberia. The idea was to enter a prophetic trance and commune with their reindeer who, too, would dig up and consume the mushroom.

Other lessons have been learned, too. Take Capuchin monkeys, who use citronella and citrus to anoint and protect themselves against insects. That particular herbal practice has also been used by people in China, India, and Sri Lanka, before the modern advent of commercial insect repellents. And it's not just humans learning from the animals, either. In a literal case of "monkey see, monkey do," a research expedition in the rainforests of Costa Rica had their bottle of insect repellent snatched by a capuchin monkey, who proceeded to unscrew the cap and apply the solution all over his fur.

Of course, Homo sapiens have pharmacies for our ailments and afflictions — one-stop shops that are stocked with medicines of all kinds. But what might pharmacies look like if they weren't run by humans? Here's a few other examples of treatments used by self-medicating animals, organized much like they would be at your local pharmacy:

While we might only seek out insect repellent before going camping, or antifungals after an especially humid week. But parasites like these are everyday — and often lethal — concerns for other animals. Given the preponderance of parasites, these are perhaps the most common type of zoopharmacognostic medicine.

Looking at chimpanzees alone, individuals sick with intestinal parasites treat themselves with anti-microbial piths, the spongy, white layer between the fruit and the peel in oranges and other citrus fruits. Worm-infected chimps also roll up and eat the fluffy leaves of the Aspilia plant, which acts as a sort of bottlebrush roughage, collecting and deporting worms from the gastrointestinal tract.

Geophagy, or soil-eating, is a way that some animals recoup lost vitamins and minerals in their diet. But chowing down on dirt can provide other benefits, too. Plants often contain toxic defensive chemicals that can accumulate and harm the animals that eat them, which primates offset by eating soil. Changing diets suddenly, too, can cause stomach upset and diarrhea — a problem that mountain gorillas and rhesus monkeys resolve by consuming clay.

Whether they're used as aphrodisiacs or birth-control — or even to help prepare for pregnancy — animals rely on plant and animal-based medication at every stage of the reproductive journey. Male great bustards, the heaviest flying bird, are known to seek out blister beetles before mating season. These toxic beetles can be lethal, but in the proper dose, they have been found to reduce gut bacteria that cause STDs and other diseases.

Primates are particularly adept at family planning. In Brazil, female woolly monkeys eat leaves to increase their levels of estrogen and progesterone, effectively using them as contraception or, when they’re ready, increasing fertility. Sifakas — neither monkey nor ape but a prosimian from Madagascar — increase their consumption of tannin-rich plants while pregnant or breast-feeding. Tannins are used in veterinary medicine to slow bleeding and as an anti-abortive agent. Further, their consumption is associated with weight gain and milk-secretion, which benefits both sifaka mothers and mothers-to-be. And a study on red colobus monkeys found that munching on the toxic leaves of Millettia dura, filled with the hormones estradiol and cortisol, appears to reduce prosocial grooming behavior and increase acts of aggression and sex.

The topic of animals taking mind-altering drugs is an article unto itself: dolphins tripping on pufferfish, mandrills ingesting hallucinogenic roots or the classic cats on catnip. But animals consume other more common drugs, too. Elephants and monkeys get drunk on purpose, which can wreck just as much damage in their lives as it does in ours — like inebriated elephants destroying crops and drunken monkeys abandoning their children.

Psychopharmacologist Ronald Siegel sums up the rampant drug use in the animal kingdom in his book, Intoxication, like this: “[The] pursuit of intoxication with drugs is a primary motivational force in the behavior of organisms.”