Meet Phallostethus cuulong, The Fish With Elaborate, Multi-Part Genitals On Its Chin 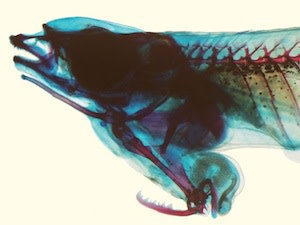 Phallostethus cuulong was swimming quietly in Vietnam's Mekong River, minding its own business, when humans discovered the fish in 2009. And now that researchers have described P. cuulong

[pdf], we can't help violating its privacy by gazing unabashed at its most interesting feature. That feature sits on the throat in the form of a priapium, an organ with as many parts as a Swiss Army knife, most of which contribute to a single function: making as many babies as possible. P. cuulong is the most recently discovered species of 22 known priapiumfish, a family whose males have replaced their penises with muscular priapia, formed from the modified bones of the pectoral and pelvic fins. In addition to an anal opening and a genital pore, the priapium includes a rod and a serrated hook for grabbing a female’s head to keep her throat, and its oviduct opening, close to the genital pore. A firm grip lets the priapium fertilize the female internally without losing too many sperm. Although it sounds uncomfortable, this mating method is actually very effective: Researchers have found female priapiumfish with full oviducts, ensuring that just about all of their eggs get fertilized. Gives a whole new meaning to the term “necking,” doesn’t it? [via Running Ponies