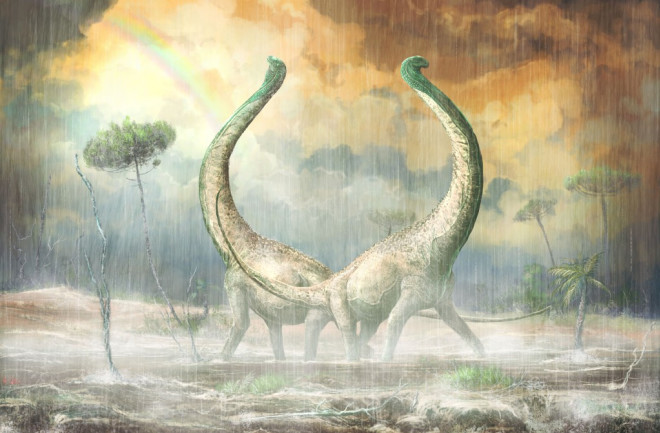 "Its name isn't the only big thing about Mnyamawamtuka moyowamkia, a new titanosaur from Tanzania rendered here with a whiff of whimsical romance, just in time for Valentine's Day ("I

Hailing from East Africa, the newly described giant, plant-eating dinosaur Mnyamawamtuka moyowamkia lived around 100-110 million years ago, during the middle of the Cretaceous. The animal, a member of the titanosaur lineage, is helping paleontologists understand how, where and when the mightiest of land animals evolved.

Sauropodomorphs are some of the most common and geographically diversely dinosaurs in the fossil record, and their shape — small head, long neck, big torso, elephant-like limbs and a long tail — is one of the most iconic body plans, instantly recognizable even to people who don’t care about dinosaurs (perish the thought!).

The basic body plan of sauropodomorphs, including titanosaurs, is so recognizable that companies such as Sinclair Oil Corporation have used it in logos, where an instant read is everything. Yes, I know the Sinclair mascot is depicted as a tail-dragger, now known to be anatomically incorrect. Complain to them, not me, about it. (Credit: Sinclair Oil Corporation)

The basic body plan of sauropodomorphs, including titanosaurs, is so recognizable that companies such as Sinclair Oil Corporation have used it in logos, where an instant read is everything. Yes, I know the Sinclair mascot is depicted as a tail-dragger, now known to be anatomically incorrect. Complain to them, not me, about it. (Credit: Sinclair Oil Corporation)

Among the sauropodomorphs, titanosaurs were Earth’s largest land animals, reaching their apex, so to speak, in the Late Cretaceous. But the full story of how they evolved to stand more than 60 feet tall — and weigh in at an estimated 100 tons-plus — has remained murky due to scant fossil evidence from their earlier days.

Early titano-finds are few and far between, and most of the titanosaurs from the middle of the Cretaceous, about 100 million years ago, have been found in South America. As paleontologists focus on rocks of that age elsewhere in the world, however, they’re finding more and more evidence that these earlier animals were as widely dispersed as their descendants.

The continent of Africa in particular is emerging as one of the most promising landmasses for learning the full titanosaur story. Last year, for example, Egyptian paleontologists announced the new titanosaur Mansourasaurus, found in the country’s Western Desert region. Other titanosaurs have been found in Tanzania, in the same rock formation as Mnyamawamtuka, as well as in Malawi, just to the southwest.

It makes sense that paleontologists would find early titanosaurs throughout both South America and Africa, since the landmasses were once side-by-side as part of the supercontinent Gondwana. Although Gondwana broke up during the Jurassic (and tens of millions of years before the Cretaceous), similarities in animal and plant life across its disparate parts persist, even today.

Now, every new titanosaur found in Africa expands not just the fossil record of that continent, but the story of the lineage’s evolution.

“This discovery adds a critical piece to the puzzle of early titanosaurian evolution, as Mnyamawamtuka is one of the better preserved specimens from this part of their family tree,” says Ohio University paleontologist Patrick O’Connor, a co-author of the new paper. “Titanosaurians from this part of the Southern Hemisphere have been a bit more challenging to discover and excavate — but nothing that climbing ropes and enthusiastic field teams cannot overcome.”

Although titanosaurs include the largest known land animals, the Mnyamawamtuka specimen isn’t going to break any size records.

“The skeleton of Mnyamawamtuka is actually small,” said Eric Gorscak, the other co-author of the study and a paleontologist at both Midwestern University and Chicago’s Field Museum. The animal likely weighed only about a ton, and if you were to stand next to it, you’d probably be about eye level with its hips. That doesn’t mean the species in general was short stuff.

“Based on some of the bones, this specimen of Mnyamawamtuka is of a juvenile and would have grown to be much larger,” Gorscak added. “We’re just not sure how much larger until we find more skeletons of this dinosaur.”

The partial skeleton of the new titanosaur was unearthed during a series of digs more than a decade ago in southwestern Tanzania; it’s not unusual for so much time to pass between discovery and formal classification because fossils need to be prepared — freed from the surrounding rock — and thoroughly analyzed before paleontologists can determine what they represent.

Anatomy of a “Beast”

The fossil finds included elements from the neck, tail, torso and limbs, providing enough anatomical detail for the researchers to place Mnyamawamtuka in or near the very base of the Lithostrotia lineage, which became the most significant line of titanosaurs in the Late Cretaceous.

Among the unusual anatomical traits of the new dinosaur: a small sternal plate. Most titanosaurs have large sternal plates — the bone is the dinosaur version of a human sternum — which likely played a role in how they got so huge by the Late Cretaceous.

“Part of the small size could be due to the juvenile life stage,” said Gorscak. “It is not unusual for different body parts to develop and grow at different rates until the animal is fully mature.”

Although not a complete specimen, the fossils found provided paleontologists with a wealth of information about the enormous animal. (Credit: Mark Witton/https://doi.org/10.1371/journal.pone.0211412)

Although not a complete specimen, the fossils found provided paleontologists with a wealth of information about the enormous animal. (Credit: Mark Witton/https://doi.org/10.1371/journal.pone.0211412)

What’s In A Name?

If you’re wondering about its name, it comes from Kiswahili, the language spoken in the region (Kiswahili translates as “the language of the Swahili people;” it’s a more accurate word for the language sometimes called Swahili).

Its genus, Mnyamawamtuka, means “beast of the Mtuka” (the river drainage system where the fossils were found). The species name, moyowamkia, translates as “heart of the tail,” a nod to its unusually shaped tail vertebrae, which have a heart shape when viewed from a certain angle.

No word on whether the whole heart-shaped piece of tail thing is a tie-in to the pre-Valentine’s Day timing of the paper’s publication, but based on the artist’s romance-ready rendering of the animals, I’m going to guess it’s more than pure coincidence.

The open-access study appears today in PLOS One.