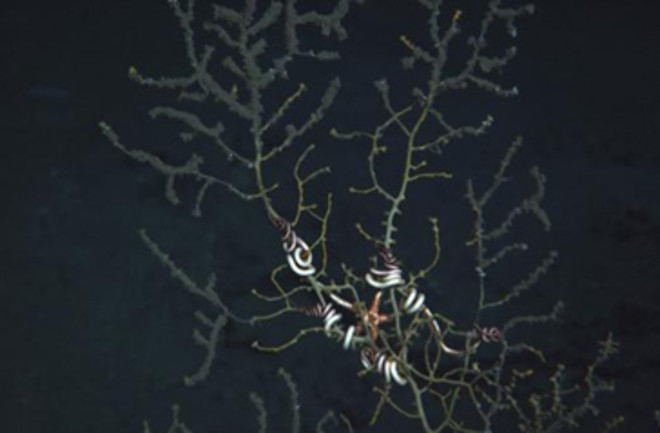 The Deepwater Horizon spill in the Gulf of Mexico brought us those gut-wrenching pictures of pelicans covered in oil, but up to now there have been mercifully few reports of the disaster causing specific large-scale damage to the Gulf environment. That may be beginning to change: This week oceanographers report a vast swath of coral about seven miles southwest of the Deepwater Horizon site that are coated in brownish-black gunk and dying off. The team says the evidence points to the oil spill as the culprit. The scientists sailed aboard the National Oceanic and Atmospheric Administration research boat

Ronald H. Brown, and used remotely operated submersibles to survey the seafloor and find this devastation.

"The coral were either dead or dying, and in some cases they were simply exposed skeletons," said team member Timothy Shank of Woods Hole Oceanographic Institution. "I've never seen that before. And when we tried to take samples of the coral, this black—I don't know how to describe it—black, fluffylike substance fell off of them." [National Geographic]

of Penn State, the project's head scientist, said that the goo coating these corals 4,500 feet below the sea surface is most likely not the actual oil from the BP spill

Instead, he suggests that it is detritus from the water that simply accumulated on the corals as they died. The researchers will be analysing samples of the brown material, as well as sediment samples and tissues from the coral and other animals, to look for significant levels of oil or dispersant. [Nature]

At the moment, Fisher's team can't be absolutely sure that Deepwater Horizon was the culprit in this coral die-off; those further tests may prove the case for sure. But the corals dying off all together—and so close to the oil spill—makes the BP oil spill the obvious main suspect. Says NOAA administrator Jane Lubchenco:

“Given the toxic nature of oil and the unprecedented amount of oil spilled, it would be surprising if we did not find damage,” she said in a statement. “This is precisely why we continue to actively monitor and evaluate the impact of the spill in the gulf. We are determined to hold the responsible parties accountable for the damage done to the environment,” she added. [The New York Times]