Once critically endangered, Vancouver Island marmots are now teaching each other how to recover. 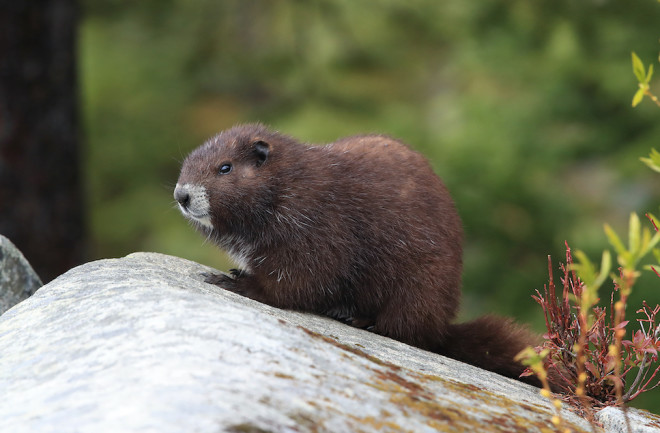 Hiking across Vancouver Island’s Mount Washington, marmot keeper Jordyn Alger is perplexed. “I’ve never not seen a marmot on a walk here before,” she says. Despite her radio-tracking equipment, she’s come up short this hot July afternoon. But as Alger speaks, as if to reward her optimism, a tagged wild marmot appears on a log, eyeing us.

The consistency of her sightings reveals an exceptionally effective program of rehabilitation, bringing critically endangered Vancouver Island marmots (Marmota vancouverensis) back from near extinction.

The species is distinguished from the other five North American marmot species — and 14 more worldwide — by its dark brown fur. Landscape changes, often linked to trees encroaching on their preferred open spaces, on Vancouver Island throughout the 20th century fragmented the marmots’ mountain habitat, leaving populations isolated. By 2003, there were fewer than 30 left in the wild, and they were so sparsely distributed that many couldn’t find mates.

Experts hoped they could breed marmots in captivity, where the animals could be raised safe and healthy before being released into the wild. But captive breeding alone wasn’t enough to bring the marmots back from the brink of extinction: The animals struggled to integrate into their natural mountain habitats.

“These captive-bred marmots have so many challenges when we release them into the wild,” explains Cheyney Jackson, field coordinator at the Marmot Recovery Foundation. With no experience of the outside world, the captive-bred marmots didn’t know how to dig hibernation burrows, how far to roam or how to respond to predators. “Everything is new for them,” Jackson says. They have the right instincts, but need help to remember them. So the scientists founded the world’s first and only marmot school.

By introducing the captive-bred marmots into an existing marmot colony, the scientists could get them the education they would need at the hands of marmots who had lived their lives in the wild. The tough, wild-born marmots would teach their softer cousins the ways of the mountainside. After a year, the graduating students would be transplanted to a new site to repopulate abandoned or struggling colonies.

The marmot watching us from its log is right to be suspicious: By the end of the summer, it will be recaptured and relocated elsewhere. The translocations have been remarkably successful — not only have the six bolstered colonies survived, but they’ve spun off another four on their own. There are now upwards of 200 of these marmots in the wild.

The success of the program is drawing attention from other breeding programs for endangered species, and although there’s no tiger school in the works yet, it’s easy to see how any captive-bred animal could benefit from a little education.