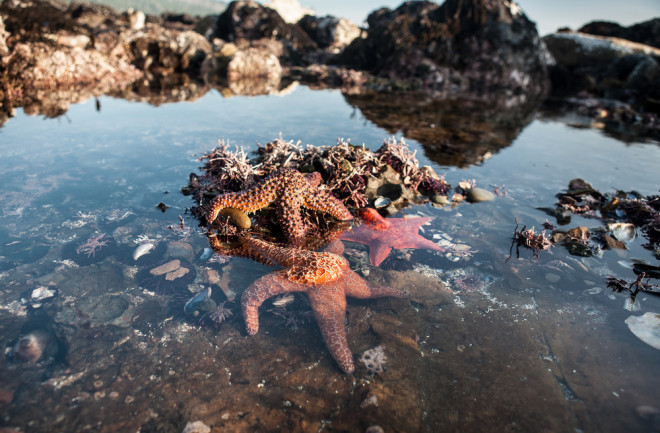 Tide pools reveal surprising influence of marine life on seawater chemistry. Photo Credit: Ethan Daniels/Shutterstock One of the many consequences of rising atmospheric carbon dioxide is ocean acidification—the lowering of seawater pH as CO2 chemically reacts with dissolved ions in seawater. Scientists have found that more acidic waters are dangerous to many species, especially structure-builders like corals, and thus the potential drop in pH predicted in the future would be devastating to marine habitats. So it's not surprising that many scientists are actively looking for ways to mitigate this for coastal ecosystems, where losses could be especially impactful ecologically and economically. But the answer may be right in front of them: marine life is already able to buffer drops in pH, finds new research in Scientific Reports. "Our research shows that marine life plays a substantial role in controlling the level of acidity, or pH, along the coast just by breathing or photosynthesizing," said Nyssa Silbiger, an assistant professor in the Department of Biology at California State University, Northridge and lead author on the new study. "Marine plants and algae increase pH in the seawater right next to them, making it more basic, while animals make it more acidic." "This is an exciting result because it shows that marine life not only respond to changes in pH, but that they actually play a major part in controlling it," Silbiger said. All Aboard the Bio Bus Most work on ocean acidification has tested how organisms fare when exposed to the magnitude of pH shift predicted by models. But those predictions are for average changes to seawater worldwide. "It's all based on open ocean, stable conditions," Silbiger explained. "But coastal ecosystems are so different." In her prior work on coral reefs, she observed the pH of seawater changing by an order of magnitude over distances smaller than a football field, for example. So to examine how these systems are affected by swings in pH, Silbiger (then a postdoc at University of California, Irvine) took to the Pacific coast with UC Irvine PhD student Piper Wallingford aboard the Biology Bus—a 2002 Eurovan Winnebago named Becky donated by GoWesty! which the team outfitted for research. The pair traveled 1,300 miles from San Diego, California to the Olympic Coast of Washington, stopping to conduct fieldwork for their projects along the way. "We lived for two months in this van, road-tripping from tide pool to tide pool," Silbiger said. "It was great because we'd just pull up to the beach to conduct 24 hour experiments, and in between time points, we'd sit in the back and eat French toast in the van."

Wallingford (left), Silbiger (right) and Becky the Biology Bus. Photo Credit: GoWesty Shoreline Laboratories Instead of setting up tightly controlled lab experiments to see how communities respond to acidity, Silbiger took advantage of the isolated-yet-not nature of tide pools. "You basically have this little individual ecosystem that you can work with and manipulate," she explained. At low tide, each pool is essentially separated from the rest of the ocean, which means any changes are quantifiable and "due to the organisms or the physics that are happening right then inside that tide pool." Silbiger collected detailed data on 57 tide pools across four sites along the Pacific coast. For each pool, she measured physical details like the size and depth of the pool and how near it sat to the water's edge. She also carefully cataloged the biological community in the pool, from algae to fish, categorizing them as producers—organisms able to take sunlight and carbon dioxide to create the building blocks of life, increasing pH in the process—and consumers, whose only decrease pH as they respire. And then, hourly water samples were taken to track the pools' chemical traits, including pH.

Around the clock fieldwork was grueling, said Silbiger. Photo Credit: Nyssa Silbiger Silbiger was surprised that the life in the pool was the most important determinant of its acidity. While physical variables controlled the general patterns of rise and fall, the amount a pool changed was due to the critters. "The biology alone is driving that variability," she explained. The more algae and other producers in the pool, the greater the difference between daytime high pHs, when photosynthesis was at its maximum, and nighttime low pH, when no photosynthesis was occuring. But that wasn't the only surprise. When Silbiger examined the variability between pools at each site, she found that pools with extremely variable acidity, which had some of the most corrosive, lowest pHs at night, actually had more structure-building, calcifying organisms like mussels. She deduced that these animals are actually taking advantage of the incredible swings in pH created by their pool's producers to grow during the day and resist erosion at night. "This cycle is called a “biophysical feedback loop”, where the organisms and the environment both influence each other," she explained. "Animals that are growing shells or calcified skeleton can grow faster if they are in a location with lots of marine plants or algae." Natural Buffers The work opens up the intriguing possibility of cultivating certain species to reduce impacts. "Algae might potentially be a buffer to ocean acidification on a very local scale," said Silbiger. "There are studies going on where people are taking things like kelp and putting them offshore of oyster hatcheries and other farms like that to see if they can change the offshore chemistry just by adding these photosynthesizers." Similarly, we might be able to cultivate seagrass beds inshore of coral reefs to buffer corrosive waters without exposing corals to their algal nemeses. But mostly, the study shows just how important coastal conservation efforts are. "Our research shows that preserving locations with lots of marine plants and algae could locally buffer, or slow down, some of the negative effects of ocean acidification," says Silbiger. "This means that if humans alter the composition of marine life along our coastlines via climate change or coastal development, it will change local pH conditions and could worsen the effects of global ocean acidification." "Ongoing coastal protection is thus necessary in addition to global reductions in CO2 emissions, which is the number one most important way to protect our coastal resources," she stated.