Play a fun tablet game, learn about coral reefs and help NASA scientists build an algorithm that will map out the world's coral! 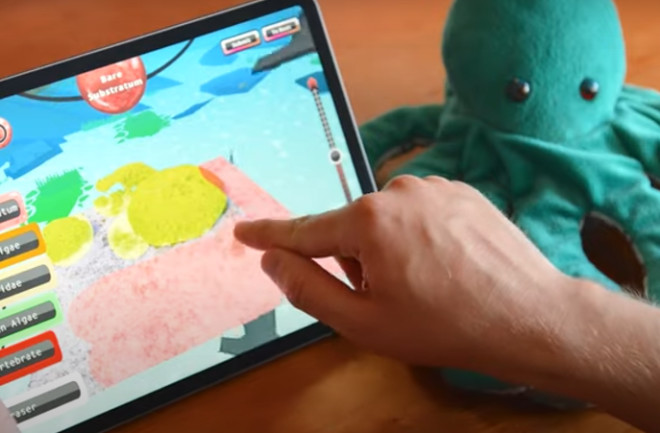 “Our coral reefs are in danger … we need your help.” When new players log on to NASA’s NeMO-Net, they’re greeted with a video message from oceanographer Sylvia Earle. “Your mission is to take command of a research vessel, and travel the world collecting data on the ocean,” she says.

Warming temperatures, rising sea levels and other disturbances have already destroyed or damaged most coral reefs around the world, and experts predict that 70 to 90 percent of the live coral today will be lost by 2050 if climate change isn’t kept in check. These ecosystems are more than just beautiful places — coral reefs are important for humans, providing food through fisheries, income through tourism and coastal protection to hundreds of millions of people worldwide.

It’s tricky for scientists to track just how much coral is being lost, since reefs are spread all over the world and hidden underwater. But recent advances in satellite technology have made it easy for scientists to collect photos of many of the world’s reefs, which they can use to learn about things like coral abundance and diversity, and how those important measures of reef health are changing over time.

Once they’ve digitized enough photos, scientists will be able to use a computer algorithm to do the task automatically, offering unprecedented insights into coral reef health around the world.

Scientists at NASA created the NeMO-Net game to let players of all ages help out with the task. Looking at satellite photos of reefs from all around the world, players trace corals and other things on the ocean-floor in three dimensions, using their in-game paintbrushes to color-code what they see. NASA’s algorithms will use this information about what’s what in these photos to learn how to identify other photos automatically. Along the way, volunteers playing the game learn about the reefs themselves, like how to identify different types of corals.

When Alan Li, a NASA research scientist and co-investigator on the NeMO-Net project, started at NASA in 2016, he and his colleagues were using what he calls “old” machine learning methods to analyze their coral reef data. “We quickly realized that we had to scale up,” Li says. “At the time, neural networks” — a new kind of machine learning technique — “were becoming much more popular.”

“On one hand, we had so much [coral reef] satellite data that no [single] human could ever go through it, and on the other, we wanted to try something new — the cutting edge of what machine learning was doing in other fields,” he says. With new tech, they could automate the classification of their satellite data. But before they could get started, they’d have to classify thousands of coral reef photos manually in order to train their algorithm. And they needed help to do it. In 2017, NeMO-Net was born.

NeMO-Net uses real photos taken from above the water to study the coral below. Project leader Ved Chirayath invented a new way to generate a clear image through the waves of what's below, called fluid lensing. (Credit: NeMO-Net)

While NASA’s computer scientists develop new ways to deal with giant satellite datasets, the coral reefs themselves are at the  heart of NeMO-Net. “The biologists are really concerned about how the reefs are changing,” Li says. “With climate change, human activity, pollution, these reefs are undergoing tremendous stresses. They’re changing much faster than they used to.”

Coral reef biologists want to know what makes some reefs resilient while others don’t survive. NeMO-Net has also teamed up with the National Oceanic and Atmospheric Administration to see how they can apply what they’ve learned in tangible ways. That means giving information to coral reef managers and scientists doing on-the-ground (well, under-the-water) experiments to test ways to save or even rebuild reefs. “They’re looking at what they can do to stem the tide,” Li says.

The project's biggest successes to date have been in mobilizing volunteers to take action and in improvements to the image-classification algorithms. Over 43,300 citizen scientists have downloaded the game, and together they've classified more than 76,000 images.

“When people play the game, I just say, enjoy yourself,” Li says. “Don’t worry about getting 100 percent accuracy, the experience is more important. Learn as much as you can.”

But soon, all of those images will begin enabling the real goal: computer algorithms that can sift through tens of thousands of images. It will exponentially accelerate the pace of coral-saving research. And it will all be thanks to citizen scientists.

NeMO-Net is a SciStarter Affiliate, which means you can get credit on your Dashboard for participating. Visit the NeMO-Net page on SciStarter and hit “Visit” to get started!