Mankind Leaves Its Mark on Earth

Earth's surface is riddled with evidence of human activity, visible even from space.

Let's say you're an alien life form who is seeing planet Earth for the first time from a vantage point of about 440 miles from its surface. You'd see great bodies of water, mountains, forests and deserts. But dotted throughout this foreign landscape, almost like tiny pock marks, you'd see something else: Telltale signs that some other force is at work.

That "force" is, of course, mankind. Humans have collectively reshaped the planet, leaving behind landscapes that stand in contrast to their natural surroundings.

Here, we've collected a handful of those blemishes, captured by NASA's Landsat orbiters, to give you a sense of what might catch an extraterrestrial visitor's eye. 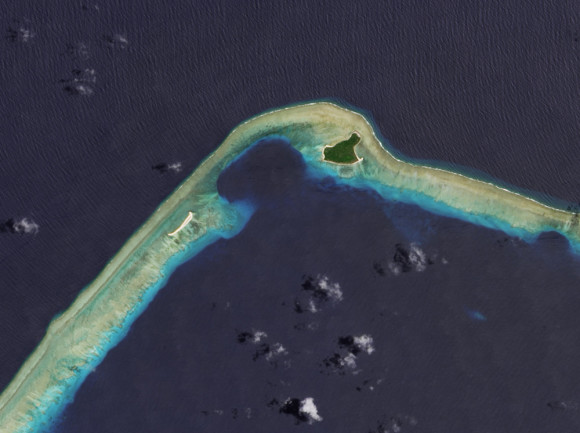 On March 1, 1954, the U.S. Army detonated a thermonuclear bomb on Bikini Atoll in the Marshall Islands. The resulting explosion took many by surprise.

The bomb was expected to produce 4 to 6 megatons of explosive force. Instead, it produced 15 megatons — 1,000 times stronger than the bomb dropped on Hiroshima. The mushroom cloud of superheated air, water and fallout rose almost 130,000 feet into the sky, and spread to four continents.

This image, captured in 2013, is the bomb's lasting legacy. The notch carved out of the island next to the green clump of vegetation is the crater carved out by the detonation. It's 1.2 miles across and 260 feet deep. 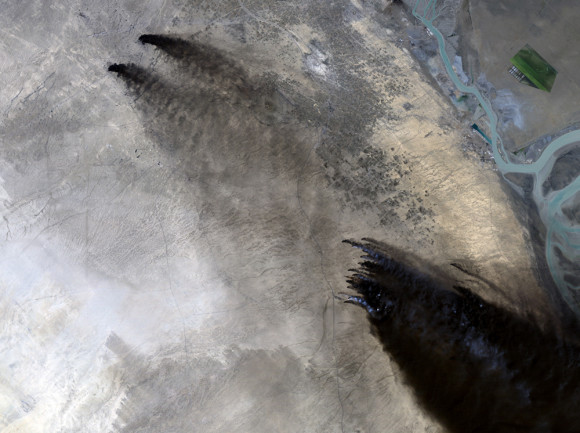 In 1991 Landsat captured the path of destruction left behind by Iraqi forces as they withdrew from Kuwait. Troops set fire to more than 650 oil wells, blackening the skies with thick smoke. It's estimated that 1.5 billion barrels of oil were released into the environmentthrough the fiery the process.

Although this wasn't a permanent blemish on Earth, anyone observing from above would have seen this flare-up. 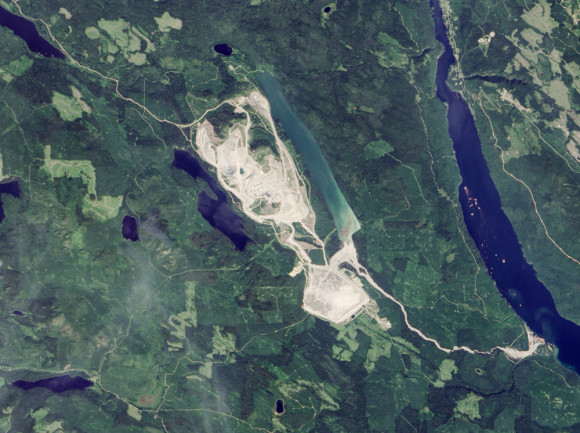 On August 4, 2014, a dam at the Mount Polley Mine in British Columbia breached and sent contaminated wastewater and metal-laden sand into nearby lakes.

By August 5, when this photo was taken, the wastewater retention basin had completely drained, leaving a scar of brown sediment. Meanwhile, silty, polluted water spilled into the adjacent lake and stream. Residents living nearby were barred from using their water.

In all, the breach released enough water and sand to fill 4,000 Olympic-sized swimming pools. 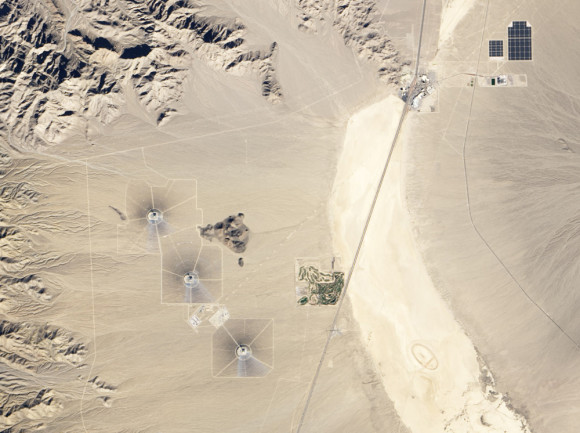 The plant, which produces enough electricity to power more than 140,000 homes, is considered the largest solar thermal power system in the world. It works by heating water to nearly 1,000 degrees Fahrenheit, and using that superheated steam to spin turbines to generate electricity.

This particular corner of the planet sees 330 to 350 days of sunshine a year. Interestingly, amid this sea of sun and scorched earth, you can still find a golf course just east of the power plant. 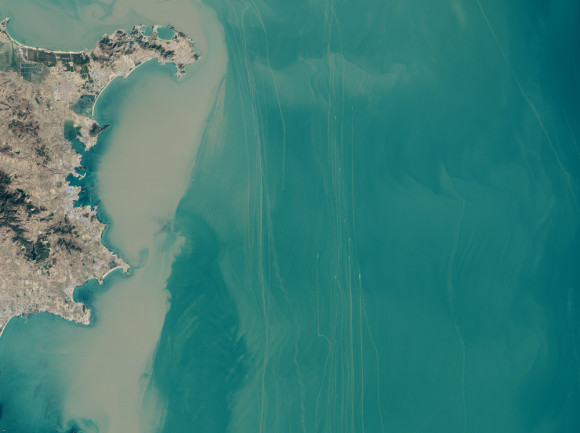 Massive ocean liners, just like airplanes, leave a well-defined trail in their wake. The small white specks in the photograph are likely cargo ships, with a few fishing and ferry boats mixed in. As these ships travel through the sea, they kick up long, brown sediment plumes.

These sediment trails were created by ships traveling off the coast of China's Shandong Peninsula. Shipping lanes form a highway of sorts — northbound lanes to the right and southbound to the left — between two Chinese ports that are among the busiest in the world. 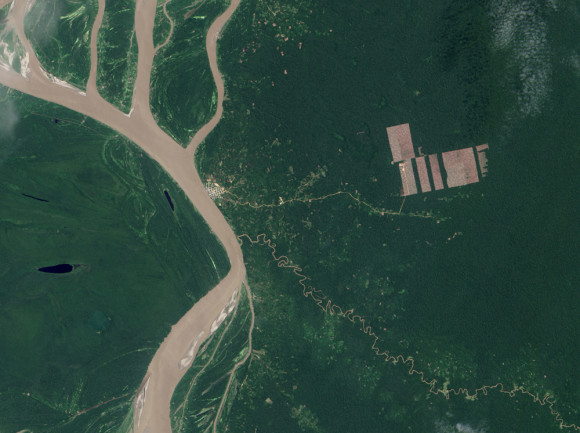 In 2013, Landsat captured a man-made bald spot within the lush tropical forests of Peru's Loreto region.

Just a year prior to snapping this photograph, those rectangular expanses of exposed earth didn't exist. By observing a series of photographs in this area, researchers estimated that roughly 247 acres of forest were cleared per week. 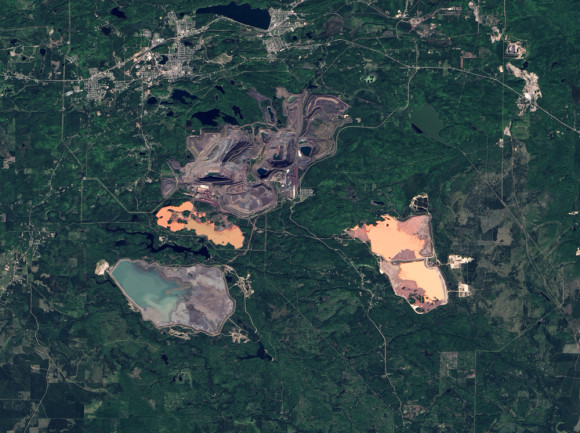 Exposed rock and dirt make the mines appear gray amidst the green vegetation. The orange blotches to the south are ponds used in the mining process. They appear orange due to the high levels of hematite.

Further south, concentrations of magnetite give the Empire Mine tailings pond its bluish appearance. The two mines generate roughly $775 million in economic activity every year. 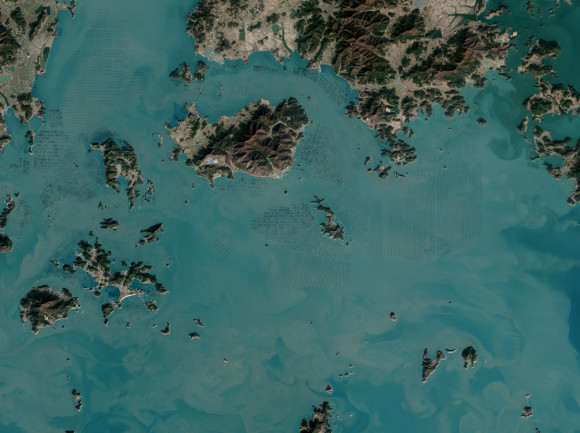 Those neatly arranged dark squares off the coast of South Korea are fields of seaweed.

Ninety percent of the country's seaweed crop is produced along its the southern coast. The seaweed grows on ropes tethered near the surface to ensure enough sunlight reaches the plants below. 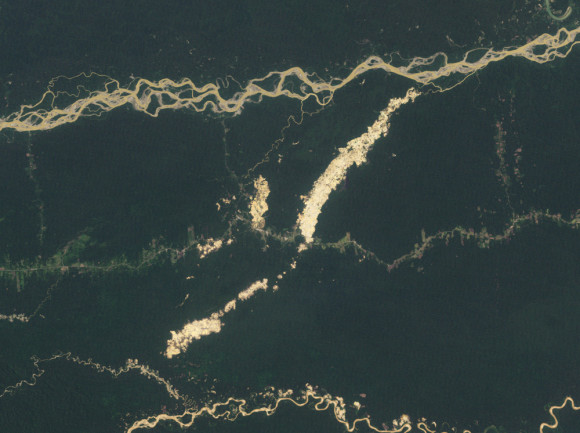 In the remote Madre de Dios region of Peru, gold miners created a path of destruction that extended from the river (top) to the Interoceanic Highway, seen in the photo's middle.

As the price of gold has soared, miners cleared 12,500 acres from the forest between 2003 and 2009, leaving behind a jagged, yellowish scar, as evidenced by this 2011 Landsat photograph.

Miners use mercury to extract gold from rocks. In the process, the mercury vaporizes, becomes airborne and eventually contaminates local water supplies. As a result, many people in the area suffered from mercury poisoning. 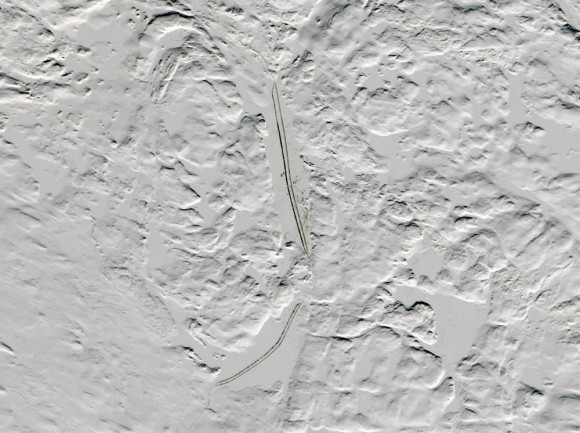 If you work in the frigid climes of northwestern Canada, your daily commute is like no other.

When the lakes freeze, crews plow snow off the surface to form frozen freeways, seen here as dark lines slicing through the white snow.

Trucks ferrying equipment to and from the Canadian mines travel at speeds of 15 to 35 miles per hour, depending on their payloads. The slower speeds prevent vehicles from generating ice-shattering waves by disturbing water beneath the surface.