Mammals Made By Viruses 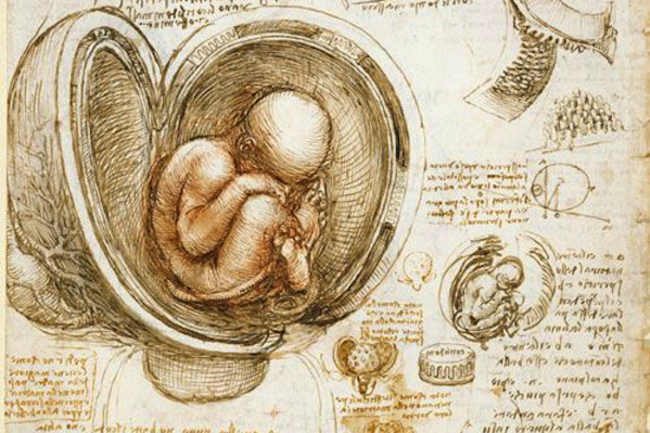 If not for a virus, none of us would ever be born.

In 2000, a team of Boston scientists discovered a peculiar gene in the human genome. It encoded a protein made only by cells in the placenta. They called it syncytin.

The cells that made syncytin were located only where the placenta made contact with the uterus. They fuse together to create a single cellular layer, called the syncytiotrophoblast, which is essential to a fetus for drawing nutrients from its mother. The scientists discovered that in order to fuse together, the cells must first make syncytin.

What made syncytin peculiar was that it was not a human gene. It bore all the hallmarks of a gene from a virus.

Viruses have insinuated themselves into the genome of our ancestors for hundreds of millions of years. They typically have gotten there by infecting eggs or sperm, inserting their own DNA into ours. There are 100,000 known fragments of viruses in the human genome,  making up over 8% of our DNA. Most of this virus DNA has been hit by so many mutations that it's nothing but baggage our species carries along from one generation to the next. Yet there are some viral genes that still make proteins in our bodies. Syncytin appeared to be a hugely important one to our own biology. Originally, syncytin allowed viruses to fuse host cells together so they could spread from one cell to another. Now the protein allowed babies to fuse to their mothers.

It turned out that syncytin was not unique to humans. Chimpanzees had the same virus gene at the same spot in their genome. So did gorillas. So did monkeys. What's more, the gene was strikingly similar from one species to the next. The best way to explain this pattern was that the virus that gave us syncytin infected a common ancestor of primates, and it carried out an important function that has been favored ever since by natural selection. Later, the French virologist Thierry Heidmann  and his colleagues discovered a second version of syncytin in humans and other primates, and dubbed them syncytin 1 and syncytin 2. Both virus proteins seemed to be important to our well-being. In pre-eclampsia, which gives pregnant women dangerously high blood pressure, levels of both syncytin 1 and syncytin 2 drop dramatically. Syncytin 2 also performs another viral trick to help its human master: it helps tamp down the mother's immune system so she doesn't attack her baby as a hunk of foreign tissue.

In 2005, Heidmann and his colleagues realized that syncytins were not just for primates. While surveying the mouse genome, they discovered two syncytin genes (these known as A and B), which were also produced in the same part of the placenta. This discovery allowed the scientists to test once and for all how important syncytin was to mammals. They shut down the syncytin A gene in mouse embryos and discovered they died after about 11 days because they couldn't form their syncytiotrophoblast. So clearly this virus mattered enormously to its permanent host.

Despite their name, however, the primate and mouse syncytins didn't have a common history. Syncytin 1 and 2 come from entirely different viruses than syncytin A and B. And the syncytin story got even more intricate in 2009, when Heidmann discovered yet another syncytin gene--from an entirely different virus--in rabbits. While they found this additional syncytin (known as syncytin-Ory1) in a couple different species of rabbits, they couldn't find it in the close relative of rabbits, the pika. So their own placenta-helping virus must have infected the ancestors of rabbits less than 30 million years ago. 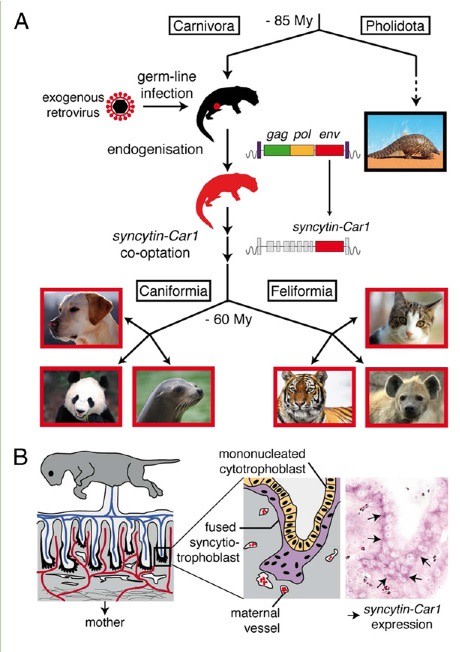 Now Heidmann has found yet another virus lurking in the ancient history of mammals. This one is in dogs and cats--along with pandas and hyenas and all the other mammals that belong to the so-called carnivoran branch of the mammal tree. In every carnivoran they've looked at, they find the same syncytin gene, which they named syncytin-Car1. In every species it is strikingly similar, suggesting that it's experienced strong natural selection for an important function for millions of years. But it's missing from the closest living relative of carnivorans, the pangolins. The diagram here, from the authors, shows how they see this evolution having unfolded. After the ancestors of carnivorans split from other mammals 85 million years ago, they got infected with a virus which eventually came to be essential for their placenta.

The big picture that's now emerging is quite amazing. Viruses have rained down on mammals, and on at least six occasions, they've gotten snagged in their hosts and started carrying out the same function: building placentas. The complete story will have to wait until scientists have searched every placental mammal for syncytins from viruses. But in the meantime there is something interesting to consider. Some mammals that scientists have yet to investigate, such as pigs and horses, don't have the open layer of cells in their placenta like we do. Scientists have come up with all sorts of explanations for why that may be, mainly by looking for differences in the biology of each kind of mammals. But the answer may be simpler: the ancestors of pigs and horses might never have gotten sick with the right virus.

(For more information on our inner viruses, see this 2010 story I wrote for the New York Times and my book from last year, A Planet of Viruses.)