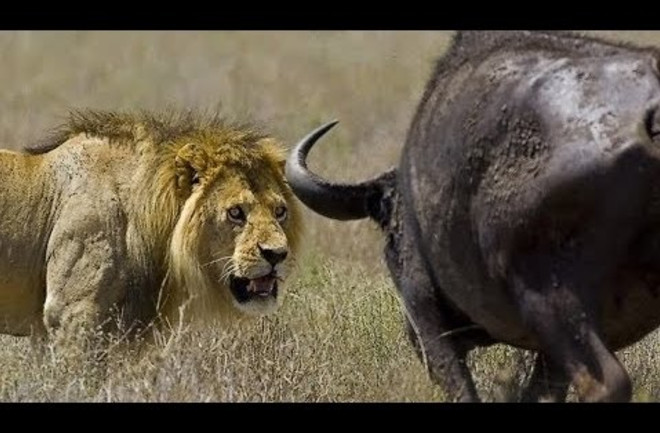 A still from a YouTube video captures the classic predator-prey faceoff: the comparatively bigger-brained lion against a horned wildebeest. Credit: Wildlife Safari TV. The arms race between prey and predator has been around since the first time one microbe evaded another; it's a never-ending spiral of adaptations to be faster, stronger or better-defended. Now a new study looking at antipredator defenses across 647 species of mammals has found animals seem to have taken a couple different evolutionary paths to avoid being eaten. Each path came with a trade-off, however. According to the paper published today in Proceedings of the Royal Society B: Biological Sciences, mammals evolved antipredator defenses in one of two directions: bigger brains or brawnier armor, be it horns, quills, plating, stinky sprays or grenade launchers (okay, kidding on that last one). We've long known that brains are high-maintenance, or "metabolically expensive" in scientific parlance. That gray matter needs high-quality fuel and a lot of it to perform. Researchers have looked at numerous ways animals — including humans — have taken energy away from other needs to devote it towards building and maintaining ever-bigger brains. (Although, here's a fun fact: one of those "big brain" theories took a hit last week when a team announced they found no correlation between bigger brains and reduced tooth size in hominins, which we had long thought was the case. Hey folks, it happens. The advance of science is not a straight line, it's a zig-zag.) Until now, researchers hadn't really looked closely at whether some animals evolved a different strategy for survival: devoting more energy to physical defenses and less to bigger brains.

The pangolin, for example, evolved scales made of keratin all over its body — the scales clock in at up to a third of the mammal's body mass. That kind of weight requires a lot of energy to haul around and pangolins, ah, not to put to fine a point on it, but they aren't the sharpest crayons in the box. Armadillos, while not closely related to pangolins, take a similar approach: brawny body armor but smaller brain.

Pangolins, like this scaletastic fella at Madikwe Game Reserve in South Africa, are among the mammals that traded brains for brawny defenses. Credit: David Brossard/Wikimedia Commons. To be clear, the researchers were not simply comparing brain sizes. They used the Encephalization quotient (EQ), which plugs brain mass relative to body size into an equation to come up with a single number that can be compared from one species to the next. Humans, for example, have an EQ of 7.4-7.8. Pangolins have an EQ of a mere 0.54 and armadillos aren't much brainer at only 0.629. Interestingly, when the researchers looked back in the fossil record at horn- and scale-free ancestors of several of the modern animals that do sport physical defenses, they found that most of these earlier species had higher EQs: more evidence that some animals evolved to spend energy on antipredator defenses over brains. The distant, undefended pangolin ancestor Ferae, for example, had a somewhat more impressive EQ of 1.007. The negative relationship between EQ and defenses was statistically significant across all mammal groups.

When It Pays To Be Dumb

Why on Earth would an organism skip out on the option of a bigger brain in favor of physical defenses? The key phrase here is "on Earth." The researchers found that the animals that seemed to be doing well with better defenses and smaller brains tended to be mid-sized, terrestrial insectivores that lived in open environments. It's possible that, given their lifestyle, the animals don't need to be constantly checking out their surroundings, on guard for predators. It might make better sense for them to just do their thing, knowing that, should a predator happen upon them, it will be dissuaded from making a meal out of them after getting a faceful of barbed quills or other unpleasantries.

Ah, mon amour, some mammals, they do not need these quills or scales or other such theengs. No, no, my dear, their special, ah, parfum, is enough to keep away the beasties. Credit: Looney Tunes.

The Mammals In the Middle

The researchers did find an exception to the smaller brains v. better body armor trade-off: Animals that live in trees had higher EQs regardless of built-in physical defenses. The authors theorize the complexity of arboreal life, with its added planes of movement, requires higher baseline cognitive abilities than just moseying around on the ground. Arboreal and semi-arboreal members of the porcupine and skunk family, for example, had larger brains than their grounded relatives and, in many cases, less elaborate body defenses. Arboreal porcupines, for example, have smaller and finer quills than those that are terrestrial — a logical adaptation given that the animals would have a harder time moving in the trees rocking a full set of giant quills.

The more elaborate quills of terrestrial porcupines make for a better defense, but not much fun trying to climb trees. Credit: C-8/Wikimedia Commons. Aside from the tree-living exceptions, the authors believe their research shows that, ultimately, well-defended species need less fancy brain matter for predator detection and evasion, and spend energy instead on their elaborate defenses.