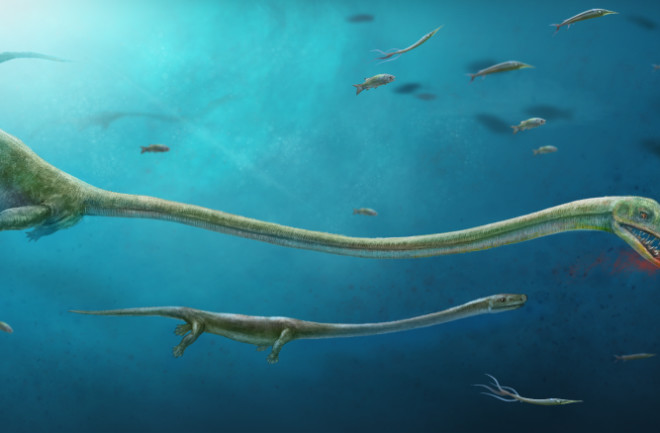 What do I love most about this artist rendering of a pregnant Dinocephalosaurus? Is it capturing the marine reptile's epic neck-to-body proportion? Is it the tasteful allusion to the offspring in her belly? No, it's the freshly chomped fish in her mouth, and the bloody cloud around it. Nom nom nom. Don't mess with Mom when she's hungry. Credit: Dinghua Yang & Jun Liu. Here's some egg-citing news: for the first time in the fossil record, researchers have discovered a specific type of marine reptile that was carrying an advanced embryo at time of death. Why is that interesting? Because the specimen is an archosauromorph, an early member of the same gang of vertebrates that includes dinosaurs as well as pterosaurs, birds and crocodiles, all of which we thought, based on previous evidence, were exclusively egg-layers. Today that changes. Some 245 million years ago, Dinocephalosaurus was a marine reptile swimming around what's now southwest China. Paleontologists have found other examples of this ridiculously long-necked animal, but this one in particular met her maker with a developmentally advanced embryo in her abdominal cavity — providing science with the first example of viviparity in an archosauromorph.

Aside from being a great weapon to have in your arsenal when playing Scrabble, viviparity just means giving birth to live young rather than oviparity (egg-laying). Viviparity has evolved a number of times among vertebrates, from lizards to mammals, but has never before been seen in the archosauromorphs, a rather large group of animals that emerged about 260 million years ago and eventually evolved into archosaurs, more famously known as things like dinosaurs and pterosaurs, the great and diverse flying reptiles. Birds and the various crocodilians (crocodiles, alligators, caimans, etc.) are the only archosaurs still wandering about, and all are oviparous.

I can hear a few of my more cynical readers grumbling over their keyboards "how do we know this is an embryo and not just a cannibalistic snack?" Right back atcha with findings from the paper, which ruled out both cannibalism and superposition (the possibility the two were separate individuals that died at the same time and were fossilized one atop the other). The case against superposition: The fossilized embryo is completely enclosed by the fossilized adult, which means it must have been inside Mom when she died. The case against cannibalism is a little more complex, but stay with me. The embryo is oriented with its neck pointing forward. For these marine reptiles, however, prey is typically swallowed and digested head-first, or neck pointing backward. In fact, the researchers did find a partially digested fish in the same mama fossil, in her abdominal cavity (not the Reptowomb location of Junior's fossil), that had been swallowed and was moving along her digestive system head-first. Want more evidence? Okay. The embryosaurus was curled in the typical fetal position, there was no evidence of eggshell anywhere around the fossil, and its baby bones were well ossified, which means it was in an advanced developmental stage; egg-laying animals drop baby bombs in significantly earlier stages of development.

Today's study, published in Nature Communications, is the earliest evidence we've got of the whole babymaking process for archosauromoprhs by about 50 million years. And understanding the reproductive biology of these animals, including dinosaurs, furthers our knowledge of how they lived, and maybe even why they went extinct. Researchers thought for a long time, given what they were seeing in the fossil record, that dinosaurs, birds and crocodilians laid eggs because there was something in their archosauromorph biology that prohibited live births. (Fun fact about crocodilians in particular: it's after the egg is laid, and based on the ambient temperature as it incubates, that the sex of the babycroc is determined. Obviously that's different than in viviparous Dinocephalosaurus. Since its offspring developed at body temperature, the sex of an individual Dino-c must have been determined genetically as it is for humans and other viviparous sorts.) Because we now know at least one species of archosauromorph gave birth to live offspring, it suggests the lack of viviparity in later archosaurs was an adaptation to their environment, or provided some advantage not yet identified. Or maybe the fossil of a viviparous archosaur is somewhere out there, just waiting to be found.

A less dramatic illustration of Dinocephalosaurus based on a different fossil specimen in situ. Credit: David Peters/Wikimedia Commons.