Paleontologists seek the secrets of dinosaur sexes. They're making progress figuring out how male and female dinosaurs differed. 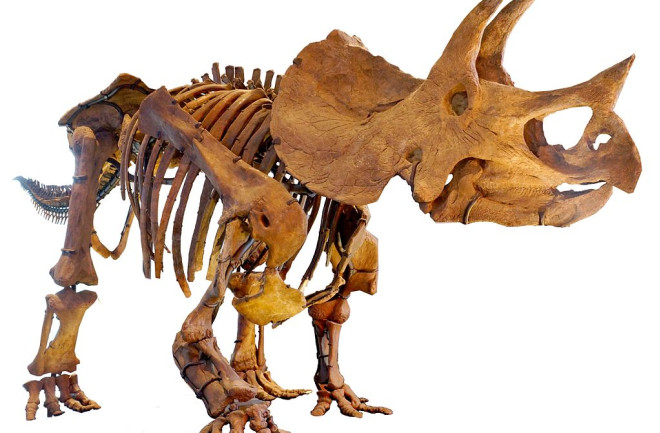 How do you sex a dinosaur? The answer isn’t to be found in the pages of books like Ravished by the Triceratops or Chuck’s Dinosaur Tinglers. Not to mention that the fossil record has, so far, been silent on the mechanics of dinosaur reproduction. What paleontologists are asking is how we can distinguish dinosaur sexes from each other and what those biological basics might tell us about the “terrible lizards.”

Paleontologists have been trying to identify female and male dinosaurs for decades. Experts have proposed all sorts of tell-tale signs, from ornamentation on the skull to the spacing and angle of splint-like bones beneath the tail. What researchers want are signs of sexual dimorphism, or traits that can distinguish one sex from another.

Sexual dimorphism can take many forms. Sometimes it’s a matter of size, with one sex being larger and another being smaller. Other times the giveaway is ornamentation — brighter colors, more ornate feathers or other features helpful for display.

But when paleontologists look at non-avian dinosaurs, or all dinosaurs other than birds, the bulk of the record is bones. On top of that, most dinosaur skeletons are incomplete and are scattered through space and time. Even though Tyrannosaurus rex, for example, is known from more than 50 skeletons, those fossils have been found from Saskatchewan to New Mexico in rocks spanning two million years. That’s far from a population-level perspective needed to pick out any sex-based basics.

Read more: How Did Dinosaurs Have Sex?

For a time, it seemed that non-avian dinosaurs didn’t show sexual dimorphism. No single case could be confirmed. That seemed strange, especially because many modern birds and reptiles show sex-based differences. “Does this mean that dinosaurs were biologically unique among vertebrates,” asks Field Museum paleontologist Evan Saitta, “or that something is going on within the community of dinosaur researchers about how we approach this topic?”

The answer is starting to come into view, and it has more to do with the process of science than the animals themselves. “Sometimes there’s a country mile between what we know and what we can say,” says paleontologist Lisa Buckley. Dinosaurs probably were sexually dimorphic, like many modern animals, but the question remains of how to reliably detect those differences.

The discovery that some dinosaurs have bone tissues related to reproduction has been a major help. In 2013, researchers threw a gender reveal party for a Cretaceous bird called Confuciusornis sanctus that flew over the heads of other dinosaurs over 120 million years ago. Paleontologists have found hundreds of specimens of this crow-sized bird, but not all of them look alike. Some specimens have long, streamer-like feathers extending from the tail; others don’t. And, as it turns out, that trait is a sex-based difference. One of the fossils without tail streamers had a special tissue inside its skeleton called medullary bone that only forms when female dinosaurs were laying eggs. That means the Confuciusornis without the streamers are females and the ones with the long feathers are males. That tracks with many modern birds, where males are sometimes more ornate and colorful than females.

But Confuciusornis is an avian dinosaur, known from dozens and dozens of fossils. What about all of our favorite non-avian dinosaurs, like Stegosaurus and Apatosaurus?

Clues like bone tissue related to egg-laying, or even finding eggs still inside dinosaurs, are going to be important to solving the mystery. The way forward, says Canadian Museum of Nature paleontologist Jordan Mallon, is tying reproductive clues to other obvious traits in the rest of a dinosaur’s body. If members of a horned dinosaur species have different horn shapes, and a particular horn shape is tied to dinosaur individuals that have egg-laying tissues, that relationship can reveal which dinosaur sex is which.

The problem is that eggs and medullary bones only identify gravid female dinosaurs. Detecting male dinosaurs or non-reproducing females is much more challenging. Not to mention that dimorphism isn’t necessarily stark. “Extreme magnitudes of dimorphism are not necessarily common,” Saitta says, pointing to living birds as an example. In birds that show sexual dimorphism in body size, there’s often only about a 10 percent difference in average body mass. That would be difficult to detect in the fossil record, especially given that nature is variable and any given male or female might be larger or smaller than average.

Being able to pull out these differences hinges upon how fossils are analyzed and compared. Some number crunching with statistics, for example, can measure how much dinosaurs differ from each other and estimate the likelihood that those differences are due to sex. Working with relatively small sample sizes, the method can help identify which dinosaurs probably had noticeable sexual differences to those that don’t seem to show much at all in their skeletons.

Mallon notes that the approach might over-detect dimorphism, but that the work “shows promise” and will help move the discussion forward. And, given that the fossil record has a habit of surprising researchers, new finds might add new information about what to look for. Now that paleontologists can detect the colors of some feathered dinosaurs, for example, they can start to dig into whether some dinosaur species had sexes that were skeletally identical but wore different color patterns.

All of this effort isn’t just about labeling dinosaurs by sex, though. Unlocking this aspect of dinosaur biology opens up many more avenues of questioning and study. “We would stand to learn a lot about dinosaur social structure,” Mallon says, as the degree to which a species displays sexual dimorphism is often related to whether the animals are more social or solitary. It might also be possible to tell whether one of the sexes fought more — like how tyrannosaurs bit each other on the face and Triceratops locked horns — or which dinosaurs parents cared for their eggs.

Comparing ancient dinosaurs to their modern counterparts would be critical. “It’s not a one-size-fits-all scenario,” Buckley notes, especially given that some birds — like spotted sandpipers — have boldly-colored females and males that sit on the nest. All the same, Buckley notes, “Sexual dimorphism, whether it’s flashy or cryptic, is a huge part of the lives of present-day birds.” The same was true for non-avian dinosaurs, especially as each generation added to an evolutionary epic stretching over 235 million years. As Mallon puts it, “Knowing the sexes would arguably open up a whole new field in a way that we previously didn’t think was possible.”