Dinosaurs must have had sex to reproduce — but how they did the deed isn’t exactly clear. 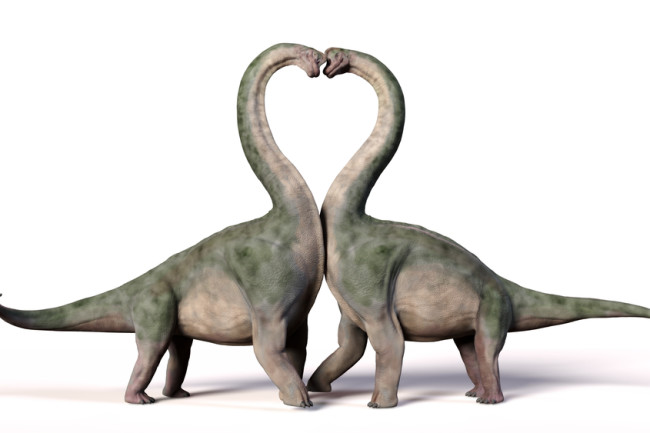 An illustration of a Brachiosaurus couple. (Credit: Dotted Yeti/Shutterstock)

Dinosaurs made other dinosaurs. The duration of their presence makes that clear enough. But how did dinosaurs go about courting and mating with each other?

No one has found two dinosaurs lovingly intertwined just yet. Nor has anyone found dinosaur tracks or traces that record the act. But the fossil record has provided the bookends to these critical moments.

Even though we can’t see non-avian dinosaurs in the flesh, trace fossils found in Colorado and elsewhere record at least one species’ courtship ritual. Scratch marks in the ground — not unlike those made by some modern ground-dwelling birds — give us a clue that some dinosaurs probably showed off to potential mates.

And all dinosaurs laid eggs. No one has found evidence of dinosaurs giving live birth — and, just like some birds today, dinosaurs laid clutches of multiple eggs. Whether we ever fill in the middle moment of this sequence is up for the fossil record to decide.