The big cats are on the rebound in California, but urban development threatens their comeback. Can wildlife crossings under highways ensure their survival? 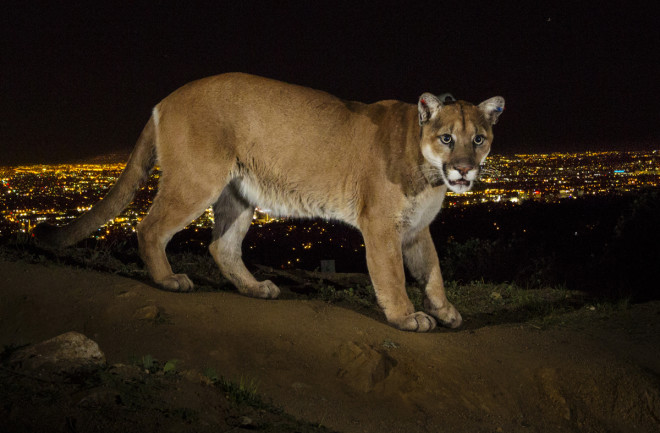 To catch a cougar, University of California, Santa Cruz field biologist Paul Houghtaling recommends roadkill. Deer, to be precise, preferably aged for less than a week. Post a motion-activated camera nearby and be patient: Once cougars find the prize, they usually return to feed several nights in a row.

On a cool California night in early April, Houghtaling set up his remote camera in the mountains above Santa Cruz at Laurel Curve, a popular spot for cougars and their prey. A few hours later, the camera captured a young cougar chewing on the deer carcass. The next day, Houghtaling and a team of biologists hauled a box trap the size of a small phone booth into the brush and dragged the deer inside.

At 7 p.m., just as the sunlight was fading from the sky, a transponder on the trap signaled that the young male from the night before was back for seconds. “We didn’t have to wait very long at all,” Houghtaling says.

After tranquilizing the cougar using a long pole, they lay the 100-pound animal on a tarp, drew blood for DNA analysis, tagged the cat’s ear and strapped a high-tech collar equipped with a GPS device and motion sensor around its neck.

A few hundred yards from where they worked, evening rush hour on California’s busy Highway 17 was just winding down. For commuters and beachgoers, the 23-mile stretch of road is a critical connection between Silicon Valley and the Pacific Ocean. But for the hundred or so cougars living in the rugged Santa Cruz mountains, the four-lane thoroughfare, divided in places by tall medians, is a formidable barrier that threatens their long-term survival.

Typical adult male mountain lions need about 100 square miles to call their own. But the highway makes it nearly impossible for cougars in different areas to mingle and for young males to disperse. Fourteen mountain lions have been hit and killed trying to cross Highway 17 since 2007, three of them near Laurel Curve.

“Males wander around looking for vacant territory,” Houghtaling says. “They’re just looking for a home.” In one extreme case elsewhere, a male ventured from the Black Hills to Connecticut.

Cougar numbers in California have risen after a state ban on hunting, and the cats are struggling to find territory in densely populated regions like the San Francisco Bay Area and Los Angeles. In the Santa Monica Mountains near LA, the fragmentation of cougar habitat has gotten so bad, there’s been a spike in cougar-on-cougar violence and inbreeding.

The data from captured Santa Cruz mountain lions in recent years show preserving and reconnecting patches of habitat is key to their health and long-term survival. Now, local officials and biologists in the Bay Area are using that information to create what they hope will be a new lifeline for the cats: a wildlife crossing under Highway 17.

The project, overseen by the California Department of Transportation and expected to cost at least $10 million, is essentially a large tunnel. The Land Trust of Santa Cruz County, a local conservation group paying for part of the project, is also protecting key habitat on both sides of the highway through land purchases and easements.

Houghtaling and his team hope the new cougar connector will bring the Santa Cruz cougars some much-needed room to move — and spare them the fate of their cousins down the coast.

A Cage of Freeways

Mountain lions once roamed over large parts of North and South America, from the tip of Patagonia to the southern fringes of Alaska — the largest north-south distribution of any mammal in the Western Hemisphere. Called by many names — puma, panther, cougar, mountain lion, catamount — Puma concolor has earned the enmity of ranchers and farmers, who hunted the cats for centuries. Today, cougars are essentially extinct east of the Mississippi, except for a small, badly inbred population of Florida panthers, a subspecies, in South Florida.

In California, a 1972 moratorium on hunting cougars for sport has helped the state’s population rebound, though exact numbers are hard to come by. (Landowners can still obtain permits to kill cougars that prey on farm animals.) But as one threat has diminished, another has worsened: development.

The consequences of cougar overcrowding in fragmented habitat are painfully clear just 300 miles south of the Santa Cruz population, where biologists struggle to save about 12 mountain lions in the Santa Monica Mountains above LA.

To the north and east, the 245-square-mile mountain range is hemmed in by highways 101 and 405, two of the busiest roads on the planet. In the past 13 years, just two collared cats have made it across Highway 101’s 10 lanes of traffic.

Effectively trapped in a cage of freeways and the ocean to the south and west, the Santa Monica cougars are turning on each other. In a study published last year, National Park Service wildlife ecologist Seth Riley described unusual, destructive behavior. “Adult males are killing close relatives, and there’s father-daughter inbreeding,” Riley says.

In the Everglades, after the Florida panther population dropped to just 20 animals in the 1970s, the decline in genetic diversity got so bad it was visible. Animals were born with holes in their hearts, undescended testicles, kinked tails and other physical abnormalities.

Biologists warn that if land managers don’t find ways to connect islands of habitat isolated by human settlement, the toll on genetic diversity could be drastic — and not just for cougars. “Connectivity is important for everything,” says Riley. “Mountain lions are the most vulnerable, but we’ve seen inbreeding in bobcats, lizards — even a bird species.”

The Santa Cruz tracking program, begun in 2008 by a coalition of conservationists and biologists and led by Wilmers, has tracked 60 animals since its inception, 19 of which are still alive. The collars use cell phone signals to upload GPS coordinates in text-message form once a day. (“The cats are all on a family plan through AT&T,” Houghtaling says with a laugh.) Many are also equipped with accelerometers, motion-sensitive devices that show not just where the cougars are but what they’re doing.

By combining Wilmers’ GPS and accelerometer data with roadkill records and camera traps, biologists and transportation planners can get detailed information on where and why cats are trying to cross the region’s major roads. The site at Laurel Curve where Houghtaling set his trap in April appears to be the sweet spot: The highway straddles a natural drainage, and the land on either side is largely undeveloped.

That information was key in getting state support for the crossing project. “We don’t want to be spending that much money on infrastructure that’s not going to work,” says California Department of Transportation biologist Nancy Siepel. “It helps to know if you’re putting things in the right place.” The data also allowed the Santa Cruz Land Trust to figure out what surrounding habitat to protect. (Project leaders expect to secure funding for the remaining deals by next summer.)

“Having data really helps,” says Houghtaling. “You can look at a map and have an intuitive sense, but having GPS locations from animals can do a lot to bring people together.”

The success of wildlife passages elsewhere suggests the Santa Cruz cougars will likely make good use of the corridor once it’s built. A study by researchers at the University of Tennessee on how cougars use wildlife passages along the Trans-Canada Highway in and around Banff National Park found the cats prefer underpasses to overpasses — particularly those near prime habitat.

In the future, Wilmers hopes, data on animal behavior will help inform development and infrastructure projects before they’re built — in California and beyond. “The Bay Area’s a preview of what the world might look like in 100 to 200 years,” he says. “Human development hasn’t shown much sign of abating. We have to understand how to do it smartly if we want to preserve our wildlife.”

This article originally appeared in print as "Making Room for Cougars."