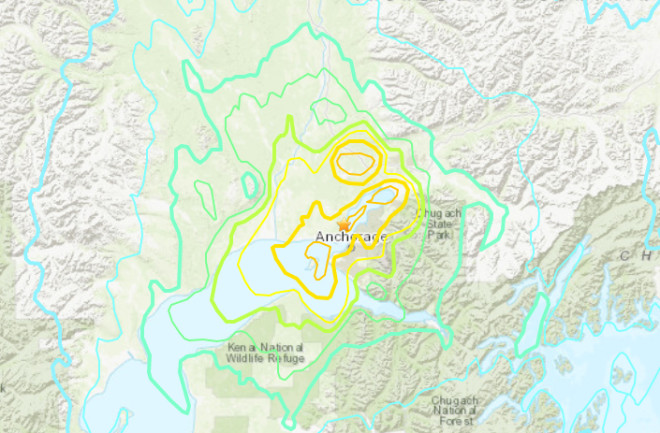 Shake map for the M7 earthquake that struck near Anchorage on November 30, 2018. USGS.

Earlier today a M7 earthquake struck only 13 kilometers from Anchorage, Alaska. The earthquake was relatively deep, located ~40 kilometers beneath the surface. However, the city of Anchorage has experienced damage from the shaking. Anchorage airport has seen disruptions as the control tower was evacuated (and had been apparently running out of a truck). The FAA stopped flights in and out of Ted Stevens Airport as well.

UPDATE: The M7 earthquake was followed by a number of aftershocks, with the largest so far being M5.7. There has been significant damage in Anchorage, but luckily it seems like no tsunami was generated by the temblor. Many homes and roads have been damaged, but so far there have not been any reported deaths due to the earthquake. Over 30,000 people are without power as well.

This video shows the shaking that happened in Anchorage during the earthquake:

Also, rumors of potential “predicted” larger earthquake to follow are false (as are any places that claim they “predicted” it in the first place. You can read statement from the Alaska State Seismologist:

Here is some more road damage from the earthquake:

UPDATE: The tsunami threat as passed. More importantly, a tsunami warning was declared for the coast of Alaska, so people are trying to evacuate the area. However, a Pacific-wide tsunami is not expected according to the Pacific Tsunami Warning Center.

Roads in and out of Anchorage look damaged as well:

Images of some of the damage in Anchroage include the newsroom for KTVA:

Some evidence of the shaking was seen in placves like lakes with 8″ of ice on the surface:

The roads around the airport have also been damage due to the intense shaking from this earthquake (as the shake map above can attest).