Lost or Found? A Stick Chart From the Marshall Islands 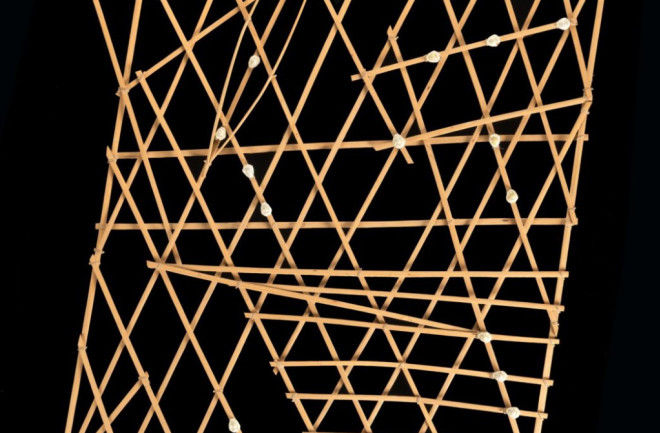 It would be hard to guess, but this arrangement of bamboo sticks and cowrie shells makes up a map of the ocean and the greater Marshall Islands region. (Credit: A.926.1/DMNS)

In a recent blog post, I focused on the Global Positioning System (GPS) and mused on how we ever got along without high-tech navigational aids. GPS units became common in cars and phones only in the last 15 years or so. I remember when a road trip required a stop at the local American Automobile Association office to gather free maps of the planned route. Likewise, I remember when well-traveled road warriors had at least one dog-eared copy of a Rand McNally Road Atlas in their cars. Those days are gone, and I miss them.My interest in maps dates back to the mid-1980s when I was in college. My late bibliophilic father, Edward G. Nash, invited me to a lecture on the history of maps at The Caxton Club, a private club in Chicago for book aficionados. I’ve long since forgotten the name of the speaker, but I never forgot the gist of his presentation. Historically, he said, to orient a map meant putting east at the top of the document. I was incredulous. How could that be? How could east be at the top of a map? North is up! North has always been up! That’s the natural order of things, right? On the contrary. Any direction or landmark can be placed at the top of a map. It’s up to the mapmaker and what that person seeks to convey. Ever since then, I’ve loved the fact that maps are relative, powerful, and inherently political documents. The Denver Museum of Nature & Science curates a wonderful object that again challenged my preconceived notions. It’s a “stick chart” of the greater Marshall Islands region in the South Pacific. Located about 2,500 miles southwest of Hawaii and 1,900 miles northeast of Papua New Guinea, the greater Marshall Islands region includes 29 coral atolls and five coral islands scattered along two parallel chains that stretch from northwest to southeast in lines roughly 500 miles long. At sea level, and to the uninitiated, the area seems a confusing mix of terribly small islands dispersed across large and dangerous expanses of open ocean. The stick chart, known locally as a rebbelib, is made of bamboo sticks and cowrie shells arranged across a trapezoidal frame. Whereas the arrangement of sticks and shells may appear haphazard, it’s not. The sticks represent ocean currents, wind patterns, and wave swells well known to Marshallese navigators. The cowrie shells represent island groups, not individual islands. Taken together, the bamboo sticks and cowrie shells constitute an abstract navigational chart of the Marshall Islands region. The stick chart is a map! Even more remarkable than the artifact is the apprenticeship and testing required to become a fully sanctioned ri-meto, or navigator, in Marshallese society. After years of practice and experience, an apprentice is blindfolded and taken in a canoe to a remote, undisclosed part of the ocean, far from any point where land is still visible. He’s told to lie down in the bottom of the canoe. His blindfold is removed, so he’s only able to see the daylight sky above. He stays there, motionless, literally feeling his way across the currents and swells. The canoe acts as an extension of his body, amplifying the maritime signals as they reverberate across its wooden planks and crossbeams. His job is to determine his location by comparing the influx of tactile data to his cognitive map. Once oriented, he’s allowed to rise and sail to where he thinks land should be. The proof is then in the pudding—either he makes landfall or doesn’t. Anthropologist Joseph Genz recently documented the efficacy of this technique through controlled experiments, but proof also exists in the archaeological record. Archaeologists have determined that even the most remote Pacific islands were inhabited by human beings long before the advent of modern navigational techniques. We know that Australia, the island continent, was inhabited more than 50,000 years ago. This is despite the fact that Australia was never connected to Southeast Asia by a land bridge, not even during the peak of the last ice age about 20,000 years ago. In short, humans got to Australia by crossing dozens of miles of open water in some kind of seaworthy vessel. That didn’t happen by accident. We know that humans inhabited Easter Island by about A.D. 400. Located 2,300 miles west of Chile and more than 2,500 miles east of Tahiti, the island is arguably the remotest place on Earth. How did people get there? They almost certainly made use of celestial navigation techniques for such long-distance voyages, but they also almost certainly used objects like stick charts to document the regional geography. That didn’t happen by accident either. Give credit where it’s due. So the next time Siri says you missed a turn, be grateful that you’re not blindfolded in the bottom of a canoe. And remember that humans have successfully used many different navigational techniques to explore this wonderful planet over the millennia. Enjoy the trip!