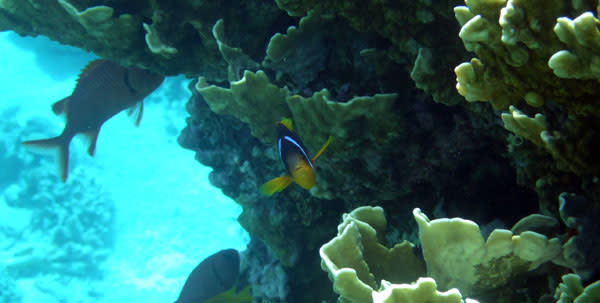 If you think the stars of Pixar’s Finding Nemo had it rough, spare a thought for the plight of real clownfish. These popular fish may struggle to survive in oceans that are becoming enriched with carbon dioxide. High levels of CO2 dissolved in the water can muddle a clownfish’s sense of smell, preventing it from detecting both shelter and threats. Philip Munday from James Cook University has shown that at levels of carbon dioxide within what’s predicted for the end of the century, a clownfish’s ability to sense predators is completely shot. Some larvae become literally attracted to the smell of danger and start showing risky behaviour. It’s not surprise that they die 5-9 times more frequently at the mouths of predators. The conditions that Munday simulated in his experiment aren’t too far away. Thanks to the carbon dioxide that human activities produce, carbon dioxide levels in the atmosphere are predicted to reach 500 parts per million (ppm) by the middle of this century, and between 730-1020 by its end. Much of this gas dissolves in the oceans, making them more acidic. In the past two centuries, the pH value of the world’s oceans has fallen 100 times faster than any time in the past 650,000 years. The actual fall in pH values seems quite small – just 0.3-0.4 units, barely visible on a litmus test. But this tiny difference can have a big impact on marine life. It depletes the water of ions that corals and shellfish need to build their shells and reefs. But Munday has shown that fish suffer too. Last year, he showed that when carbon dioxide levels in the water go up, baby clownfish lose their ability to find their way home. Contrary to Finding Nemo, young reef fish grow up in the open ocean, far away from their birthplace. They rely on their sense of smell to swim home, but with that sense baffled by CO2, they could end up anywhere. Now, Munday has shown that even if they pass this trial, they still face a higher risk of blindly stumbling into a predator. He reared orange clownfish in water with carbon dioxide at 390 ppm (today’s level) or 550, 700 and 850 ppm (predicted levels in the future). He placed the babies in a straight arm of a Y-shaped tube, with the smell of a predator (a rock cod) wafting down one arm, and the smell of fresh danger-free water coming down the other. In today’s water, clownfish larvae strongly avoided the smell of the predator. They swam down the dangerous fork just 10% of the time early on in life, and avoiding it completely after 8 days. At 550 ppm of carbon dioxide, they responded in the same way. But at 700 ppm, only half of the larvae stuck to their cautious streak. The others developed a fatal attraction for the predator’s scent, pursuing it around 74-88% of the time. At 850 ppm, things were even worse. The young fish avoided the predator’s smell for just one day, but were strongly drawn to it from then on. After 8 days, every single fish swam towards the dangerous aroma. Munday showed that another common reef-dweller – Ward’s damselfish – was similarly affected. He caught wild larvae and put them through the same test. They behaved normally until they were kept in water with 700 ppm of carbon dioxide when half of the fish became attracted to predator smells, or 850 ppm when almost all of them became confused. This confusion proved to be a fatal one. After four days of testing, Munday placed the larvae back into natural enclosed reefs. Compared to fish that were kept in normal water, those that spent time in the CO2-swamped surroundings were bolder, more active and strayed further away from the reef. And they paid the price for their risky business. Within 30 hours, larvae that were kept in 700 ppm were 5 times more likely to be killed by predators and those kept in 850 ppm were 9 times more likely. It’s not clear why the young fish are so dramatically affected. It’s possible that CO2 is part of the chemical profile of a predator’s smell, so higher levels mask the presence of a threat. However, the fact that the fish showed riskier behaviour, and switched from avoiding to preferring the predator smells, tells us something deeper is going on. Munday suggests that the higher CO2 levels could affect the fishes’ neurons in a way that affects many different abilities – perceiving threats, activity, smell and more. It’s a mystery for future research. For now, the big question is whether reef fish can adapt to their changing environment. Munday thinks that levels of 700 ppm are close to the threshold that clownfish could adapt to. At those levels, only half of the larvae lived dangerously, which suggests that some individuals have a genetic advantage that keeps their heads straight when carbon dioxide reaches these heights. They are the ones who will prosper in an acidifying ocean. But at 850 ppm, every single fish was affected. If current trends continue, carbon dioxide concentrations could well reach these levels by 2100 and if that happens, Munday writes, “There seems to be little scope for adaptation... with serious, irreversible consequences for marine biodiversity.” Reference: PNAS http://dx.doi.org/10.1073/pnas.1004519107More on ocean acidification: