Living Relatives of Ötzi the Iceman Mummy Found in Austria 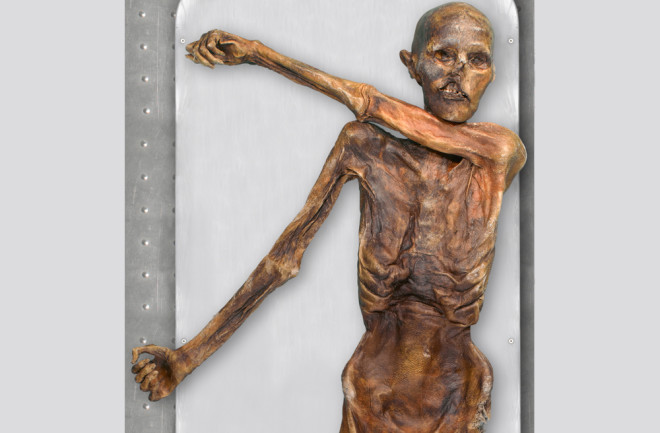 Although Ötzi the Iceman has been dead for 5,300 years, his legacy is still kickin’ in newly-found living relatives.

Researchers discovered the family members by performing DNA tests on blood donated by 3,700 people in western Austria, not far from the Alps where Ötzi was found melting out of a glacier in 1991. The results showed 19 of those donors shared a unique genetic mutation with the mummified ice man.

“These men and the Iceman had the same ancestors,” said forensic scientist Walther Parson in his announcement to the Austrian Press Agency.

Ötzi’s genome was sequenced in its entirety last year using a sample of hip bone. Scientists had used these initial findings to study how he was related to regional ethnic groups, but this time they were interested in narrowing it down by investigating how many individual people sprang from Ötzi’s line.

Since his maternal line is thought to be extinct, researchers looked at DNA from the mummy’s Y chromosome instead—genetic material passed down from father to child. This heritable, unchanging DNA was still found lurking in the genomes of Austrians alive today. Ötzi and his long-lost relatives fall into a rare European haplogroup and sub category (known as G-L91).

Each haplogroup represents an isolated population of ancient people whose unique genetic mutations can tie them to a particular geographical location—the Öztal Alps in this case—and early migratory routes.

This reconstruction of the Iceman shows his brown eyes, among other characteristics, as determined through genetic analysis.Image credit: South Tyrol Museum of Archaeology/EURAC/Marco Samadelli-Gregor Staschitz

This reconstruction of the Iceman shows his brown eyes, among other characteristics, as determined through genetic analysis. Image credit: South Tyrol Museum of Archaeology/EURAC/Marco Samadelli-Gregor Staschitz

The scientists have not yet informed the mummy’s relatives of their ancestral connection. But perhaps that’s for the better.

For starters, it could be tough to shoulder the fame of being related to such a renowned mummy. Plus, many of the Neolithic farmer’s traits are less than desirable: he had a genetic predisposition to heart disease, and suffered tooth decay, joint pain and lactose intolerance.

And although it can’t be passed on, there’s a good chance he was suffering from Lyme disease, too. (We won’t even get into inheritance of his striking Neolithic appearance…)

It’s unlikely that these 19 individuals are the only descendants of the Ötzi family. Researchers say they’re now expanding their search for this rare genetic mutation to nearby regions of Italy and Switzerland. One more reason to donate blood, then: do it for the Iceman.